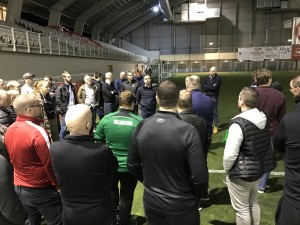 A team from Replay Maintenance were recently invited to deliver a seminar, entitled 'The Maintenance of Artificial Turf', to a select congregation at the Kórinn Stadium in Iceland.

As the take up of football increases in Iceland, so does the market for synthetic surfaces. The invitation came as a direct response from the talk given by Replay Director, Garry Martin, at the NEC last year.

The Icelandic event delivered knowledge, tips and promoted an active discussion around the topic of synthetic surface maintenance. It was held in Kópavogur, Iceland's second largest municipality by population, part of the Capital Region and lying immediately south of Reykjavík. The name literally means seal pup bay.

Head of Sports Fields in Kópavogur, Ómar Stefánsson, co-ordinated the event. "The 39 attendees were mostly caretakers of synthetic turf from communities and municipalities, both from the North of Iceland as well as the East Coast. One delegate doesn't have a synthetic pitch yet, but wanted to learn all about the maintenance before they install one."

The day began with a presentation where Garry discussed maintenance principles and the key tasks which should be conducted to protect the look, playability and safety of a synthetic pitch. Questions were then taken from the floor before delegates were divided into smaller groups to encourage open discussion. Following this, active demonstrations were conducted on the synthetic surface within the venue's football hall. Ómar again, "The delegates were very happy and thoroughly enjoyed the presentation given. All in all it was a very successful event."

Following the event Garry added, "It was a great privilege to be asked to speak at this event, where the topic of synthetic surface maintenance is rising in significance. I'm confident the information delivered will help with understanding the importance of maintaining artificial pitches, which can only be a good thing for sport in the country."