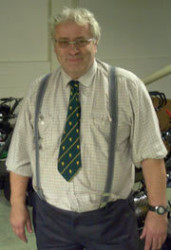 The first Allett mower was produced in 1965, but to tell the story properly I must take you back to 1919 and the death of my Grandfather, John Allett who was a Miller by trade, operating both a windmill and a watermill in the county of Rutland.

John's death coupled with the fact that my grandmother was crippled and unable to work, elevated my Father, Reg Allett, to the position of family bread winner at the tender age of seven years old.

His first job was polishing brass ornaments for the local doctor at a wage of six pence per week, this of course had to be done out of school hours. At the age of nine he found employment as an errand boy, for a shilling a week, at the ironmongers in Oakham, where he lived as a boy. This job lasted until he left school at the age of fourteen when he started full-time employment with the same company, as an apprentice in their lawnmower department.

His apprenticeship was cut short at the age of sixteen when the mechanic in charge of his training died prematurely. Father had by now proved his capabilities and was promoted to head of the department. This doubled his wages from 1s 3d to 2s 6d a week, for the youngsters amongst you that's 12.5 pence per week. Good money for a lad in 1928.

Shortly after this, Oakham Cricket Club ordered a new 24" Dennis Motor Mower. When it arrived Father took it along to the club to install it with the grounds man, who up to this point had used a 24" Greens Pony Mower. The word 'pony' in this context was not part of the name of the machine, it was in fact the animal that pulled it, the operator simply talked to the horse and steered the mower from behind. 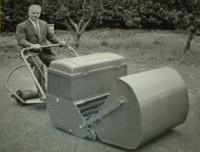 In those days of course there were no worries about the environment, the fuel for the horse was provided by the longer grass at the edge of the field and although the exhaust gasses were at times unpleasant for the operator, they did not damage the ozone layer. Further more the grass was fertilised and cut at the same time. I guess they were voting "Green" without knowing it.

The Groundsman although very good with his horse, was scared to death of his new petrol engine, which was started by inserting a handle into the side of the engine and cranking the thing over until it fired. If the manual timing lever was set in the wrong position, it kicked worse than the horse and in this particular case it broke the man's arm. From then on Father had to go along to start the mower every time the grass needed cutting. Pushing the starter button in his van one morning he thought to himself, "Why can't we have an electric start on a mower", and with this simple act the first seed was planted.

He stayed with the ironmonger until the war when he joined the RAF serving in the Far East until he was de-mobbed in 1946. 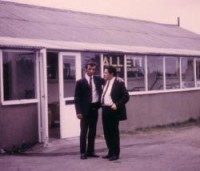 One of the product lines he took on was a range of garden cultivators and rotary mowers produced by Shay's of Basingstoke. This was quite successful for him for a number of years until production ceased in the early sixties. One of their representatives, a man named Dennis Selby, wanted to pick up where Shay's had left off and approached my Father to design for him, a cultivator and a rotary mower. This was done and they later became known as the M1 & M2, the Mountfield Range was launched and Reg Allett became their agent for the East Midlands. Dennis Selby never looked back, he built up a very good business over many years and eventually sold it all to Ransomes.

The domestic sales side of the Allett business became less viable in the sixties when supermarkets started selling domestic mowers at such low prices that a small mower dealer could not compete. Father then concentrated his efforts on the professional products in his range. The main part of which were 30" and 36" cylinder mowers, these were sold primarily to sports clubs but also to domestic customers with large lawns.

Most of the mowers sold resulted in one or more of the following complaints.

Firstly: Difficulty in starting the beast, the cranking handle was still in use and sprained wrists were not uncommon.

Finally: the lack of a reverse gear made the machine difficult to use in certain conditions.

To combat these problems Father modified machines before he sold them. A decompressor was fitted to the engine, to remove the risk of injury during the starting operation. The engine was also balanced to reduce the vibration, and a simple reverse gear was fitted. These alterations proved so successful that several of the mower company's directors visited our little premises in Stamford to inspect a modified machine. They agreed that the machine was much improved but said that they would not consider implementing the changes, as to do so would incur extra production costs. They felt that any changes were unnecessary because they were able to sell all of the machines that they could produce without doing so.

Father pointed out that if they did not improve the existing design another manufacturer would produce a better mower at a realistic price.

So, as I said earlier the first Allett mower was produced in 1965. I left school at this point as a fifteen-year-old and joined the company as I wanted to be in at the start of production. That first model was the Allett 36" MK1 powered by the Reliant 3 wheeler car engine and gearbox. Just imagine four cylinders, water-cooled, 29bhp, electric start, it was smooth, quiet, powerful and retailed at the same price as the range of mowers Father sold from the showroom. It wasn't long before the Allett mower became the Groundsman's choice. Other manufacturers suffered as a result and production at some of these plants ceased soon after.

This machine was aimed at the Sports Field market and very soon we were supplying all the test cricket grounds in England and many County Grounds along with some of the major football clubs and sports stadiums not only in the UK but also throughout Europe. Machines were also sold to some very prestigious lawn areas such as the Royal Palaces and many of the National Trust Establishments.

In 1978 the Reliant Motor Company were going through difficult times and we felt the need to change our engine supplier. We also wanted to develop our business from a company producing just the one model, to a company with a range of machines including 20", 24", 30" and 36" sizes. The new range was built and fitted with Kohler Engines and sold in the UK through the Kohler dealer network. This was quite a radical step for us and dramatically increased our sales to our existing customer base. At about this time my younger brother David, who started his working life as a professional cricketer with Leicestershire, left their employment due to a back injury and joined the company, now we really were a family business.

In December 1986 we moved to a new industrial unit in Corby and very quickly expanded the range to include both a 30" cylinder and a 30" rotary verge cutter. These were aimed at the local authority market and were very successful and our turnover increased accordingly. We also produced a 7'6" tractor mounted rotary roller mower called the Park Star. The original 20" and 24" mowers evolved into the present day Shavers and Tournaments for sports fields, bowls greens and golf courses. The next development was a family of 20", 24" and 27" mowers that we called our Buffalo range; these were designed primarily as a contractor's machine. In September 1992 we launched our belt drive triple machine, the Conqueror, which again sold very well for us.

A new era started in January 1994 when Allett Mowers was sold to Reekie Engineering and merged with Greens of Scotland, a company that Reekie Engineering already owned. There were several conflicting models in the two ranges so we rationalised things a little, this ended with the Allett range staying much the same with the addition of the Greens Ranger Gang Mower being re-badged and painted in Allett colours. Allett production remained in Corby for about eighteen months but everything was moved to a new factory in Arbroath, Scotland in 1995.

The sale of the company coincided with a decline in my Father's health and in his words, he took early retirement from the Board, at the age of eighty-two. For the next three years he was still very much involved with the business and was employed as a consultant right up until he died of cancer on September 30th 1995. David and I remained on the Board of Allett but whereas I moved to Scotland to enable me to operate from the factory, David stayed in the Midlands took on the role of Marketing Director, in addition to supervising the UK sales team, he spent much of his time out of the UK developing our overseas distributor network. 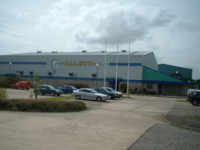 December 2000 saw the start of another new era for the company, David Allett left us to become the UK Sales Manager for Trimax Mowing Systems based in Northamptonshire and is now doing very well in that position, but Allett Mowers was no longer a family business. The company grew steadily over the next few months, increasing sales both here in the UK and aboard. Adding aeration machinery into our existing range of mowers required more space, so in September 2002 we moved next door into a larger production facility.

Allett continues to grow and the product range will increase again in the future but we are still constantly striving to achieve my Father's initial goal, 'a better mower at a realistic price'.

For further information on Allett mowers and machinery please call 01241 437740 or e-mail sales@allett.co.uk