0 Return to Stourhead for Terrain Aeration 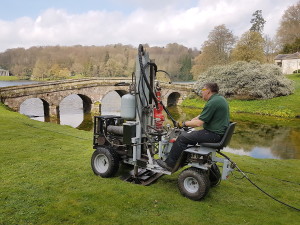 Many of the views at Stourhead, the Wiltshire estate cared for by National Trust since 1946, will be familiar from the 2005 adaptation of Pride and Prejudice staring Kiera Knightly. The estate was sold to wealthy banker Sir Henry Hoare in 1717 and today includes the Palladian mansion, built around 1725 and the village of Stourton. The world-famous garden was designed by Henry Hoare II and laid out in a classical 18th century design with a large lake.

Terrain Aeration, the deep penetration aeration company, was recently asked to return to Stourhead to carry out aeration work along the paths and lawns, having treated the areas some nine years ago. Following the paths around the lake takes you on a journey inspired by Greek mythology and scenes of the Grand Tour of Europe, so popular at the time of building. Over a number of days, Terrain Aeration carried out the work using their Airforce Terralift machine and the new SuperScamper Terralift, to relieve compaction and aerate the well-trodden routes.

The Terralift hammers a hollow probe one metre into the soil, releases a blast of compressed air and on the tail end of the blast dried seaweed is incorporated. This sticks to the walls of the fractures and fissures created and over time expands and contracts

with the moisture content to keep the fissures open. The process is repeated at two metre spacings on a staggered grid pattern with each shot interconnecting with the previous one. This is highly effective in treating areas where compaction and panning occur, causing standing water and affecting the grass growth. The Terralift was used predominantly at Stourhead to treat the daffodil lawn.

The SuperScamper, developed from the original Airforce Terralift, was used to treat the long strip between the path and lake, alongside the 'Grotto' and the 'Pantheon'. The machine provides the operator with greater versatility and less weight as the compressor is towed, making the machinery much lighter on the turf surface, and suited to difficult terrain. This was ideal for working on areas of heavy foot traffic from the thousands of visitors who follow the 'journeys' around the gardens, the temples and monuments erected in remembrance of family and local history. The monuments are cleverly used to frame one another, as with the Pantheon for example where, once reached, views from the other side of the lake beckon. Deep aeration helps to compensate for the heavy footfall over the areas where people move from one monument to the next, and towards the end of the week at Stourhead, Terrain also treated an area used as a romantic setting for wedding parties and ceremonies.