Woking Golf Club lies in the heart of rural Surrey and sits on the region's typical heathland. Phil Helmn MG paid a visit to meet with the club's Course Manager, Andy Ewence who is working on a rewilding programme to return the heathland characteristics to the course alongside rejuvenating tired and out of date bunkers. 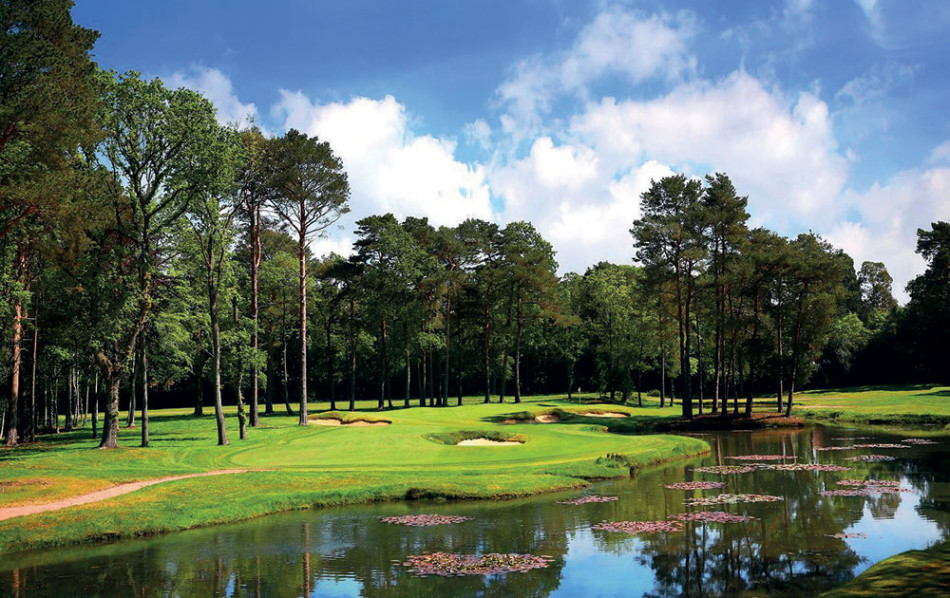 Woking Golf Club was founded in 1893 and financed by a group of London barristers who leased the land from the Necropolis Company. Located one hour south of London, Woking is in fact the first heathland course ever built, well before any of the other classically Surrey heathland courses were imagined. Tom Dunn was the original architect; however, he was not known for his bunkering or imaginative green complexes.

Although little of his work remains untouched at Woking (or throughout the United Kingdom for that matter), Dunn does in fact deserve the primary credit for today's hole routing. However, the changes undertaken by member Stuart Paton over nearly a forty-year period are what make Woking appealing. Woking is very much in the tradition of English golf clubs and retains its old character. The course has been lengthened in recent years and is now more than 6,500 yards from the back tees, however the real challenge of the course is the complexity of its undulating greens.

Woking is renowned for being greater than the sum of its parts in many respects, with no single standout golf hole. Instead, it has 18 fantastic holes that all flow well together in a routing that allows the golfer to play from different elevations and see all aspects of the course without being too taxing on the legs. That's important, because, at Woking, the club celebrates quick golf, and many of the club members, when asked about the current course record, simply reply '2 hours 28 minutes'! As a constant reminder, the clock (that sits proudly atop the clubhouse as well as being the club's iconic logo) is there to remind golfers coming through the 14th hole how they are faring against the Woking equivalent to 'par'! Andy Ewence and his team have been working even harder to reduce 'Time par' - more on that later! Woking is currently ranked 17th in the list of the top 100 courses in England as set out in the March 2019 issue of Golf World but, if I were a betting man, I'd be tempted to say this should only improve with the vast amount of work the club and team have completed recently.

Andy started as an apprentice at Pyrford Golf Club after leaving school. During his eight years, he worked his way up through the ranks to claim the deputy's position. During his tenure at Pyrford, he studied and attained both his NVQ 1 and 2 in greenkeeping and completed his spraying PA1, 2 and 6 levels certification.

From there, Andy moved to the prestigious Queenwood course as first assistant; a momentary drop in rank but gaining the Queenwood experience was extremely beneficial in understanding the importance of quality. Andy continued his learning by achieving both his HNC and chainsaw courses during his five years at the Surrey club. Following a short tenure at Burhill as deputy, Andy landed the prestigious role as course manager at The Buckinghamshire Golf Club where he was asked to raise the bar on the current course conditions.

Andy tells the story; "I proposed a redesign of the course and installation of a new Toro irrigation system. They sent me to Japan to meet with the directors of the Asahi where I had to present my proposal (which was going to cost £2.5 million). It must have gone well because they agreed to everything!" Andy explained. "I project managed the whole works working alongside Tim Lobb, who redesigned the alterations. We used the skills of four different contractor companies to complete irrigation, new bunkers all lined with blinder, reshaping of mounds and fairways, new concrete pathways and new sleeper edged lake banks."

I discovered that, even during that extremely busy time, Andy also managed to pass his CDM co-ordinators exam which allowed him to oversee all health and safety issues. Andy was, quite rightly, so very proud to tell me one of his greatest achievements once the course was completed, that he and his team successfully hosted four Ladies European Masters on Sky Sports Golf, two Ladies US Open Qualiﬁers and three Regional Open qualiﬁers. Impressive stats. I'm sure you agree!

Following the success of his achievements at The Buckinghamshire club, Andy successfully landed the lead role at Woking Golf Club. With his ever-present drive and determination, and his dedicated team, he got the club through to the final of the environmental awards for all the amazing work he and his team had achieved with their heather regeneration programme.

This quick success is no mean feat as Andy describes, "with heather, it can take years to germinate and, me being very impatient, I wanted us to look at ways of speeding up the process." Andy continued; "Instead of just spreading brashings (a combination of seed and vegetative matter) over our areas, we decided to sieve the brashings leaving almost pure seed pods. This allowed us to slit the ground to a depth of 2cm and drop seed directly into the ground which was far more beneﬁcial than simply spreading seed on the surface. Adding to this process we then sealed the area and found that, within three months, we had sprigs germinating in the lines." Not content with this successful process, Andy went on to experiment further. "We have also tried heating the seed and adding micronizing to improve germination speed; with trials still ongoing, it is looking promising." 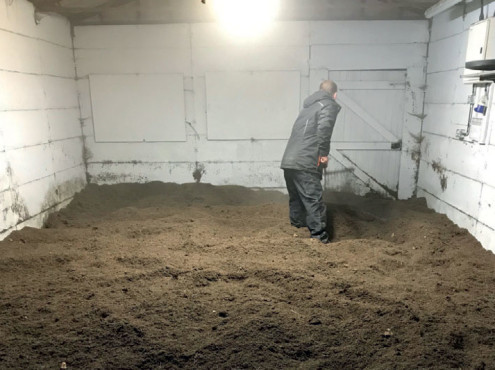 Andy has a history of working alongside the Surrey Wildlife Trust (whilst working at Queenwood), and he reached out to them again to see if they could work together again. "I got back in touch and suggested we turf cut areas on their heathland sites to encourage more tiger beetle and sand lizards and, in return, we would be allowed to transplant all the heather we strip and transplant to the course. This has allowed us to renovate all our bunkers and add large swathes of heather areas to landscaped areas of our course creating amazing, instant visual impact."

As most course managers will testify, heather establishment/maintenance relies heavily on great woodland management. At Woking, heather was in decline due, in the main, to this issue. "With the number of oak and deciduous trees that have grown up over time, I quickly realised that one of my first projects needed to focus on their removal. To that end, we have already reduced the number by a few hundred trees to open areas which now allows sunlight and air movement through six holes. We are now looking at removing substantially more over the next two years to further improve our heathland environments which, in turn, will improve heather characteristics to the course which were historically lost over previous years."

Heather rejuvenation features heavily alongside Woking's bunker remodelling scheme. "When I first started at Woking, the greenside bunkers were not in keeping with our heathland characteristic fairway bunkers. Most of our greensides were just round circles so, as a club, we brought in architect Tim Lobb to help us over a four-year period to transform these back into proper heathland bunkering. We shape and carry out all the work in-house, adding heather transplanted from our Surry wildlife partner areas to give an instant impact."

With Tim Lobb onboard, the club used his skills to address the ever-present issue of making golf more accessible to more people, from beginners who want to get into golf and members who enjoy their game but, as they get older, can't keep up with longer holes and longer playing times.

"We wanted to retain our members and, having a high proportion of them in their later years, we felt it was needed to shorten the course to improve their enjoyment of the game and encourage new members into the game," Andy explained.

"Many clubs over the past decade have begun extending the length of their courses, but very few have appreciated the industry trends and begun shortened them. Personally, I feel it's needed to allow golf for all ages. Having carries of heather up to 120 yards to the fairway, it's become so difficult for juniors or any new golfers to learn how to play as the course has become unplayable."

The club took the bold and inspirational move to construct new shorter length blue tees, and instructed Tim to draft up a four-year plan which will give all members the chance to enjoy the course with only carries of up to sixty yards. So far, Andy and his team have completed eight new blue tees in conjunction with a new visually pleasing path network. The members are delighted so far with the results, helping many members achieve personal best scores 'to par' (2 hours 28 minutes)! 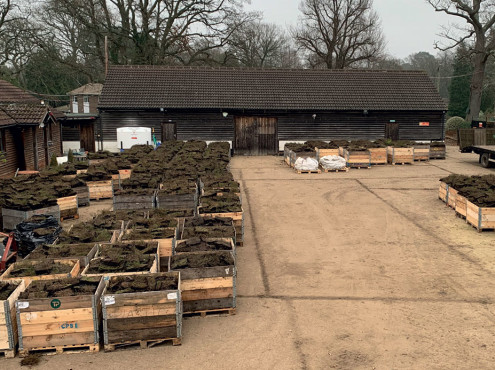 Andy has also overseen a new comprehensive Rain Bird irrigation system. Incorporating greens, tees, aprons and fairways. Having overseen the instillation of a completely new Toro system at The Buckinghamshire, Andy was best placed to project manage the new instillation at Woking. "The membership we have here at the club are very special, this was highlighted to me when the members were asked for donations or interest free loan notes to help pay for the system. Within five months, we had the required amount which allowed us to push on and start installing the new system that same year, which has transformed the surfaces."

When talking to Andy, one of the things that impressed me the most was his dedication to data gathering. Andy has this down to a fine art! Personally, I've had to learn the hard way that, without data, it is far harder to achieve what you are trying to achieve, even more difficult to convince directors/members that your plans are the way forward.

Andy explained to me; "I've always understood the importance of collecting data and have improved my data gathering year on year. Making sure that it's relevant to what we are trying to achieve and understanding in our daily programmes is vital. The team take it in turns to collect the data from three greens on the course during morning set up. This data only takes fie minutes to collect, so doesn't impact on our man-hours. The data gives us all the readings we need to improve performance such as spraying programmes, aeration, topdressing, moisture and speed levels."

Andy believes in the use of his 'Pogo' to collect and add other valuable data like clip yield. "We also have SPIIO soil sensors in some greens to allow us to measure moisture, temperature and salinity levels throughout the day, which helps decision making on irrigation inputs. These sensors are placed a couple of inches below the soil. We have annual meadow grass (poa) greens and I need the readings to be relevant to the root system we have. All this data comes back to my phone and computer system which I then input onto my own data spread sheet. To have all this data available on my phone daily gives myself and the team extra support and helps in decision making if I'm away and anyone is unsure on what to do."

Personally, I'd just like to conclude how impressed I was with Andy and his team's dedication and professionalism. They are truly a credit to our industry, and it was a real privilege to visit them and get an insight into what professional greenkeeping teams can achieve.