1 Ringing in the new at Farleigh Golf Club

New course manager at Farleigh GC is Kenny MacPhail, who took over the reins at the 27-hole North Surrey club in November. Deputy Course Manager for the last 18 months he has been instrumental in another new start at the club, a Wiedenmann Super 600 three- in- one collector which has just been installed. 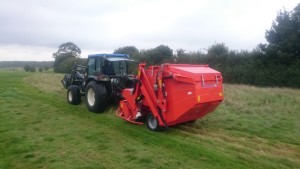 "Versatility and huge capacity in equal measure made it an obvious choice," said Kenny MacPhail. "Farleigh is a 350 acre site with between 50-60 hectares of very heavy rough. Ours is a downland golf course with few trees on the course so we need the rough to act as a defence but it is very thick at the base making it far too penal for the golfers. We tested a several makes and models of cut and collect machines but nothing else really came close to dealing with it. The Weidenmann Super 600 is the biggest and most robust out there and I'm very happy with it."

Wiedenmann's Super 600 with its vast 4500 litre tank combines as a flail mower, scarifier and collector to legitimately earn the title 'Super'. Easily this one machine can do the work of several smaller machines. It has three operating functions - head unit lift and lower, hopper lift and hopper tip and in any of these modes it produces a high airflow which ensures that the collected material is suitably compressed. For such a big machine the Super 600 It is extremely manoeuvrable with a light footprint. The container lifts via a parallel system, with the hopper rotating - allowing the hopper to completely discharge collected material. Working depth or height of cut is easily and quickly adjusted. 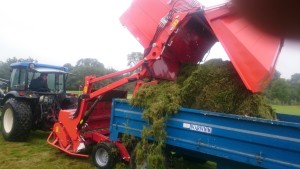 "It compacts material very well. We can get two big loads into our trailer. Right now it's out eight hours a day every day as we are presently clearing a ten hectare section. It won't be long now before we change to the scarifying blades and scarify a few specific areas before returning to again in the spring," continued Kenny MacPhail.

On hand throughout the sales process was Tom Bailey, grounds care specialist from Wiedenmann dealer, Ernest Doe at Esher. "The team at Esher has been supporting sales and service at Farleigh for the last five years and the Super 600 was always going to be the machine for purpose," said Tom Bailey.