With groundwork well underway for this years summer of football in Russia, over 80 pitches (including stadia and training facilities) are in the final stages of preparation. Contrary to previous events, the chief groundsman and sub-contractors at each facility are responsible for their own maintenance programmes, with most turning to Rink Topdressers to perfect their playing surfaces. 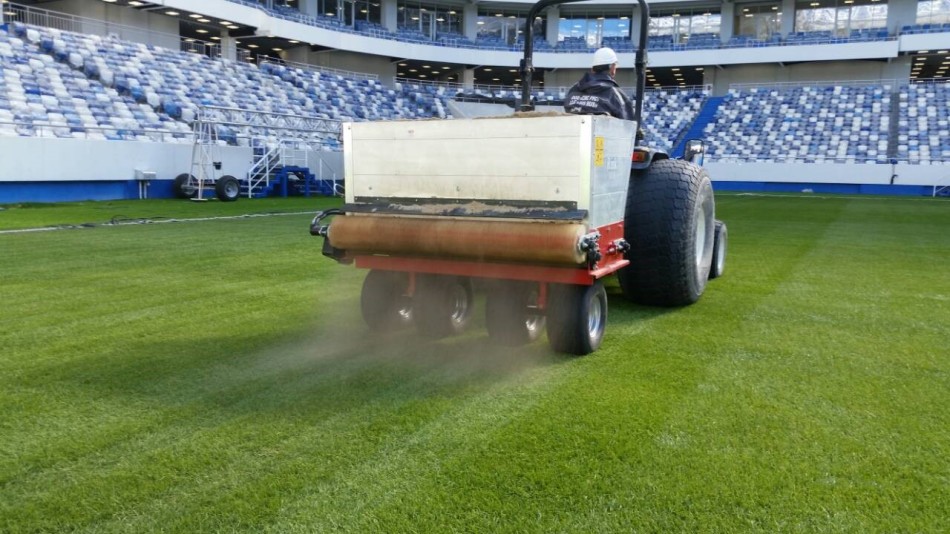 Head Groundsman Vitaly Belonenko at Kaliningrad Stadium has regularly been using the ultra-light and accurate Rink 1010. The stadium, which was built specifically for the Russia 2018 World Cup, is based on the design and concept of the Allianz Arena in Munich and, amongst other matches, is due to stage a crucial group game between England and Belgium.

The Rink 1010 offers a spreading width of up to 1.5m, at a thickness of up to 10mm. the combination of its light weight build and floatation tyres mean ground pressure is minimised. Regular topdressings are taking place at the stadium to firm up the surface, including 10 tonnes spread the week before the inauguration of the stadium in April. It is being used in combination with a Redexim Verti-Drain 7215 aerator to work the sand down deeper into the soil profile.