by Steve Mitchell
in Industry News, People, and Machinery & Mechanics
on 23 Jan 2017 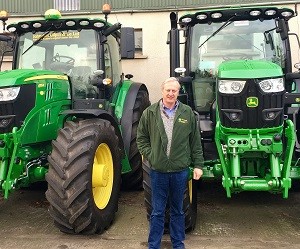 For the past forty years Lisburn man Robbie Hewitt has thoroughly enjoyed a passionate career working on and selling John Deere tractors and machinery but has now decided to call it a day.

Robbie, 63, has just retired as sales director with Johnston Gilpin & Co Ltd, the John Deere dealership based on the Lisnoe Road outside Lisburn.

His career has been an enjoyable one, but Robbie has witnessed many changes over his four decades in the business, with technology being the major player.

"I started off with Johnston Gilpin & Co way back on January 1, 1976 as a mechanic under the watchful eye of Donn McConnell who was the managing director at that time," said Robbie. "I had previously spent seven years working with Stevenson Brothers as a mechanic straight after leaving school.

"I worked as a mechanic, and subsequently foreman mechanic, in Gilpins until 1985 when I moved into sales and I stayed in that department until Christmas just past when I retired.

"Around eight years ago I was made sales director and worked closely with Donn's son Randal, the current managing director.

"During my forty years, I gained many loyal customers who continued to purchase machinery off me right down through their family generations," continued Robbie.

"Sales experience is gained and based on good relationships with customers and that's what helped me over the four decades."

"During the past five years I have noticed the most changes in tractors and machinery with technology coming on leaps and bounds."

"With GPS, telematics and emission controls technology has increased dramatically from the simple tractors in the 80s," he said.

Robbie is very passionate about John Deere and understandably feels it strange not to be going into the dealership on a daily basis.

"People keep asking me what I am going to do now in my retirement," said Robbie. "My simple response to them is that I have never retired before so I am not too sure what I will do," he laughed.