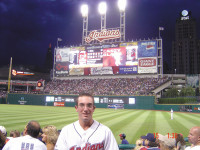 Rob Jones is part of the Ohio State University's programme for young greenkeepers. In part IV of his diary he talks about preparing the course for its big tournament of the year and visiting the biggest rollercoaster in the world, with the boss's wife!

Since I last wrote there have been a lot of things going on at the golf course. I have been getting a bit more responsibility from the staff here and they have become more friendly as we have got to know each other. I would say most Americans are warm and welcoming and, if you make time for them, they will make time for you and help you along.

On a personal note, I had some big news from back in England. My parents phoned to say they fancied moving to Spain to live and work but I had to be okay with it before the started the ball rolling! It came straight out of the blue. I have to say it took me a week or two to get my head around it but I don't mind them moving. It's great for them as they want to do it and I am sure there are more golf courses out there, certainly more than on the Wirral.

The hardest part for me will be leaving all the happy memories I have of growing up in the house, the neighbours and my leaving party. This will only be memories now as I will not get back to see the house again. The last time I saw the house it was dark and I was leaving to go to the airport to come out here. It's been hard getting used to this and it can preoccupy your mind when it should be on the job.

If you find yourself with any problems always talk to your hosts, at least then they will have an understanding of what you are going through. Don't keep it bottled up inside. I have accepted my parents move now and am quite excited about going over there to visit. Who knows, I may get a job out there. Moving over here and working with warm season grasses is certainly starting to make this move even more sensible now!

The Double Eagle Golf Club has suffered a major drought this year. It is the first time in its history that this has happened. The state of Ohio normally gets four inches (100mm) of rain each month of the summer, but the only month we got anywhere near that this year was in August. So, with the water table being very low we have not been able to water the greens as much as we would have liked. Normally, we would double cut and roll the greens but, if we had done that we might have killed them off. The only time we have double cut and rolled this year has been just before competitions when the greens have needed to be fast.

The fairways have not been cut as much either. We have limited the cut to once a week and have spent many hours hand watering the fairways and greens as required - sometimes all day! The course has been under so much heat stress. Being exposed to such heat and watching how the staff handle it, has been great training for me.

I believe I have got a better knowledge of course management now. For example, when we spray any form of chemical or fertiliser we try and spray once a week. This doesn't mean we are spraying more. All we do to spray once a week is divide the recommended monthly usage by four to get our weekly amount. We spray the greens with a Wilka Walker.

This is a sprayer attached to a 300 gallon tank and will spray all the greens. We spray greens at 26psi and we walk at 2 mph/3.2kph. We have a tractor mounted sprayer for the fairways. The tank has the same capacity as the Wilka so we have to refill it a few times to spray all the fairways. We use a Toro sprayer with a 100 gallon tank on the approaches and, again, we have to keep refilling it to complete the task.

I have never worked with so many staff before just for eighteen holes. It has shown me how much better you can condition your course when you have so many people working on it. I have gained so much experience from working with a large team. It has helped my man-management skills as I am always having to work as part of a team and pull in the same direction to get everything done. Planning, timing, coordination, organisational skills, you name it, all are tested with a big crew, which is great.

We have just worked on preparing the course for our biggest tournament of the year, the Big Red Round Up. Big Red is the company which owns the golf course and the local Columbus Blue Jackets ice hockey team. The company name comes from owner's ( John H McConnell) nickname. He gets all the club members to play and also a few professionals to play alongside them.

It was very long hours for the greenkeeping staff. We worked at least ten hours a day and, sometimes, twelve. It was great to work on though as you could see the course improving on a daily basis.

The tournament started at noon so we had time to get all our work completed before the competition started. I have never seen so many golfers on the course in one day. But it was great to be able to go out and watch famous people like Chi Chi Rodriguez play our course and enjoy our efforts.

A few days after this competition we had the Columbus Blue Jackets day. This is where all the ice hockey players come 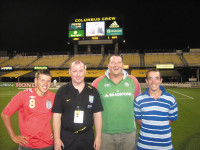 and pay with a few members, and it is all for charity. This was a nice competition because it was all set up different. Some of the guys got the chance to be caddies but, unfortunately for me, I was not able to caddie as I was flying to New York to meet my parents on the same day.

A few weeks ago Aston Villa FC came over to play the Columbus Crew and I was lucky enough to get to see the game. It was good to see some English football again! Head Groundsman at Villa Park, Jon Calderwood, travelled over with the team as a guest of The Ohio State University Sports Turf Department.

Jon was a former student of Pam Sherratt's at Myerscough College. OSU's Mike O'Keeffe arranged for all the interns to meet with Jon on the pitch after the game. He was very friendly and more than willing to pass on information about his pitch and aspects of the industry which I found very informative.

Sharing ideas, problems and solutions is so great in this profession and that is why I like it so much. Ohio State University is great at putting all of these people together. That is why this intern programme has meant so much to me. I now understand why they run this programme. It is more than just training students or a work placement. It is about preparing them for life, connecting them with high profile people, not just in America but around the world.

I also went to the Ohio Turfgrass Foundation research field day. www.ohioturfgrass.org. This was a huge open day held at the University Research Farm. Many people from the golf course, sportsturf and lawncare sectors attend to see the various tests they carry out on grasses for different types of sports from golf to stadiums. It was useful to see how different grasses grows in different condition and how to treat diseases. This can be useful as it may save time doing trials yourself as, maybe, they will be doing a test that would work for you. And, because they are carried out by the university, they are independent from the big chemical companies, so the tests are true and accurate.

I have also been a busy enjoying myself outside of work. I went up to Cleveland, which is a very nice city on the banks of Lake Erie. It is famous for the Rock 'n' Roll Hall of Fame and for its huge number of bridges spanning the Cuyahoga River - twenty-two at the last count. There are loads of different types, some interesting and some not so interesting, but fascinating to see. I went with my boss, Course Superintendent Todd Voss, who knows Cleveland very well and was able to point out places of interest. We were also lucky to get tickets to a Major League baseball game between the Cleveland Indians and the Chicago White Sox. Cleveland lost the game 5-4. The ground was very impressive and the atmosphere inside was electric - totally different from what I was expecting.
I also went to see the local baseball team, the Columbus Clippers. This is a lower league baseball team and they are a feeder team to the New York Yankees. This was a much more relaxed and chilled atmosphere, completely different to the Indians game.

I also managed to get up to the biggest rollercoaster theme park (I think!) in the world. It is called Cedar Point. This was an amazing day out. I went with my two house mates Will Laws and Jim McCague and also Heidi, who is Todd's wife. Heidi loves roller coasters and was off work that day. We all had a good day out and got on as many rides as we could. It was thoroughly enjoyable and I can see why all the lads on the staff were telling us we had to experience it.
As you can see, we work hard but we also get out and have fun which, I believe, has been a very nice balance.

I know we are lucky when the boss's wife comes with us! I think it shows that they care about us and they involve us in their lives.

I am getting close to the end of my time here at Double Eagle and I have enjoyed every minute of working on the golf course. Maybe one day I might try and come back and work here (if they want me back). I reckon this course ranks with the top golf courses I have worked on in my short time in this industry.

If there are any comments or questions you would like to make about the articles. please email me at robjones_69@hotmail.com and I'll do my best to help you. It would be nice to hear from you anyway just to get some feedback. Cheers for now. Rob Jones