The Mobile Rocket Stadium (aka Belle Vue) is the home of Super League rugby league club Wakefield Trinity. One of the original twenty-two clubs that formed the Northern Rugby Football Union in 1895, they get their name from the Holy Trinity Church. Lee Williams met with Head Groundsman Steve Dutton to learn more about his role and his expectations for the future. 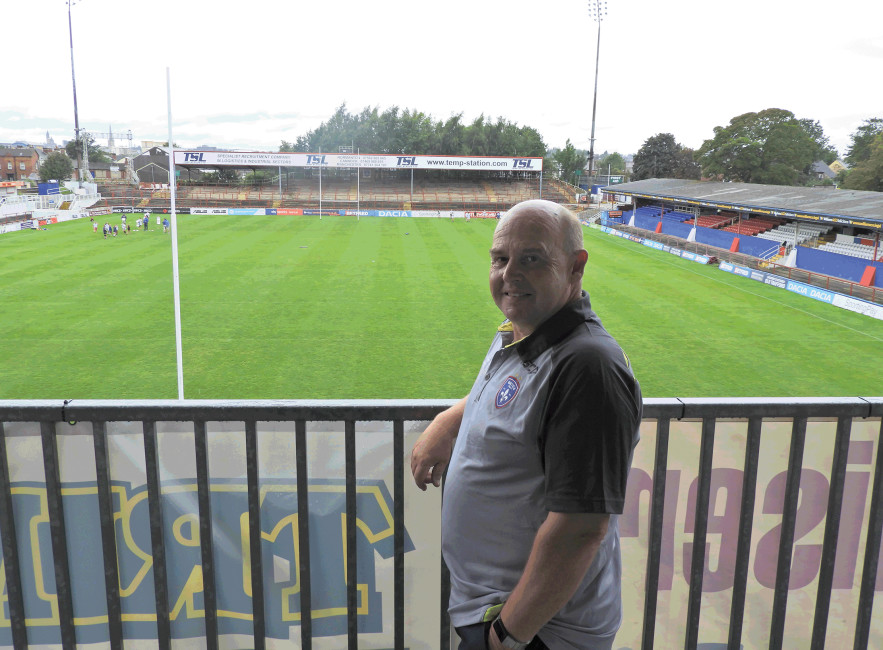 Steve Dutton, Head Groundsman and Kitman, has served Wakefield Trinity for the last thirty-four years, through thick and thin. He started his working career as a joiner but suffered a back injury whilst in the trade, which put an end to that career path early on.

He had to find work and started working at the club part-time back in 1985. His first job at the club was cleaning out the dressing rooms when the council owned the ground. When the ground was taken over by new owners, Steve found himself thrown in at the deep end. "I came in one day and was told 'you are now the head groundsman'. The conversation went like this: 'all I know about grass is it grows faster in the summer than it does in the winter'. Their response was: 'well, that is good enough for us'. Since then, I have gained my NVQ Level 2 in Sports Turf to help improve my knowledge and I have been lucky enough to lean on various other experienced groundsmen around this area for advice."

Steve took on the full-time role of head groundman in the early 1990s, learning as he went along. Since then, he has become more than just the groundsman. "My main responsibility is still the preparation of the stadium pitch for training and games, but I'm also the club's kitman responsible for setting up the kit for home and away matches, plus washing it after the match and hanging it back up in the changing room."

Steve has no help on matchdays and, with so much work to do, I am keen to understand what a typical home game involves and what time he starts and finishes. 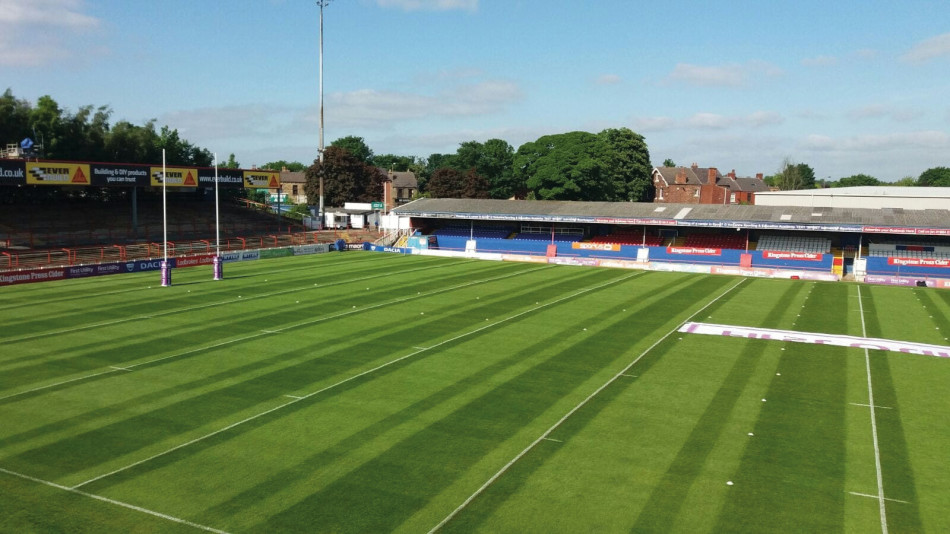 "If we have a home game on a Sunday, I will prepare the pitch on Saturday, which involves cutting with the Dennis G860 one way and then mark out. Then, on Sunday, I will get in for 9.00am and set the kit out in the dressing room for the players. After this, I will put the pads out on the rugby posts and have a walk over the pitch just to check all is okay. After the game, I will gather up the kit ready for washing the next day and then go home - usually quite late!"

"The stadium pitch is predominantly a basic soil construction with sand that has been incorporated over the years during the renovations. There is no undersoil heating, no drainage system and a very limited irrigation system."

"We have one freestanding Toro TS90 sprinkler and a pump; that's it. The tank holds 8500 litres. I can water one half the pitch one day then it takes twelve hours for the tank to fill back up, so I can water the other side of the pitch the next day. It's not ideal, especially with the prolonged summer last year, but it is something I have to cope with and do my best with what we have."

The pitch is well used, and Steve does well with such limited resources and little time in between matches to perform maintenance tasks, to keep the pitch going through the season. 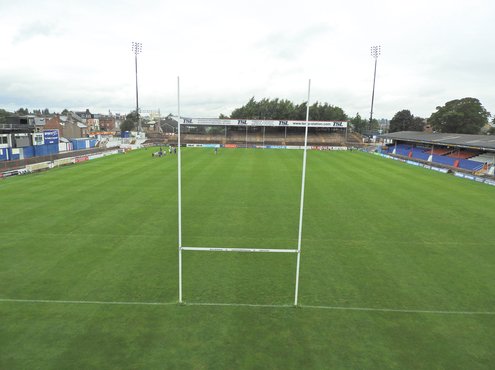 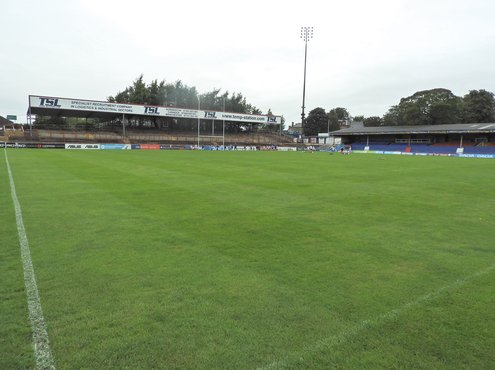 "The pitch was recently used for twelve consecutive days in the hot spell we experienced. Our first team are here four times a week training, plus their Super League matches. Then we have the reserves, under-19s, scholarship and the ladies team all playing their home games here."

Whilst I was with Steve, the pitch was being used by the Wakefield Trinity Community Trust for their summer camp, adding more wear to the pitch and even less time for Steve to prepare for a game he had coming up that night; and that isn't the end of it!

"Whilst the season is still on, we host the amateur finals and the BARLA national cup finals where they play six games on the pitch at the beginning of January."

I would expect, with this amount of play on the pitch, Steve must have a substantial renovation programme in place and be given enough time to help nurse the pitch back; unfortunately, this is not the case.

"This year, we just verti-drained and seeded; that was it, as we only had a two-week period for the pitch to recover, but that turned out to be just two days when the first team were back training on it again! In the past, we have scarified, verti-drained, applied 100 tonnes of sand and overseeded, but that level of work has got a little bit out of reach in the last few years." 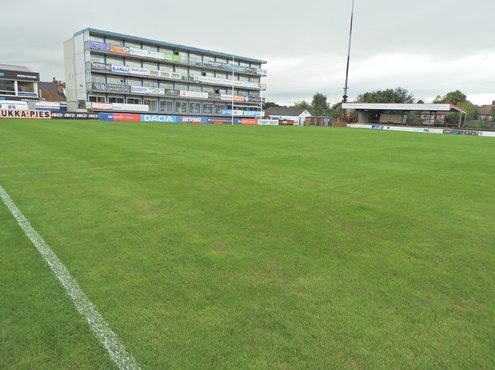 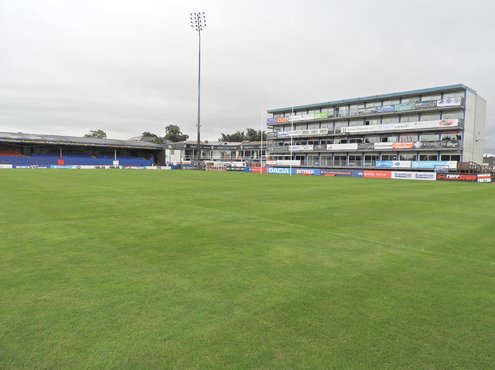 Steve's maintenance regime is very basic, but you can understand that when you see what he must work with and around; it can't be easy.

"I cut the pitch with the Dennis G860, with the box on, at a height of 32mm, which I keep the same all year round. I like to cut as often as I can to help tidy up the pitch after use as I don't have any rotaries or a brush cassette for the G860 to pick up any debris. When I get the chance, I will go around the pitch and take the bigger divots out with a fork. If I'm lucky, we will have a contractor come in and verti-drain the pitch twice a year, once at either end of the season. I do have a SISIS Multitiner which I try and get on as much as possible, but it is currently in a state of disrepair with half the tines lying flat. I will go around the perimeter once a week with a little rotary to tidy up next to the boards."

Steve's fertiliser programme is minimal. He will get soil samples taken at the start of the season - if he can get it done for free - but tells me that, with a limited budget, he is not able to keep to any set regime.

"To be honest, it's a matter of when it needs a feed I just get a granular fertiliser down, and any weedkiller for the perimeters I will get from the local garden centre. The club has recently done a deal with one of the corporate box owners who has a company that makes organic fertiliser, so that should help keep the pitch going."

Steve is hopeful there could be light at the end of the tunnel, with the club looking to invest in a new a hybrid pitch for next season. This would hopefully mean some investment in a better fertiliser budget and new machinery. 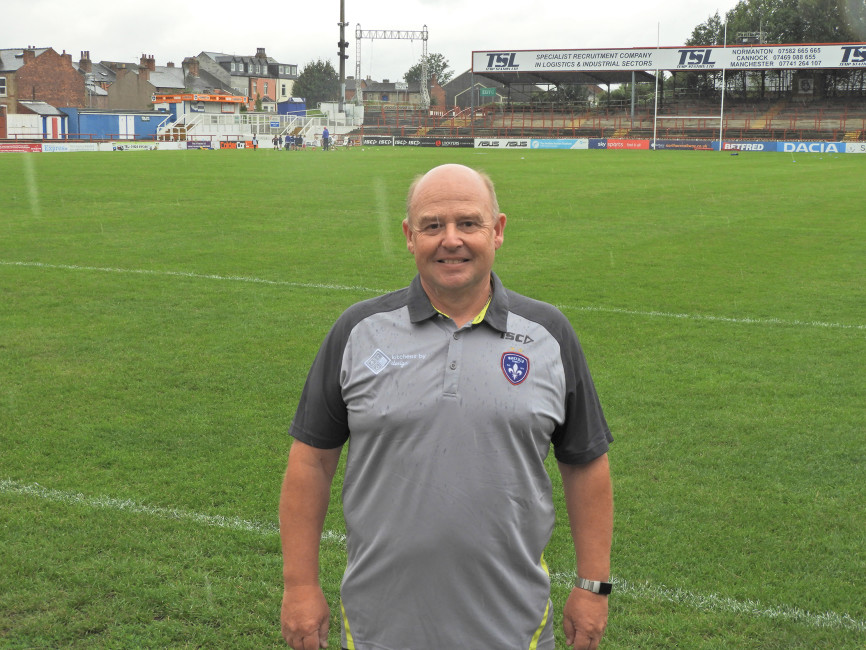 "We are currently looking at the Hero and Eclipse hybrid pitches. The club is hopeful of getting around forty-five hours of use a week out of it without any grass loss. I'm not sure I agree that is possible. The decision is down to the club; I can only advise, but my choice would be to invest in a Desso or SIS Pitch, but this is out of our reach. I have been over to Doncaster Knights, to meet Lee Blagden who has given me some advice on how much usage we can expect and how much it costs to run a year. Depending on what budget we have left, I would like for us to invest in some new machinery, as our current machinery is just not suitable to maintain a new hybrid pitch.

I suggest to Steve that, if the club is not investing in the current pitch with all the usage it gets, are they aware of the extra costs that will be incurred to look after a hybrid pitch and the investment needed in new machinery?

"I believe it will cost around £40,000 a year to run. The club is aware of this and plans to hire the pitch out where possible to recoup some of the costs. With our current usage, and only myself looking after the pitch on a daily basis, I think we have to have a real hard look at how we would realistically manage a hybrid pitch and what actual usage we would get before losing grass cover."

When Steve isn't working home games at the club, he enjoys going down to Wembley where he is a member of the matchday team. "I have been part of the team for the last ten years; I will do whatever events I can. I have worked the Challenge Cup Finals, NFL, FA Cup, England games, and I've even been down after the Anthony Joshua fights to help pick up the covers. I really enjoy it; I get to see what many other people don't get to see. It's good to pick up tips, ideas and learn new skills. The experience I now have from working at Wembley will stand me in good stead if we invest in a hybrid pitch ourselves." 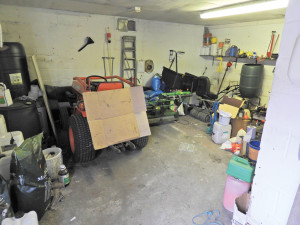 Wakefield Trinity is a professional rugby league club in Wakefield, West Yorkshire, that play in the Super League. One of the original twenty-two clubs that formed the Northern Rugby Football Union in 1895, between 1999 and 2016 the club was known as Wakefield Trinity Wildcats.

The club has played at Belle Vue Stadium in Wakefield since 1895 and has rivalries with Castleford Tigers and Featherstone Rovers. Wakefield has won two premierships in their history when they went back to back in 1967 and 1968. As of 2019, it has been fifty-one years since Wakefield last won the league.

Wakefield Trinity originally played on Heath Common. In 1875/76 they moved to a ground near the Borough Market (near the current Trinity shopping centre.) They returned to the Belle Vue area of Wakefield and played on a ground behind the Alexandra Hotel near Elm Street. This is on the opposite side of the road from the present ground.

The ground is primarily used for rugby. It was originally a rugby union venue before the schism of 1895, although the occasional rugby union has been played on the ground after 1895. For example, in January 1899, it hosted the Yorkshire versus Australia game.

The 1937-38 Rugby Football League Championship Final was due to have taken place at Belle Vue, but as both finalists Hunslet and Leeds were from Leeds, the authorities switched the match to Elland Road.

On Saturday 16 September 2006, the stadium played host to the 'Battle of Belle Vue' when 11,000 fans from Wakefield Trinity and Castleford watched the match which would decide who was relegated from Super League. Wakefield Trinity won the match 29-17 sending their nearest rivals Castleford down to the National League.