by External source
in Industry News
on 19 Mar 2015 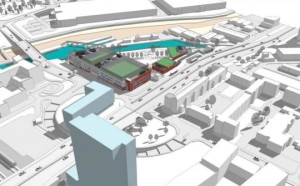 The Bow School in East London has moved to a brand new facility at Bow Lock.

The new school consists of three buildings. The main block is a 4 storey teaching and sports building with a separate single storey dining pavilion and two storey assembly hall.

External sports facilities are sited on the roof with 3 MUGA courts accessed from within the building, and fully enclosed in netting, this is due to the air quality at ground level from the A12 dual carriageway adjacent to the site.

CLD worked closely with the main contractor and installer as the task was very demanding due to increased wind loadings and the need for the pitch to be totally enclosed. The pitch being located on top floor provided its own challenges with safety, security and wind loadings.

The solution came from a collaborative approach with a CLD approved contractor, a very professional fencing contractor and specialist fabricator based in Northampton. This approach worked extremely well as this provided the vital link between the main contractor and manufacturer. The Dulok mesh fencing system was used for the side walls with ballstop netting for the roof. The large covered roof spans are over 34m wide. Large supporting beams were fabricated to support the whole structure of the MUGA pitch. 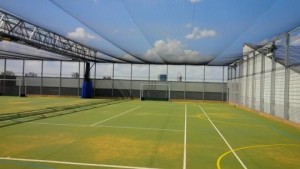 Detailed site surveys were conducted over a number of weeks to determine how the perimeter mesh walls were going to be fitted and what would be needed to withstand the pressures of wind and snow etc… Structural calculations were carefully produced to ensure every detail was covered as one small detail missed could prove very challenging at a later stage.

The first stage was to produce some specially engineered brackets to support the perimeter fencing and to withstand the strain of the line wire for the netting. These brackets had to be precise ready to accept the posts which were craned from ground level to the rooftop MUGA pitch. Specially fabricated trusses were produced the take the extra strains and loadings associated with the project.

The outcome was excellent and the finished result was very effective and the school achieved its mission. The winning formula was simple - Collaboration was the key in the whole of this project, from early contact with the architect to final competition - a complete winner.