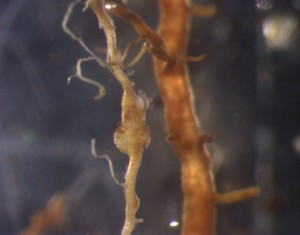 Recent findings of the regulated root-knot nematode, Meloidogyne fallax, in sports turf at several locations in England have prompted the production of a new guide on symptoms, biosecurity and control for ground managers and turf producers.

Meloidogyne fallax (M. fallax) is a non-native, notifiable root-knot nematode that invades the roots of host plants. It has a wide host range, and can cause considerable economic damage to potato, carrot, leek and black salsify crops, in addition to sports turf. It was described from the Netherlands in 1996 and has since been reported from South Africa, Australia, New Zealand, Chile and several European countries, including Germany, Belgium, France and Switzerland.

Due to its potential to cause significant economic impact to host crops, it is essential that the risk of its introduction and spread in the UK, particularly to agricultural land, is minimised. One potential pathway to agricultural land is thought to be the disposal of turf and soil/rootzone mix when pitches are being relaid.

In the UK, M. fallax has been found in sports turf on several occasions since the first report in 2008. Since 2015, there have been three official findings on sports turf at separate locations in England and there is a risk that it could be more widespread and/or introduced to further sites in the future.

Root feeding by M. fallax and subsequent gall formation can cause stunting, lack of vigour and yellowing of turf, reducing the quality of pitches, fields and golf courses. However, these symptoms can also be caused by another non-native, notifiable nematode, Meloidogyne chitwoodi, as well as by other species of nematode already present in the UK, including Meloidogyne minor, M. naasi, M. kralli and free-living nematodes such as Helicotylenchus pseudorobustus. Therefore, it is important to sample soil regularly and obtain an accurate diagnosis.

Regular soil sampling will help to detect any nematode problems at an early stage and is strongly advised when symptoms of nematode damage are seen. A representative sample should ideally cover 500g per ha and should follow a systematic pattern using a soil corer to a depth of around 20cm. Samples should be taken from around the fringe of damaged areas, and, if possible, from an unaffected area for comparison.

Biosecurity can be defined as a series of measures that are designed to protect against the introduction and spread of new pests, and to effectively deal with them should they arrive.

Possible pathways for the introduction of nematodes into sports turf include the soil/sand/compost used to form the growing media, ready grown-turf, machinery or footwear. Grass seed is unlikely to be infested with Meloidogyne species and so is low risk.

The risk of introducing nematodes into turf can by reduced by ensuring that: 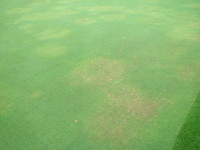 Chief Plant Health Officer for the UK, Nicola Spence, comments; "It makes good business sense to reduce the risk of introducing or spreading plant pests and diseases by applying simple biosecurity measures, such as cleaning equipment and machinery between sites and disposing of waste responsibly, to everyday turf management practice."

"Everyone has a role to play in managing the risks to our economy and our environment from plant pests and diseases."

The garlic based nematicide, Eagle Green Care, is currently the only authorised nematicide in the UK for amenity and sports turf, and has been shown to be effective at reducing numbers of nematodes in trials. Steam treatment may also be a promising option, with initial trials showing increased root growth and lower Meloidogyne populations.

Physical control by the removal of the turf and soil could be an option for limited areas. Most free-living, juvenile stages of M. fallax are found between 20cm and 40cm deep within soil, the depth relating to the root depth.

Other options include removing turf from infested areas, or treating with herbicides, and not growing grass or other host plants on it for at least two years - clearly not the method of choice for sports pitches.

Copies of the new guide can be found on the UK Plant Health Risk Register.

Some of the reasons for the increasing numbers of findings of sports turf damage associated with root-knot nematodes in the UK have been described by Colin Fleming, lead diagnostician at AFBI. These include:

One way of mitigating the impact of nematodes on turf is to improve the photosynthetic capacity, and therefore the vigour, of the turf.

This can be achieved by:

M. fallax is a notifiable pest. If it (or M. chitwoodi) is confirmed to be present following laboratory analysis or there is a strong suspicion that M. fallax is present, the finding(s) must be reported to the relevant authority (see below).

If M. fallax is confirmed as being present, waste disposal controls and biosecurity measures will be required under a statutory plant health notice.

All images ©Colin Fleming The Agri-Food and Biosciences Institute, UK