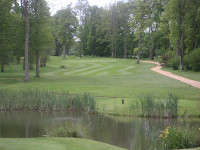 A Southern Course Manager is getting to grips with the unusual problem of turf refusing to root on greens built to USGA spec.

Simon Adby of Rusper Golf Course, an 18-hole private members club at Horsham on the Surrey/Sussex border says that the original 9 holes were built 18 years ago. "Just after I arrived in 2000 the present owner bought the course and decided to add a further 9 holes," he explains. "Although the greens were built perfectly with herringbone drainage, 35 mm reject stone, pea shingle on top and a sharp sand binding layer, I don't think the root zone was the quality he expected. It has a high silt content, which holds water when wet."

Vigorous aeration - verti-draining, sanding and hollow coring improved the drainage on four of the new greens, but three years ago the decision was made to re-build the remaining five to USGA spec. One year after the turf went down establishment into the root zone was so minimal that the turf could be rolled up again. 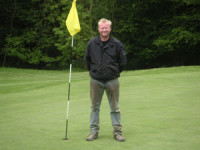 "The turf was fescue dominated and contained a lot of thatch," Simon maintains. "I don't think that the roots wanted to move out of the thatch. We turfed one of the tees at the same time and the same thing happened." The club decided to re-turf, three greens in 2004 and the remaining two, last year. This time the sward would be of higher quality and bent dominated. Lee Moffat of the Turf Care Group, Southern distributors for Floratine, joined Simon to help initiate rooting of the new turf on the five greens.

"As Rusper has it's own bore hole I decided to have the water analysed as well as the soil," he recalls. "The results from Analync showed both the soil and the water to have a high calcium and potassium content with magnesium through the roof. Sodium and Iron were also very high. This meant that the borehole water was contributing to the soil imbalance, but your water source is your water source and you can't just change it. We had to set about managing what we'd got."

Soil amendments Calphlex, a product designed to increase the availability of calcium (along with other nutrients), remove sodium and help lower the magnesium and iron content was applied along with Tri-Cal an immediate form of calcium. Maxiplex, which helps improve nutrient availability and the soil penetrant Pervade were used to flush out the excess elements.

The foliar feed, (which is still applied) includes two bio stimulants, Astron, applied throughout the year to promote rooting and Per 4 Max to give a spring start and push density. Carbon N, an NPK product and Protesyn, which provides vital amino acids are also included as part of a broad foliar programme. Simon, who has increased his aeration, either verti-draining, hollow tining, solid or star tining the greens once a month, changes the application rate as he sees fit. He also feeds twice to four times a year, (depending on how the turf is performing) with Gro-Power organic granules, which are high in humic acid and aid the build up of microbial activity on new sand greens.

Two years after the first greens were re-turfed both men can see a definite improvement. "The last soil samples taken at the end of the year showed lower iron and magnesium levels," Lee reports. "Slowly things are coming into balance."

Simon is encouraged by the general grass growth on the greens. "Last year we had a lot of rain but this winter was relatively dry and we've managed to get 100% cover," he maintains. "Root growth is between three to four inches and these greens are performing as well as the originals"

For further information on Floratine contact David Snowden on Tel:01765 658021