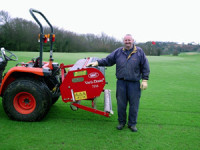 Royal Cromer is a club with tradition. It was granted its Royal patronage by HRH Edward Prince of Wales on Christmas Day 1887, with the formal opening held on 2 January 1888. Few players today would disagree with the club's description of itself as "a tidy, caringly kept golf course and a model of what good greenkeeping should be."

Head Greenkeeper, Roger Plummer, used to call in contractors for specialist seasonal turf rejuvenation tasks. But 12 months ago, he decided to purchase a unit that would enable the Club to do such work in-house. He considered several on the market, and found the Verti-Drain 7316 to be the best for his needs in terms of performance and build quality.

The 7316, obtained through local Charterhouse dealer, Ben Burgess of Norwich, met Roger Plummer's essential requirements of having the power to penetrate to depths of 12in (30cm), yet being small enough to be used with the Club's existing compact tractor. Surprisingly perhaps, the 7316 requires a tractor of only 27hp. Its 63in (1.6m) working width makes it ideally suited to working on greens, tees and fairways. At faster tractor speeds, it can aerate up to 38,400ft2 (4200m2) per hour.

The machine has a three-speed gearbox enabling it to be matched exactly to achieve the desired hole spacing. This also does away with the need for a creeper box. Solid and hollow tines can be fitted.

All Verti-Drains in the comprehensive line-up offered by Charterhouse are designed to create a 'heave' effect as the tines leave the ground, breaking up compacted soil and improving drainage on heavily used turf. The action is like pulling back on a garden fork, but on a much larger scale.

Roger Plummer describes his 7316 as "a brilliant machine which we use on the greens, tees and fairways to maintain the high standard of the turf. It does exactly what we need, reaching down to 12in, and we haven't had to buy another tractor to power it. Another plus-point is that the Verti-Drain has no grease points, which reduces the risk of contaminating the turf."

The 7316 is ideal for clubs like Royal Cromer that need a compact yet high work-rate aerator to achieve best value. The other models in the Verti-Drain line-up offer solutions for all other professional users such as a newly launched, rugged version, the mighty 7626 Contractor. This can reach depths of 16in (400mm) and is targeted at professionals seeking the highest work-rate.