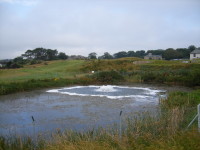 The pond on the Struie Course's 18th hole - known as Witches Pool - holds one million gallons of water used to irrigate the greens, tees, fairways and walkways. However, the still waters from this bore hole used to stagnate in the summer, making the pond prone to algae and unpleasant odours.

In late spring, the Otterbine team installed a demonstration unit to show the benefits aeration would bring. Two months later, Eoin invested in a three-horsepower High Volume surface-spray aerator, so impressed was he by the results.

"The pond regularly became stagnant in the hot weather due to the lack of moving water and oxygen," Eoin recalls. "But the Otterbine demo unit - which we replaced a couple of months later with our own aerator - has worked wonders. The pond has been cleaned up no end and the water's clear. You can see and smell the difference!"

Eoin now plans to make further improvements to Witches Pool by cleaning the pond out this winter so that its healthy appearance - and the Otterbine's performance - is even better next season. As he concludes: "It's great to see the 18th hole looking and smelling so good. Our members like seeing the unit bubbling away and the improved water quality is a draw for the wildlife - we've has ducks with ducklings on the pond this year. By cleaning up the pond we expect even better results next year."

For more information on Otterbine's range of aerators and aerating fountains, and how they can help improve water quality, contact distributor Lely UK on 01480 226848 or email otterbine.uk@lely.com to request a free leaflet on the benefits of aeration, 'It's Never Too Late To Aerate'. Alternatively, visit www.otterbine.com.