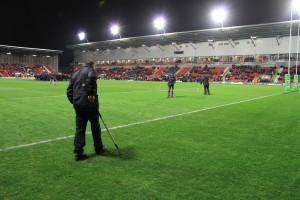 The final which kicks off at 2.30pm and is live on BBC One and BBC Radio Five Live, features the holders New Zealand and pre-tournament favourites Australia.

As a sell-out fixture, the Rugby League World Cup final will become the best attended international Rugby League match of all time, and both New Zealand and Australia will play in front of their biggest ever crowds.

The 14-team World Cup tournament has seen 28 international matches played across England, Wales, Ireland and France. I was personally lucky to have attended one of the pool matches at Leigh Sports Village where Tonga managed to beat the Cook Islands 22 -16 in a thrilling game, in front of a crowd of 11,000 plus spectators. 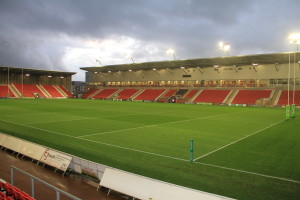 I had the opportunity to call in at Leigh Sports Village to meet up with Keith Porter, Head Groundsman and his staff, who were carrying out the final pitch preparations for the match.

I arrived at the ground at around 3pm to find Keith having meetings with the event organisers, discussing the format for the pre-match entertainment, with lots of activity on the pitch prior to the match in terms of flag bearers, dancers, parades and small sided games, plus the 30 minute team warm-ups.

The pitch looked immaculate, especially when you consider Keith has had over 30 rugby league matches, and 30 plus training sessions since April when the pitch was renovated (scarified and reseeded). Keith did, however, manage to conduct another renovation in September, again a light scarification and overseed.

The weather leading up to the match had been poor, overcast with rain showers, and it was a case of working with the weather, mowing and preparing the pitch in between heavy showers. Now with the pitch completed (mowed and marked), all that was left to do was monitor the pre-match entertainment practices.

This involved members of the Armed services marching with the National flags of the teams taking part, along with many of the dancers practising their own routines.

With less than an hour and half to go before kick off, the last remaing jobs were to secure the walkways and remove any machinery/trailers to a compound outside the stadium.

Once the team warm-ups had been completed, Keith and his staff made one final inspection of the pitch, put a few divots back and then made their way back to their seats to watch a very enjoyable match.