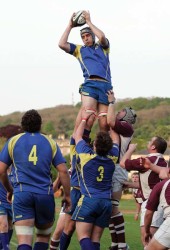 Having spent the past 35 years playing and coaching rugby, and maintaining the pitches, Pitchcare's Laurence Gale MSc, offers his views on the current state of playing surfaces

The aim of this article is to make clubs aware of what resources it takes to maintain pitches properly. It still amazes me to find so many clubs at all levels struggling to maintain their pitch facilities, the main reason being lack of equipment and funds.

What attracts a player to a club?

Usually it is due to the league status of the club, its coaching resources and, equally as important, the standard of the facilities on offer; the pitch, training ground and, of course, the clubhouse.

However, like many other sports today, rugby clubs are facing a tough challenge to retain playing members. In my day, players tended to stay at the same club for many years. Most clubs were able to put out four or more junior level teams regularly.

The clubhouse would be heaving with players and members and, subsequently, the clubs would be earning good profits from bar sales. Even on mid-week training nights it would not be unusual to have a full clubhouse.

Today, it is a different story. Many clubs struggle to get a second team out let alone a third or a fourth team, not just adults but the junior section as well. This decline in membership has a knock on effect to the income generated by the club.

Allied to this, the costs of running a rugby club have soared. At one time, clubs were run by volunteers, giving their time free, running the bar or coaching the players. Since the formation of the leagues, and the game turning professional, many clubs now pay players and coaches.

A key factor in retaining these players and coaches is the condition of the pitch; they will soon move on if the playing surface does not meet their expectations. Too often, today, I see many poor pitches which are compacted, under fed, weed infested and poorly presented when it comes to mowing and marking out.

This is generally as a result of inappropriate and inadequate maintenance, machinery and renovation work, compounded, in a lot of cases, by untrained groundstaff. 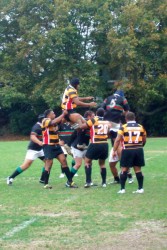 These issues need addressing. Initially, we need to educate clubs about the level of maintenance that is required for their facility.
No two pitches are the same! They may be soil based, sand based, intensely drained and, at the highest level, reinforced (Desso and FibreSand).

However, the majority of club pitches in the UK tend to be soil based and, often, without a drainage system installed. But, the basic principles of maintaining a natural grass pitch remain the same.

Grass needs regular mowing, feeding, brushing and aerating throughout the growing season and renovating (scarifying, decompacting, overseeding and topdressing) at the end of the playing season.

It is my view that the minimum maintenance regime for any soil based rugby pitch should involve the following operations:

They should be mown weekly and fed regularly based on a soil analysis. Generally, this would see an application of prescribed spring, summer and autumn feeds. Brushing and aeration operations should be undertaken on a monthly basis.

Weeds should be controlled using a selective herbicide and, in some instances, a programme of wetting agents/growth regulators can be used to help improve the condition of the turf.

Twice a year the pitch should receive deeper aeration, penetrating down to at least 200mm using either the reciprocating tine or linear aerator.

The minimum end of season renovation work should be a programme that cleans up the surface vegetation, repairs worn areas and provides sufficient quantities of materials to topdress, overseed and fertilise the whole playing area.

However, the success will depend on someone having the appropriate knowledge, experience and skills to undertake this work and, of course, the appropriate equipment to carry out the tasks.

There is always going to be a cost even if the club chooses to do the work in- house using non paid volunteers. But, these volunteers still require machinery to do the work.

The choice of machinery and resources required will depend on the following factors:

Before we discuss what machinery a club should have, we need to determine how this work can be completed.

There are a number of options for the club to choose from:

The higher up the leagues you go then it follows that a better standard of care is undertaken, and required, with many clubs employing dedicated groundstaff.

The work is predominantly carried out by volunteers. These clubs usually have two or three pitches to look after and they tend to be soil-based. They tend to get very basic maintenance, in most cases just a cut and mark out during the season, with some token of end of season work. 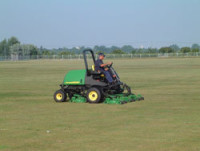 Many National League clubs tend to have even more pitches to look after, often as many as eight. These tend to be soil based, with the exception of perhaps the first team pitch that may have been upgraded in terms of drainage performance, either by having an extensive drainage system, along with a modified upper rootzone (sand ameliorated in the top 100mm of soil.

This investment often means that these modified pitches need an increased level of maintenance in terms of mowing, watering, feeding and aeration regimes.

Their basic needs will be similar to the grass roots level clubs, however they should invest in some additional machinery to cope with the extra workload:

Most premiership clubs now have a dedicated stadium pitch and a number of training academy pitches that may be on the same site or at another location. With the emphasis on attracting top class players the playing surfaces at the club have to be in the best condition and well presented. The only way to achieve this is to increase the level of maintenance inputs and upgrade facilities to cope with the high demands of the modern game.

These pitches are in demand seven days a week particularly the training pitches. Many of the top flight clubs in recent years have gradually upgraded their stadium pitches, often moving to a more sand dominated reinforced rootzone free draining construction.

However, these types of pitches require a higher level of maintenance inputs to keep them in tip-top condition, resulting in the club having to employ full time groundstaff and the appropriate equipment to maintain their pitches.

The frequency of feeding, mowing and other cultural practices are magnified several times over. Mowing is often carried out on a daily basis, sand based pitches need more feeding and watering.

Groundsmen at this level prefer to box off the clippings when mowing and they also like to lower the weight of the machine to reduce compaction. Therefore, many Premiership Groundsmen use 36" walk behind cylinder mowers with collection boxes such as Allett, Dennis and Ransomes.

The groundstaff also spend more time watering, feeding and aerating their pitches. They would also have a sprayer to apply fungicides, weedkillers and fertiliser products.

Whatever level of club, there is a need to undertake end of season renovations to improve the performance of pitches. The level of maintenance undertaken will be dependent on the condition of the pitch. The norm is to mow and scarify out some surface debris, decompact the pitch, fertilise, topdress and overseed.

Usually, clubs at the higher level have the machinery to do this work themselves. However, for the majority of clubs, it will be a case of employing a sportsturf contractor who is geared up to complete this work quickly and efficiently.

Listed below is what I consider to be the basic minimum level of renovation works undertaken at the end of the season. It is based on a 7000 square metre rugby pitch.

At the end of the day clubs will have to face up to fact there is a cost for maintaining winter games pitches.

Based on the above recommendation, plus the ongoing general maintenance, the annual cost of a single soil based pitch is likely to be around £8-10k. A hefty amount for most local clubs.

These costs can be reduced if the club undertakes some of the work in house, but that depends on having the right equipment and skills. Contractor prices generally come down if there is more than one pitch to maintain, so maybe there is an opportunity for several clubs to join together and benefit from the economies of scale.

Clubs could also look at ways of generating the necessary funds by organising a series of activities with all the proceeds earmarked solely for pitch maintenance. For example, most clubs run Sundays morning sessions for kids, in some cases with a couple of hundred turning up. A token charge of £1 would potentially bring in several thousand pounds - a significant contribution to the maintenance fund.

There are many imaginative ways by which clubs have raised money, but I suppose what I am saying is that, unless clubs give pitch maintenance the highest possible priority and the funding to support it, the decline in standards will continue. As a consequence it will become difficult to attract youngsters into the game, and existing players will move on or out of rugby altogether.

Look after the grass roots of any sport and it will thrive. All it requires is for clubs to see the importance of taking that statement seriously and literally.