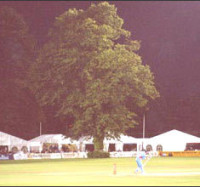 To be fair, the 200 year old tree was weakened by disease and was likely to be felled in the near future, however it is sad to lose such a traditional and unique sporting feature.

It will be interesting to see what the cricketing authorities decide to do. An potential replacement for the old lime was planted in 1999 but is only five feet tall. Whether the young stripling will be allowed to take over the now vacant position within the boundary remains to be seen.

The MCC have given permission for a replacement, but the substitute is not yet ready for the rigours of first class county cricket.

A seven foot stump is all that remains of the old lime and it would be fitting to leave this in place until the stripling is up to the required standard. In sport, many a young talent has been destroyed by being bloodied too early.

And, to lose a lime before reaching its prime would be a crime!