The garden machinery industry has lost one of its most successful and enigmatic characters. Robin Nettle, co-founder of Winchester Garden Machinery passed away on Saturday 5 May aged 69. He leaves his wife Judith, two sons Toby and Jason, daughter Louise and six grandchildren. Robin was diagnosed with cancer a couple of months before Christmas after feeling unwell whilst on holiday. Although he underwent extensive treatment and chemotherapy in the New Year, he insisted (as was usually his way) on not only finishing a project to make his garden safe for the grandchildren, but he was out with Jason delivering mowers only a couple of weeks before his last few days in a hospice.

It was whilst they were both working at Huxleys in Alresford that Robin teamed up with Andy Hoskings when they spotted an opportunity to open a garden machinery business in Winchester in 1971. "It was a relatively untapped area," says Andy, "and we managed to find a unit on an industrial estate."

As the business grew, they realised they needed to be more 'in the sun' and a chance conversation with local garden centre owner, Hillier and Sons, saw them offered a greenhouse on their site in Winchester in 1975. With a long heritage as nurserymen, and holders of the Royal Warrant since the 1930's, Hilliers Garden Centres had long been a destination venue. It proved to be an inspired move, the vastly increased footfall really opened up new business in an era before the 'sheds' were fully established.

The greenhouse was soon replaced with a purpose-built showroom, and over the years, Winchester Garden Machinery established branches at Hilliers at Liss and Sunningdale. George Hillier, great, great grandson of the founder says that the relationship with WGM was always more of a partnership than that of an owner/tenant.

As the industry evolved from the days when dealers were severely challenged competing with the 'big-box' stores, through to the internet era which became more a level playing field for dealers, Robin was always ahead of the curve in making sure that WGM offered a personal service to customers that paid dividends in customer loyalty and repeat business over the years. When the opportunity arose, WGM were one of the first specialist dealers to embrace an on-line presence, but ensured that customers always knew that products were backed by a 'bricks and mortar' business with a solid heritage.

With my Service Dealer hat on, and when anywhere near Winchester, I knew I could always be assured of an open door, cup of coffee and 'both-barrels' on whatever issue was taxing Robin at the time. Much of it was unprintable for legal reasons, but as an insight into the mind of a real 'thinking-dealer' it was always exhilarating and never less than highly relevant. 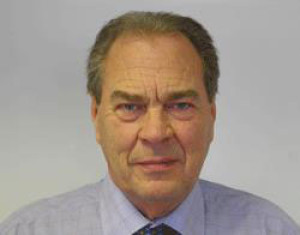 Keith Christian of BAGMA in his Claymore days dealt with Robin on a regular basis. "He could be complex in many ways," he says, "and often kept you talking, waiting for an order, teasing you, only to open the desk drawer to pull out an already written order just before you left. Arguments with him were inevitably pointless because he often had the last word - and was invariably right. That said I cannot think of anyone in recent years who has had the drive, the foresight and the personal magnetism of Robin. Our industry will be the poorer without him."

David Hart, then Divisional Manager for Turf and Utility Equipment at John Deere said, "I don't know what word to best describe Robin. On the surface he could irascible, tetchy, and even cantankerous, particularly when faced with a demanding supplier! But he knew the industry inside out, and championed the specialist dealer at every opportunity. And what a salesman! He often helped man our stand at Chelsea Flower Show and knocked the spots off everyone else. To see him sweet-talking a customer as if butter wouldn't melt in his mouth was quite a contrast to some of the negotiations we had over the years. Robin was a very special person, we'll miss him tremendously."

Final word to an unnamed dealer who said, "Heaven is now in for a real wake-up call!" And I suppose if there is a such a thing as a celestial garden machinery dealership involving the likes of Peter Rochford, John Bufton and now Robin Nettle, what a formidable outfit that would be!

A charity donation page has been set up in Robin's memory. It will support the Rosemary Trust which provided Robin with 'at home' care and St Michaels Hospice where he spent his final days. Click here for details