0 Safeguard your turf by choice, not by chance!

A turf disease previously more common in the US, incidences of Brown Patch are becoming more frequent in high-end stadiums and training grounds across Northern Europe and here in the UK. With Perennial Ryegrass long being the staple species for football mixtures in the UK because of its resilient nature, tolerance of a variety of soil types and rapid germination and establishment, there was a rise in cases reported during summer renovation season - with young seedlings particularly vulnerable to fungal attack during the establishment phase. Derek Smith, Amenity Sales & Marketing Manager at DLF discusses the solutions. 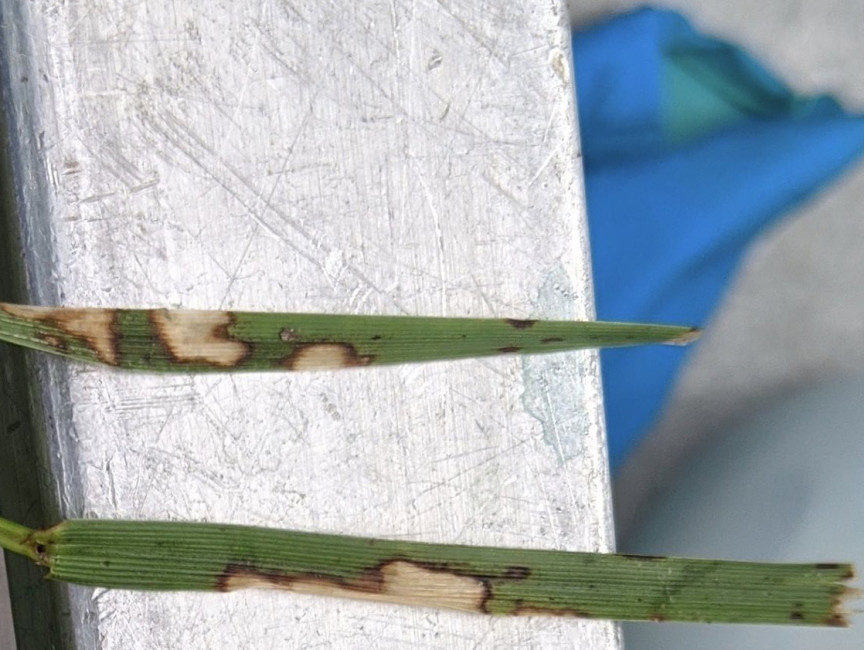 Brown patch is a turfgrass foliar disease caused by the fungus Rhizoctonia spp. All cool-season turf grasses are susceptible to potential attack by the fungus, however it has been found to be most detrimental to bent grass, ryegrasses, annual meadow grass and some fescue species. Attacks are often triggered by hot, humid conditions with an increase in cases identified on plants that are moist and/or have been over-stimulated with nitrogen-based fertilisers.

Symptoms of Brown Patch will be dependent on the mowing height. In close mown conditions, identification will be via noticeable patches, which can vary in colour from tan to darker brown. On higher cut surfaces, any visible patches are likely to be lighter in colour with Brown Patch often diagnosed in these instances upon closer inspection of the individual leaf - which will display tell-tale lesions that are tan in colour, with a distinctive dark brown border. In severe cases, it can result in a total loss of grass cover in the affected areas.

A turf disease previously more common in the US, incidences of Brown Patch are becoming more frequent in high-end stadiums and training grounds across Northern Europe and here in the UK. With Perennial Ryegrass long being the staple species for football mixtures in the UK because of its resilient nature, tolerance of a variety of soil types and rapid germination and establishment, there was a rise in cases reported during summer renovation season - with young seedlings particularly vulnerable to fungal attack during the establishment phase.

To ensure they are producing product not just fit for today, but equipped to deal with the challenges of tomorrow, DLF have been working on a screening programme for Brown Patch for the last two years. Trials have been undertaken at facilities across their global research and development network - in particular at the MariboHilleshög Research AB laboratory in Landskrona, Sweden. MariboHilleshög is a facility specialising in fungal testing and research, with years of knowledge and experience in the area of Rhizoctonia fungi. 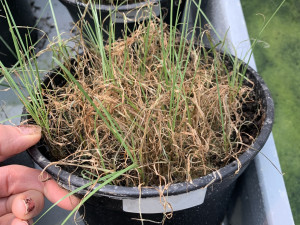 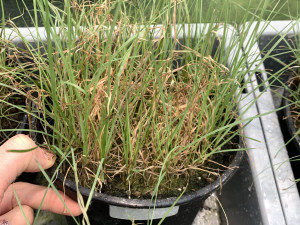 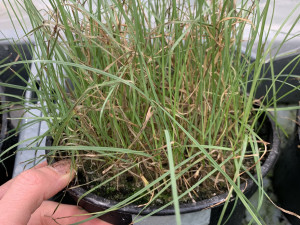 From left to right: Low, average and high tolerance

Samples of a particularly virulent European strain of Brown Patch were harvested from a football stadium environment and were studied by plant pathologist Louise Holmquist. Screening of the samples was performed in the state-of-the-art laboratory to optimise the screening procedure.

Tests were conducted over the two-year period, measuring the tolerance of more than 30 perennial ryegrass varieties - including nine 4turf® tetraploid perennial ryegrasses - inoculated with the Rhizoctonia isolate. In the 2021 experiment, the seeds were sown at the end of January and were cut twice a week up to the inoculation, which took place when the seedlings were six weeks old in early March. Each variety was then scored weekly for plant health over the course of the next four weeks.

The data was then studied and compiled by DLF's Product Development Manager for Turf, Anne Mette Dahl Jensen. "We were able to determine with confidence that there was a significant difference between the diploid and tetraploid varieties when it comes to Brown Patch tolerance," she explains. "By conducting trials in the lab, we were able to ensure that all the grasses were inoculated at the same time, with the same amount of fungal inoculum, at a time when the grass is predicted to be at its most susceptible. As the chart below demonstrates, the 4turf® varieties demonstrated strong tolerance to the Brown Patch, which correlates with the results we've seen in other disease trials where 4turf® species have outperformed traditional diploids. However, it was great to see that there were a few outstanding diploid DLF varieties that also demonstrated good tolerance to Brown Patch." 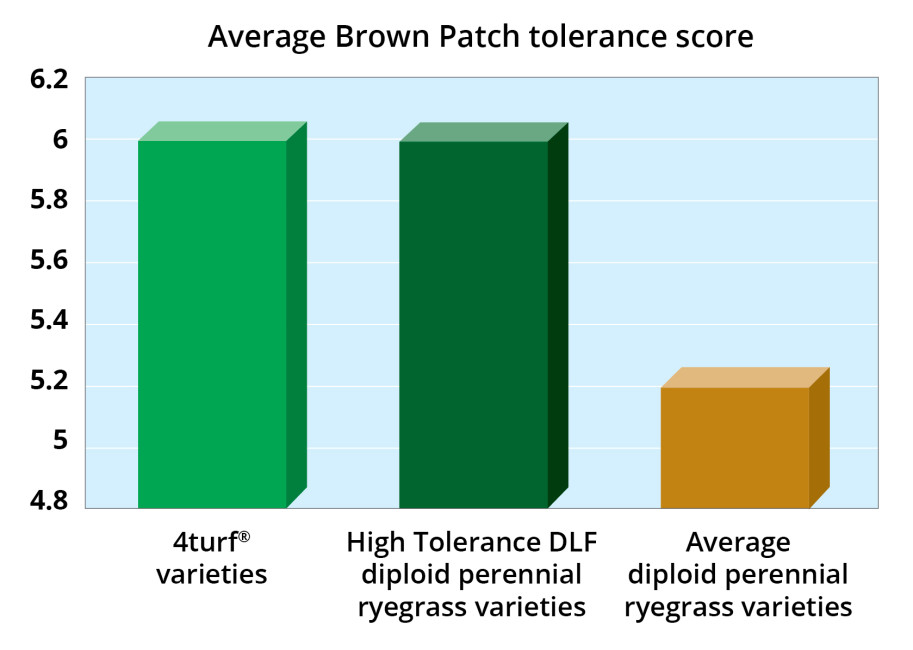 The larger seeds of DLF's 4turf® tetraploid perennial ryegrass contain more energy reserves for even stronger, faster establishment and healthy plant development. When compared to more traditional diploids, 4turf® demonstrates better germination at temperatures as low as 4OC, providing an advantage for cool season overseeding. The larger root system and natural water reserves also means it is more tolerant to drought and a range of other environmental stresses. In European trials, 4turf® has shown the highest disease resistance during the autumn and winter months, as well as increased resistance to weed invasion due to its rapid establishment, reducing the need for costly and environmentally detrimental fungicide and herbicide applications.

The sustainable credentials of 4turf®, together with its more resilient properties, has seen its inclusion in a number of Johnsons Sports Seed mixtures popular with football clubs. One of which is FIFA's 'Greenest Football Club' - Forest Green Rovers. "We complement J Premier Pitch with Johnsons J 4Turf mixture, with Tetraploid Perennial Rye, for winter overseeding," explains Grounds Manager Nigel Harvey. "This gives us additional strength in high wear areas such as the goalmouths, as well as helping to repair any damage or bare patches through the cooler months. With fewer conventional tools and techniques at my disposal for both weed and disease control, Johnsons puts us in the best position to retain coverage and plant strength."

New for 2022, J Premier 4Turf is a brand-new mixture in the Johnsons line-up. Using the findings from the trials, J Premier 4Turf is the first mixture of its kind to combine the top-performing diploid and tetraploid perennial ryegrasses from the trial to deliver improved tolerance to Brown Patch - all whilst retaining the class-leading wear tolerance and high visual merit of the original J Premier Pitch mixture.

J Premier 4Turf takes full advantage of the most resilient varieties, with 20% tetraploid ryegrass - formulated with 10% FABIAN and 10% TETRAGAME. 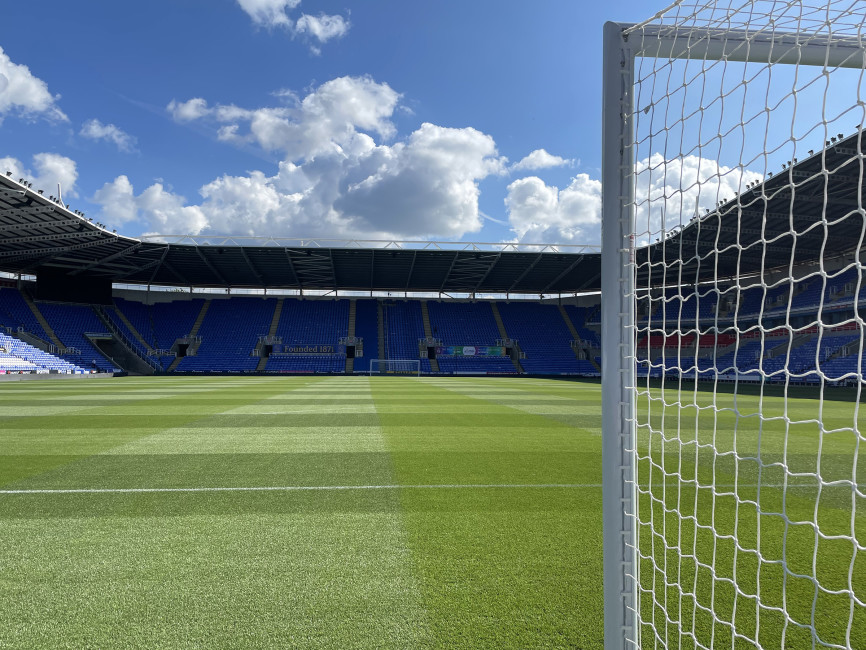 Having long been a user of Johnsons J Premier Pitch mixture, Head Groundsman at Reading Football Club, Chris Last, was keen to explore the benefits of 4turf® and, following ongoing dialogue with the DLF technical team since early 2019, became the first to trial the new J Premier 4Turf mixture. In conjunction with the trial results, the objective was to deliver a mixture with even greater resilience, even faster establishment and improved wear tolerance.

"Having not used 4turf® before, it was interesting to see how well it thrived in our environment," Chris explains. "We seeded, then sheeted and, within just three days, the 4turf® was up without the need for excessive levels of input. We were then cutting within a week. As the months progressed, myself and the team at DLF have been avidly observing the sward and how it copes with the issues - particularly disease pressure - at various times of the year. July has always traditionally been a hot-spot for Brown Patch, but last year we saw nothing at all. The additional resilience of the 4turf® has meant that even during high-pressure periods for Fusarium in September and October, any small signs have not turned into full outbreaks. Without question, we have retained far more overall coverage than we have in previous seasons."

Disease control has become a greater challenge for many turf managers, as they seek to reduce the number of artificial chemicals and pesticides they use. Anne Mette continues, "Using 4turf® and specific DLF diploid varieties provides a natural solution against Brown Patch and ensures that our customers are getting the right products that deliver added value. Choosing varieties with proven high Brown Patch tolerance not only reduces the reliance on fungicides but gives a better pitch quality that can withstand the pressure of more playing hours, which all equates to increased peace of mind."