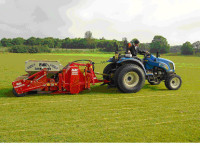 Over 350 tonnes of Moist Grade 28 drainage sand supplied by WBB Minerals, were injected into practice pitches at Christopher Park training Ground Wigan. Using the latest Blec- Vibra Tine Sand Master, the contactors were able to produce 140,000 linear metres of sand bands at 25cm spacing's and to a depth of 20cm over a period of 5 days. " The Sand-Master is a brilliant machine, and the Vibra-Tine technology means that the sand bands are consistently filled and consolidated from the bottom of the channel right to the surface" says Sports Turf Contracting's John Reynolds, who in conjunction with Gary Mumby from Blec demonstrated the machine to Wigan FC's Chairman, Dave Whelan. The results have dramatically improved the drainage according to Rob Turnbull, Head Groundsman at Christopher Park. "We have always had problems with poor drainage on these areas and, although we installed a primary piped drainage system not long ago, soil compaction is always a problem on the heavily used pitches." Says Rob. He continues, "We had a demo from Blec with a view to buying a Sand Master, but decided to go down the contracting route initially, and called in John Reynolds and Richard Peel from Sports Turf Contracting Ltd. They did a great job and transformed the surface and root-zone drainage without any surface disruption before we over-seeded the pitches. Three weeks later the sand channels were virtually invisible and the 1st team were practising on the turf without any problem even after the really heavy rain we had suffered. I would recommend these guys to anyone."

Image 2: The sand channel is consistently filled from full depth to surface by vibratory action, which shakes the material into slits made by the cutting blades

Image 3: Wigan Athletic FC's 1st team at practice only 3 weeks after work was completed-sand bands are only just visible