The silent killer carbon monoxide will become less of a threat to personal safety if things go unexpectedly wrong wherever people gather. They may be visiting or living in golf club property, working in offices or occupying residential buildings.

Flowtech Controls Ltd, at Whitchurch, Shropshire, and part of Peerless Gas Controls Group, has developed the Flowtech Wireless Gas Detection & Shut Off System to detect not only carbon monoxide but also natural or liquid gas. It then cuts off the gas supply to prevent the possible build up of potentially dangerous gas concentrations.

Carbon monoxide is a product of incomplete combustion of all fossil fuels. Inhaling the gas reduces the blood's ability to carry oxygen, leaving the body's organs and cells starved of oxygen. Carbon monoxide is a very poisonous gas with no taste, no colour and no smell, which is why it is referred to as the "Silent Killer". It can be produced by a boiler when there is insufficient oxygen in the air supply to the combustion chamber. It is also produced by faulty gas fires and other gas appliances. Carbon dioxide is the normal output from a boiler but this can be replaced by carbon monoxide with reduced ventilation or a blocked flue.

A move into the Russian federal territory of the Caucasus has been made by Flowtech Controls as the company aims to step up sales of its Gas Detection & Shut Off Protection System.

Flowtech Controls has appointed GaZTech as its representative in the Caucasus region. The Russian utility giant GazProm is one of GaZTech's customers.

The company has brought the system to the UK market for installation in residential and recreational properties, which also includes golf clubs and other sporting venues.

Gas detectors are located around the property to provide both visual and audible alarms in the normal manner when potentially harmful levels of gas are detected, but in addition the Flowtech Controls system will also send a wireless signal to a panel which controls a shut-off device. This closes the gas supply to prevent a further build-up of either carbon monoxide or other combustible gases.

Once the supply has been shut off the valve can not then be reset to get gas flowing again until the hazard has been cleared and safety restored. Several local authorities are already testing the system, with feedback being very encouraging.

Its use is also being tested by the leisure industry for installation in static holiday caravans, chalets, holiday homes and boats.

The installation of the mechanical control valve is a simple and inexpensive job which does require a Gas Safe Registered Engineer. Installation of this system could also have the benefit of reducing insurance premiums which would assist in paying for the product and fitting costs.

Mike said: "At golf clubs, as an example, it is not just about handicaps, with safety also being a very large and important part of the game. Having a Gas Detection & Shut Off System installed to give protection to the large number of members and staff, as well as people who visit and those families living in club accommodation, would add greatly to the safety of people as well as safeguarding valuable premises.

"If there is a poisonous or combustible gas leak the system intervenes through the sensor sending a wireless message to the control panel which then sends out power to the shut-off device. This closes the gas supply to prevent the very present risk of poisoning, fire or explosion.

This safety system incorporates within its detectors a long life catalytic sensor manufactured by a specialist company in Japan and up to 40 Detectors can be used through one control panel - about the dimensions of a postcard - making it ideal for multi-occupancy premises and also almost eliminating the risk of an explosion in the event of a gas leak. 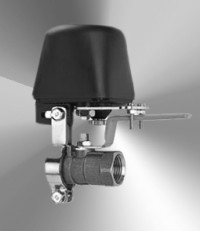 Mike said: "The advantage of the Gas Detection & Shut Off System is that it does not only rely on a flashing light and an audible alarm. There may be nobody around to see it or people may be sleeping. Flowtech's system automatically takes action when the gas is sensed and shuts off the supply of gas"

For residential protection there is a wired system and a wireless system, both with a choice of either a motorised ball valve or a mechanical control valve to shut-off the gas supply. Both systems are approved to EN50291 carbon monoxide and EN50194 combustible gases standards.

Simon Simpson, Commercial Director of Flowtech Controls, said the relationship with GaZTech had developed when the Russian company made it known that it was looking for a gas detection system to install in new developments and buildings now being built in Caucasus towns and cities. They must meet new laws covering Russian construction standards.

Simon said: "This is a big step forward and we believe there is a very good business opportunity following the decision by the regional authorities to introduce new laws which mean new premises must have a safety certificate which requires the installation of a gas detection system.

"This is where Flowtech's Gas Detection & Shut Off System has come to the fore and GaZTech has set itself to become the main player in the region - which has a population of about 10 million - as well as wider Russia. GaZTech is very interested in this British product."

Rasulov Ali, GaZTech's Purchasing Manager, said his company's main client was GORGAZ the authority for safety and maintenance. "Most of the Russian cities are still in the progress of development with new living quarters under construction and the demand for safety technology is now coming through but it must be the right technology that we supply".

"Our discussions with Flowtech Controls are going very well," said Rasulov, "GaZTech is already applying for certification for the Flowtech system which is necessary before any sales of the product can start in Russia. "In the Russian market the main advantage of the Flowtech Controls system is that it is wireless and cost-effective to install and it also provides an option to the client about which shut-off valve to use," said Rasulov.

These comments equally apply to the UK market where there is already a great deal of interest from many sectors, with the Flowtech Gas Detection & Shut Off System being recognised as offering significant levels of protection in premises where the safety of people and property is a major concern.