Andrew Rodwell is a larger than life character who runs a 'little' company manufacturing niche products for the care of turf and artificial surfaces. 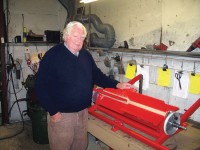 Conventional wisdom dictates that manufacturing companies in the groundscare industry operate within a closely defined set of rules. Once there is an idea on the table for a new product, market research would be carried out on its potential. On the basis that there is a market, a design would be drawn up and prototypes built, which would then be thoroughly tested. Assuming the prototype performed to expectations, production would start and the product launched. It is safe to assume that most manufacturing companies in this industry would follow this method of bringing a product to market. As is always the case though there are exceptions.

Some companies, either because of the type of product they produce or because of the way they manufacture, do things in a totally different way. One such company is SCH whose principle business is the manufacture and supply of high quality, competitively priced attachments for small tractors. Within their very wide range there is a machine for just about every job that anybody could possibly wish to carry out on turf. The company also manufactures a range of pedestrian products, again for groundscare applications.

SCH's main customers are large estates and local authorities but, more recently, sales of products for artificial surfaces have been steadily increasing. If all this isn't enough to keep the company busy, and satisfy its wide customer base, SCH also has bought the manufacturing rights for the Bonsar truck.
Based in Holbrook, a picturesque village on the outskirts of Ipswich, it is not the easiest of places to find. Upon arrival it is tempting to comment. "What a strange place."

Manufacturing is carried out in a number of old buildings, but the first time visitor should not be put off by the lack of a modern factory. Within the buildings and the small administration block there is a sense of purpose and urgency by the employees. Whether it is the four drivers who deliver products to any one of 1100 dealers throughout the UK, the people that manufacture and build the products or the office staff who cope with the day to day administration, every employee knows exactly what is expected of them. With just 23 employees, including Andrew Rodwell the owner, it is essential that everyone works together and gets the job done. No talk of demarcation here. 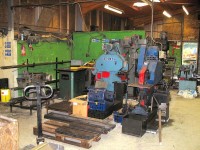 Andrew is a large man, in every respect, with a commanding presence. There is no doubt that he is the boss but he runs the company with a "light touch." His employees, many of whom have been with him for more years than they care to remember, treat him very much as a work colleague and not just the boss.

Andrew is proud of the people that work with him and relays the story of a disastrous fire at the company three years ago. The fire did a huge amount of damage to the buildings and destroyed most of the stock. The day after the fire Andrew spoke to all of the staff and explained the enormity of the task of rebuilding the company. Without exception all the employees stayed on and worked all the hours necessary to satisfy the order book. Despite the damage not one order was lost. That loyalty means a great deal to Andrew.

The company is on what was the Rodwell farm. The farm is no longer, but Andrew is still very proud to be the fifth generation of Rodwells on the grounds.
SCH still retains the name of the company that Andrew first started -Steam Cleaning Holbrook. As its name implies the company carried out steam cleaning, mainly to chicken farms in the area.

After this business went into decline he had a need for a simple slitter. There wasn't one on the market that suited his needs so he designed one himself and subcontracted the manufacturing to a local engineering company. He very soon saw the potential for his design, and other niche machines, and started manufacturing at Holbrook some twenty-two years ago.

Although he is at the age when he should be taking things easier his enthusiasm means he is still at the helm every day. In deference to his long suffering wife though he does try and take the afternoons off!

The unique aspect of SCH is the way that products are developed. Andrew is not an engineer by training but obviously has a remarkable flair for it. Each and every one of the products he makes at Holbrook is designed by him and starts of with an idea in his head or from one of his many regular customers throughout the country.

From the original idea to the product available for sale takes, on average, no more than three weeks. Whilst the products are relatively simple this is, by any stretch of the imagination, impressive. At all times throughout the design process simplicity is at the forefront. Using standard bearings and belts available anywhere, the spares trade, by design, is virtually non existent and means running costs are low.

Not only is the way that the products are designed and produced different from the 'norm' the business ethics are also different. Andrew is often approached by companies offering to supply components at more competitive prices than they currently enjoy. In such a situation contact is made with the existing supplier and the position explained. Sometimes the supplier will do something on the price but, even if he is unable to so, doesn't mean the business will be lost. Business relationships, which include loyalty, are important to Andrew, much more so than price alone.

That doesn't mean to say that Andrew is a soft touch. Like all entrepreneurs he knows what is right for his business. The person who tries to pull the wool over his eyes, whether it is a supplier, dealer or customer will soon have the SCH side of the story explained politely but forcefully. Asked whether he would consider buying from China; his answer was a very emphatic no. 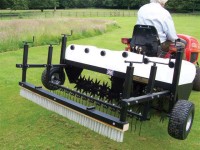 The manufacture of products at SCH is simple and very effective. There is no computerised manufacturing programme but a simple system of building machines from kits. Once the stock of kits is depleted more kits are made ready for assembly. Over the years this system has been fine tuned and there is no doubt that it works very well. Whilst this means that perhaps more stock is held than many would like it doesn't cause a problem for SCH and does mean that, in most cases, orders can be fulfilled quickly without long lead times. The machine shop, welding area, paint shop and assembly lines could, in no way, be described as "state of the art" but, again, it is right for SCH.

The groundscare industry has been going through tough times over the past few years and recent events within the banking world, and its repercussions, will inevitably make trading even more difficult.

Local authorities are bound to make economies in the current climate but, with the comprehensive and ever expanding range of products on offer, Andrew is not unduly concerned. He is, being an astute businessman, only too aware of uncertainties in the future but is optimistic that the highly regarded and successful company that he and his staff have built up over many years is well placed to be around for many more years to come.