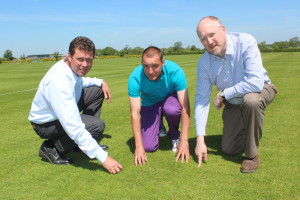 Groundstaff at Oakham School, Rutland have slashed their fertiliser costs by around 75% following a switch to using Compost Tea.

An initial trial of a more sustainable and environmentally friendly turf care regime designed to improve the school's sports pitches and grounds has been so successful in restoring the health of a selected trial area that head groundsman Richard Dexter plans to roll it out across all the school's sports fields soon.

Oakham has 48 acres of sports ground, which include six cricket squares, grass nets, an athletics track and other sports during the summer, while in the autumn and spring terms they support nine rugby, six football and five hockey pitches.

Richard faces a dilemma in managing them, because during term-time they are in daily use: "The pitches are ryegrass, which is a very hungry species of grass, so we have to feed it efficiently to keep the sward healthy. But I am not comfortable applying granular fertiliser during term time - you wouldn't give the pupils bags of fertiliser and suggest they play with them!

"This year we had a real issue because the weather during the Easter holidays, when we would have normally spread fertiliser for the first time, was too cold for the grass to use the fertiliser effectively, which would waste money and be unsound environmentally.

"In the end we held off and made the granular fertiliser application during the half term break, which was much later than ideal".

His new regime aims to solve the dilemma - and put him and his staff back in control of application dates - by using more natural products in a treatment that can be applied at any time.

The key element is Compost Tea, which is made by suspending quality compost in aerated water and "brewing" it for 24 hours, a process that increases the population of microbes many times over. The Tea is applied through a conventional sprayer and can be tank-mixed with a range of other products.

They plan to apply the Compost Tea every fortnight, adding liquid carbon to provide sugars that provide a food source for the bacteria and either liquid urea or a liquid seaweed feed from The Glenside Group:

"We decide which product to use according to the time of the year and the condition of the turf. If it is stressed for any reason we tend to use the seaweed treatment due to its natural properties and the benefits it provides.

Richard introduced the new system a couple of years after he arrived at the school: "For the first couple of years I stuck with what I had inherited. But we were far too dependent on chemicals, and decided to introduce a purpose-designed regime that would improve the quality of grass growth.

"We completed a detailed soil survey two years ago, which gave us a really accurate and honest picture of our soils and showed that it was dominated by calcium, which was 'locking up' the magnesium so it was not available to the grass.

"We also had high iron levels - indicative of compaction and anaerobic conditions, but phosphate and potassium levels were good.

"As a result we applied kieserite to boost the magnesium levels and return the soil to better balance, and started on a programme to increase soil organic matter, with the applications of Compost Tea helping achieve that.

"From an environmental point of view we should be able to greatly reduce granular fertiliser applications, although I do not expect them to cease entirely. We are also trying to move to a 'little and often' application programme so that we are effectively drip feeding the plant, which we feel will work better than less frequent but larger applications".

The Compost Tea is made in a 400 litre brewer manufactured by Growing Solutions Incorporated - and sold in the UK by Martin Lishman Ltd: "It is very safe to make and use, and on the trial area is proving beneficial to the grass and the soil, and I believe we are improving the quality of both far quicker this way than we would by any alternative method.

In addition, we have almost totally eliminated poa annua (annual meadow grass) and all the pitches look much better".