0 Sea buckthorn - The scourge of the links

Sea buckthorn (Hippophae rhamnoides) is a species of deciduous flowering shrub often found on links courses; it is native to only a few areas on the east coast of Britain but was widely planted at a time when concerns about stabilising dune systems were common. 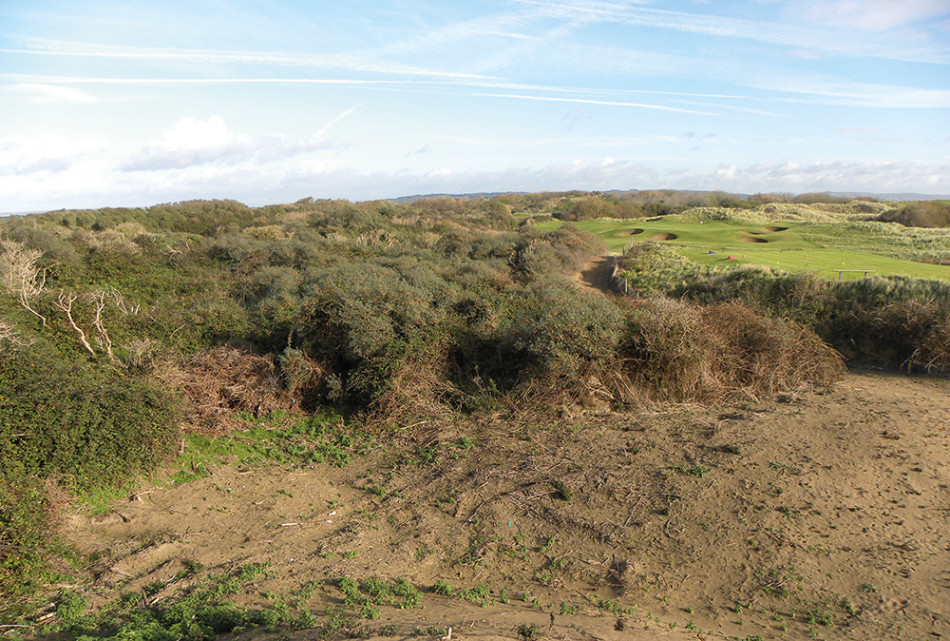 Sea buckthorn has stiff dense branches with silver grey lanceolate leaves and large aggressive thorns. The female plants produce abundant orange/red berries which remain on the plant for most of the winter months. The roots spread rapidly and extensively, providing non-leguminous nitrogen fixing within the soil.

It can grow between 2 and 4 metres in height and spreads rapidly within the ecosystem. The plant is dioecious meaning that the male and female flowers grow on different plants, fertilisation occurs by wind borne pollination.

The plants have very extensive deep roots that have a symbiotic relationship with nitrogen fixing Frankia bacteria. The bacteria convert atmospheric nitrogen into ammonia. Ammonia is used globally as a fertiliser and, in fact, nearly 90% of fertilisers produced worldwide use ammonia as their base.

This creates a situation that suits broadleaf weeds and grasses, nettle, Yorkshire fog and Timothy are often seen within or adjoining sea buckthorn stands as the enriched soil creates the perfect nitrogen rich ecosystem. In the golfing environment, this causes conflict between the fine grasses required for quality playing surfaces and the more aggressive broadleaf weeds. 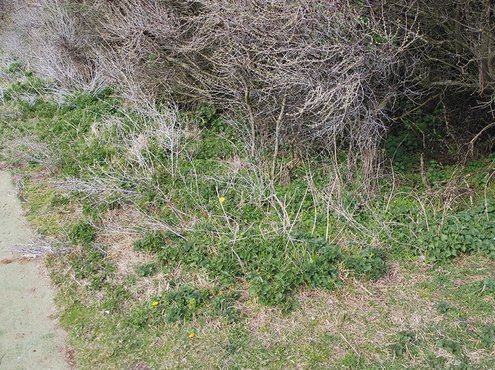 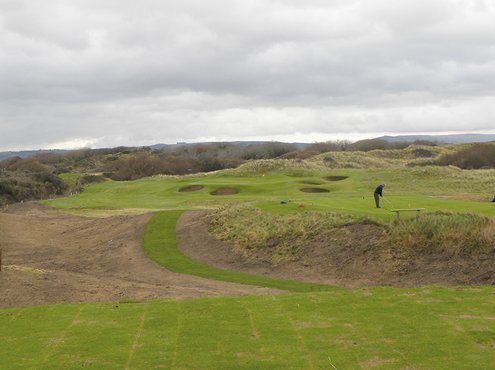 Sea buckthorn is incredibly robust and can grow in temperatures ranging from - 430C to + 400C and can withstand both drought and saline conditions making it one of the hardiest plants.

The plant is very invasive and can reproduce through both seed and vegetatively through suckers from the extensive root system. On dune systems the plant often grows laterally along the ground as the wind and sandy soil encourage instability and horizontal growth.

This creates a situation which allows the plant to colonise adjoining areas more rapidly, as with its aggressive thorns it ensures that mowers and green staff are kept away and a buffer area is produced on the edge of the stands. The buffer is then colonised with new plants which grow heliotropically (towards the sun) creating a new edge and the process continues, and the area of sea buckthorn increases rapidly.

Mowing does limit the spread to an extent but the plant is so hardy this often only results in the plant tillering, in fact I have even seen sea buckthorn growing on greens and surviving quite happily to the dismay of the greenkeeper. Though not good for a smooth playing surface.

"Gorse and water share the disadvantage that it is practically impossible to play out of them, and they are also the frequent cause of lost balls. It would appear, therefore, that they should not be used to any great extent as hazards."

Stands of buckthorn also create the perfect environment for rabbits. Rabbits rarely stray more than 200 metres from their burrows, therefore stands of buckthorn close to playing areas are particularly problematic. Male rabbits make scrapes to define their territory and seem to prefer short mown turf for the purpose, this often results in holes on green surrounds and on fairways. The holes have to be filled in for both golf and safety, however this is often futile as within hours the rabbits return to re-assert their territorial margins, leaving the greens staff frustrated in their efforts.

A female can have 1-14 offspring in a litter, starting at only six months old. Females can become pregnant within minutes after birth. As their gestation period is about one month, one female could hypothetically give birth 12 times in one year, though the mating season is typically the springtime.

So, given an average litter of 6 rabbits is achieved (3 male, 3 female), one mother rabbit x 3 female babies x 12 months = 36 female babies plus mother = 37. The population would increase as follows:

A very frightening prospect if you're a greenkeeper. 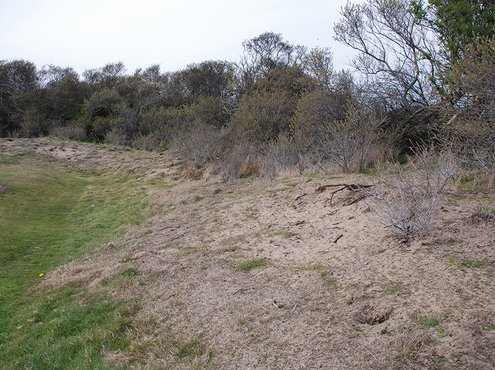 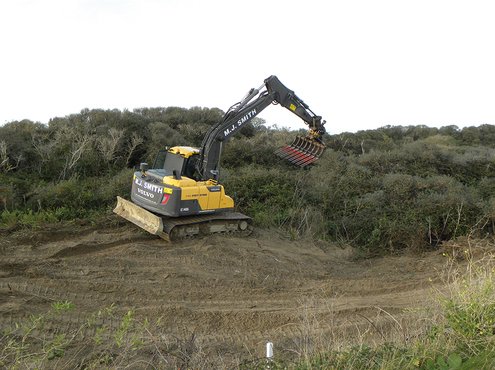 Controlling rabbits on a links course can be very difficult as gassing is not effective as the gas can dissipate in the sand, and often the burrows are not accessible due to their dense form and sharp thorns of the sea buckthorn. The only real option is shooting or ferreting once the buckthorn is removed and access can be gained.

If buckthorn removal is taking place, then the opportunity to destroy the burrows and habitat that protects the colony should be taken. This benefits the long-term control of the rabbits as new burrows in open ground can be accessed. The exposed landscape allows predators such as foxes and birds of prey the opportunity of natural control.

The quality and amount of harbourage are major factors that can determine the number of rabbits in a particular area. Habitat management should therefore play an integral part of any successful rabbit control programme. Scrub and ground cover may need to be thinned sufficiently to give access to all burrows; this is essential where gassing is planned. Also, where practicable, burrow systems should be destroyed following control operations.

The best way to remove buckthorn is by using a forestry brash fork on a suitable excavator to remove the entire plant, including as much of the root system as possible. This is necessary as any vegetative material left in the soil will reproduce through suckers and a major control programme will be required to stop the recolonisation of the area.

The arisings should then, ideally, be burnt in a deep hole; the sand removed from the hole can then be used to recontour. The enriched top soil that has been produced by the sea buckthorn needs to be scraped off and buried in order to reduce fertility and create an ecosystem that favours the fine grasses desired for quality golf surfaces.

It is essential to bury the material at least 2 metres down to stop any regeneration. It is also necessary to monitor for regrowth and treat any suckering with an appropriate herbicide before it establishes. Undertaking the removal meticulously will save a lot of future management works.

Chipping the arisings is also a possible solution, though can be very difficult due to the contorted nature of the plant and the long sharp thorns that it possesses.

On a links golf course, the aim should be to reinstate the dune habitat, this means scraping off the enriched top soil that the sea buckthorn creates. The enriched soil can then be buried along with the arisings and then recontoured using the infertile sand from the excavation of the burial pit.

Ideally, two machines should work in tandem to make the operation efficient, one removing the thorns and the other burying and recontouring as they go.

Sea buckthorn has a range of negative impacts in dune systems, replacing diverse dune vegetation with a buckthorn monoculture, enriching the substrate and stabilising the dune system (a number of species in dunes depend on dunes being low nutrient, dynamic systems).

Natural England always seeks to remove buckthorn from dune systems where it is not native (or at least reduce to very low levels). They funded the club to do some buckthorn removal through a Conservation and Enhancement Scheme (CES) that ran from 2010-2015, and it was great to see some significant stands removed. Species-rich dune vegetation has colonised a number of these areas which is fantastic.