by Steve Mitchell
in Training & Education, Golf, and People
on 20 Jan 2020 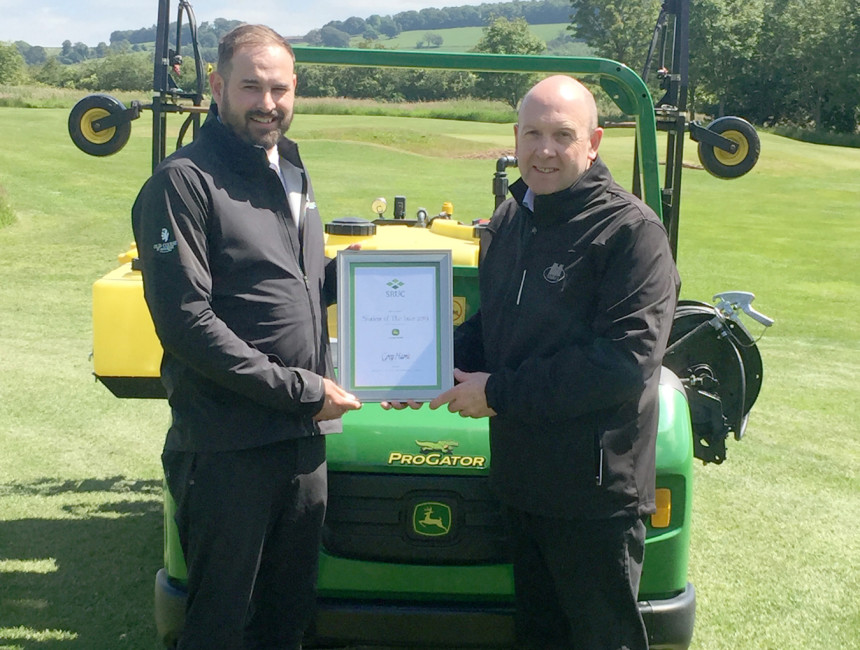 Born in Dundee and brought up in Kirkcaldy, Greg took up an apprenticeship with the Royal Navy at the age of 19 and spent 12 years with the service until he was medically discharged in 2016 with knee problems. However, this paved the way for his next career move into greenkeeping and golf club management, as he was still encouraged and able to play golf.

While deciding what to do next, Greg was playing regularly at The Duke's Course at St Andrews as well as his father's local club at Glenrothes, where the pro mentioned the SRUC course.

"I realised I was never going to be a good enough golfer to turn pro, but taking up the greenkeeping option meant I could still be active and involved in the industry," he says. "I attended an open day at the college, where I spoke to course tutors Paul Miller and Ian Butcher who outlined the opportunities and were very supportive, so I put in my application and was accepted.

"I thoroughly enjoyed the course and the people I met. I think my Royal Navy background prepared me well for many aspects such as planning and teamwork, which are key skills for any greenkeeper. The academic side of things was never a problem, and I also enjoyed the hands-on time spent as part of the tournament support team at Kingsbarns Golf Links during the Alfred Dunhill Links Championship.

"Everyone there was really accepting of me, considering my relative lack of practical skills. They recognised that I was there to learn and it was a great experience, apart from my least favourite job, swishing the dew off the greens!

"The John Deere award was mentioned at the beginning of the course, but I never gave it another thought. When Ian told me towards the end of the academic year that they were going to nominate me and I then found out that I'd won, I was really surprised but also very proud of the achievement.

"Since graduating I've ended up away from greenkeeping, and moved more towards golf operations - I worked in the pro shop at The Duke's Course for the season following the course, and currently I'm assistant store manager for American Golf in Dundee. I did plan to return to Elmwood and do the HND course, but as that isn't running this year we'll see what happens next. If it runs again it would be a really good opportunity to go back and see how I can progress in my second career."

Course tutor Ian Butcher, who is based at the Elmwood campus in Cupar, Fife, adds: "Throughout his time at SRUC Greg was a positive influence on the student group. He was a natural leader, and many times supported both individuals and the HNC team as a whole to meet various challenges. He consistently showed initiative, enthusiasm and a capacity for mentoring which is rare. This is of real value to us as an organisation, as we seek to involve our students more in the development of the SRUC programmes.

"Greg is one of a new breed of graduates who are open-minded as to their career paths, and is enthusiastic about gaining experience beyond the golf course maintenance shed. Taking advantage of workplace experience in customer services at The Duke's clubhouse within the Old Course Hotel Golf Resort at St Andrews is an example of Greg having a more varied role in golf operations during last summer.

"His passion for the game combined with a long-term career perspective opens more doors for Greg, and we trust he finds the right opportunity to progress in his chosen profession. We look forward to him being a great ambassador for us."