Second Division Groundsman of the Year plans for the Third 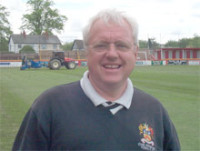 "I'm more pleased this time than when we first won it in the Third Division. In this division we were up against the QPR's of this world, the Wycombes, Wigans and Huddersfields, all big clubs. I was chuffed to hear the news."

Like most Groundsmen, Mike was keen to praise the support he has had from others, "There's been a lot of

Also the directors. I go to them and ask about buying new machinery. I explain to them why it's needed and they back me. I'm very lucky that way compared to some Groundsmen at other clubs, where perhaps there isn't the money or the enthusiasm from above."

In total Cheltenham have had 42 games on their pitch this season, 9 of those in 5 days during the final week. Mike has also had to work around Friday training on the pitch introduced by the new manager, Bobby Gould.

Mike estimates that, in total, he has spent in excess of £100,000 on the pitch, including machinery - an Allett 42 inch cylinder mower, a Groundsman spiker, a little Westwood tractor used for brushing, and a Toro triple ride-on.

Mike considers himself fortunate with his stadium, built when the club was in the old Southern League, "The beauty is we get all the wind in here, all the light and sunshine. Even with our new stand, it's built at the right height, and I'm very grateful for that.

When you look at Man Utd or the Millennium stadium, both beautiful grounds, but can't get any light or air in. I feel very sorry for the poor

When you bear in mind that, as part of his role at the club, Mike also oversees the work at their recently acquired training ground, supervises the stadium cleaning after matches and travels with the first team as kit man, it is highly unlikely that the Groundsmen at the top flight clubs would swap places with him!

This is Mike's 5th closed season with Cheltenham and he has plenty of work planned on the pitch despite the fact that the club failed to avoid relegation on the last day of the season and, come August, will be kicking off back in the Third division.

The sand was then brushed in, prior to over seeding using a 1.5 m Blec disc seeder. Finally, we fertilised the whole pitch with a 12:6:6 as per the spec, and that was the pitch just about done.

An additional job was digging out the touchlines on the half where the linesmen run. Some linesman rotate touchlines but the majority tend to favour one half. With a mini digger we took out about 4 inches of the surface and replaced with about 4 tonnes of Mansfield fibre reinforcement into each touchline."

"The end of the season is obviously our busiest time as every one wants you to start on the same day. We like to hit a job hard. At this time of year we work 7 days a week. We want to get in and get the job done so the pitch can start rehabilitating and the Groundsman can get on with doing his work."

As Mike prepares his pitch for the new season ahead, few people will bet against Cheltenham being in contention for promotion 12 months from now. And even fewer people will be betting against Mike Heather being in line for another Groundsman of the Year Award.