0 Secondary Drainage - It never rains but it pours

Every UK turf manager will testify that, in the last decade, the weather has become more and more extreme. According to a recent R&A article, dramatic climate change poses major challenges to course managers and groundsmen who are under increasing pressure to deliver all-year-round playing surfaces for their members. Managers will testify that simply keeping their facility open during the wet winters is not enough. Customers expectation levels are continually rising, which is proving more and more stressful as the extreme conditions create an accumulation of problems to their facilities. As far as the climate is concerned, all we seem to hear about is record-breaking highs or lows and our golf clubs are facing immense difficulties coping with extremes of weather, the report concluded. Damaging weather not only hurts the golf course, it also impacts on the finances of the club as it can result in major repair bills and a loss of revenue during periods of course closure.

So, is there anything we can do to limit the damage and the ever-increasing risk when combatting the strongest forces of nature? Forward thinking managers have begun to draft up drainage systems to help reduce the risk of flooding, keep playing surfaces playable, keep their courses open and protect the organisation's income. Drainage schemes can be costly but, when faced with loss of revenue, are easily justified if properly planned and phased in a logical programme. Having a drainage vision and a believable path is the sensible way to go and helps to spread the cost over a few years, which will help the club's financiers allocate funds with less pain.

In most cases, a form of primary drainage system will be required dependent on the severity of the problem. A primary system consists of a network of lateral drains that carry water to a main drain, outfall or open ditches and away from the playing surface. Primary drainage systems also form the infrastructure for any subsequent secondary systems. It is also important that pipe outfalls going to course ditches are kept clear and form part of a manager's annual regime. There are many secondary drainage options available to turf managers. The key to success is to understand that surface water will generally not travel much more than ten metres, therefore, the closer the spacings the more effective the secondary system. To put it another way, the closer the secondary laterals, the quicker the movement away from the surface and the quicker it becomes playable. Secondary drainage should be installed perpendicular to piped drains. The proximity of permeable backfill to the surface can often dictate the most suitable type of secondary drainage, but also cost often plays a significant part.

Options for secondary drainage are not limited to these operations, but these are the most recognised solutions and possibilities:

Verti-draining and slitting: Both introduce air into the soil and open up the surface profile, but aren't necessarily creating a direct channel to transfer water from the surface to the drains. Good practice at the right time of year.

Mole plough: Crude but effective in the right soil type at the right time of year. Will quickly close-up with footfall and could crack open in drought conditions in heavier clay soils.

Earthquake, Shockwave, Groundbreaker: These linear decompaction units are crude but effective if slits held open with sand infill. Again, be careful of continuous slitting in heavier clay soils which will be prone to shrinkage in dry conditions. Gravel banding: Forced slits with a hollow blade and gravel gravity dropped into the created void up to 20mm wide and 250mm deep. This process is highly effective and can be installed with larger twin leg units or smaller more versatile single leg units. It's also possible to install lightweight aggregates such as Lytag or rubber crumb through these units later in the year when weight is an issue over wet surfaces. As there has been no soil exchange and the slit has been forced open, slits will seal up at surface level in time but are easily refreshed.

Sand banding: Forced slits with a hollow blade often combined with a decompaction unit like the GroundBreaker or Shockwave. Again, this is a hollow blade behind the decompaction unit and sand is delivered by gravity into the slits up to 18mm wide and 150mm deep. The sand needs to intersect using a similar particle sized sand at surface level over the primary drains.

Sand slitting: These are trenched slits and therefore soil is replaced. These are deeper and wider than the other methods and can be installed in a variety of depths and widths with single, double or triple wheel trenchers and included standard whizz wheel trenchers or multiple wheel trenchers such as the GKB DrainMaster. By nature of soil removal and replacement with gravel and sand or just straight sand, this form of secondary drainage is the most effective and longest lasting but is understandably more costly initially. 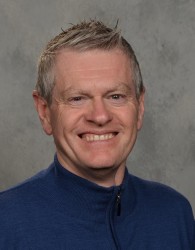 As with most fine turf environments, timing of drainage installation and re-instatement is critical and very much seasonal. Drainage solutions need to be planned well in advance. In winter, too much damage can be caused to fine turf areas when removing soil and replacing with imported material and can be highly destructive to surfaces. Alternatively, in dry conditions, shrinkage and cracking can occur, creating uneven settlement of imported materials which requires addition labour to make good. Turf recovery and seed germination relies on a mixture of favourable temperatures and moisture, therefore, if there is the facility to irrigate seed and/or turf over drain lines, perhaps consideration should be given to carrying out the works outside the traditional winter months.