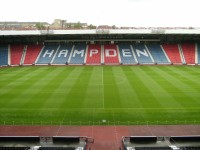 In 1903 the committee of amateur football club Queens Park clubbed together to purchase 33 acres of land on the South side of Glasgow upon which to build a football ground.

They went on to construct one of the World's most advanced stadiums, Hampden Park. More than a Century later and after several phases of redevelopment to update and upgrade its facilities, Scotland's national stadium is still just as impressive.

These days however, sports stadia have become multi-use venues and Hampden Park is no exception. Despite their Amateur status, Queens Park still play their League matches at the ground which also hosts the Scottish and League Cup Finals and the National team's home games. American Football was played at the ground too until recently.

The stadium's ampitheatre design and 52,000 capacity make it ideal for music concerts and it has played host to the likes of Robbie Williams, U2 and the Rolling Stones in recent years, adding new challenges to the preparation and maintenance of the playing surface for Head Groundsman Stephen Bache and his groundstaff.

"The biggest challenge for us is the very narrow windows where we can carry out renovations", Stephen explained. "This year we had a full three weeks, but that's the most we've ever had. We carried out some scarifying, hollow-coring and sand-slitting - as much as we could complete in the time-frame."

"I overseed monthly over the course of the season which helps me to maintain good grass coverage despite the intense match schedule. Last year I began to use A20 Ryesport seed mixture from British Seed Houses. Our Technical Advisor, Alistair Eccles visited the stadium and I appreciated the opportunity to speak to someone with extensive knowledge about seed. The cultivars in A20 have the characteristics we need - quick germination, fast recovery and good winter colour. Once the seed was down, we were extremely pleased with germination and take-up and I've noticed the difference in the recovery of the surface after the stress of matches and being covered for concerts." 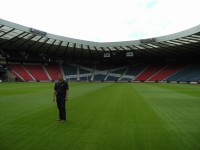 "This summer we hosted Neil Diamond on 5th June followed by Bon Jovi on 21st so the pitch was covered for a full 16 days. The staging was situated in the centre of the pitch for the first concert and then moved to the East goal area for the second. We find that the pitch fares pretty well under the Terraplas, it's the area under the staging that suffers the most. We apply a fungicide and lower the height of cut right down, but after more than two weeks of being covered, the grass is yellow and weak when it's lifted and needs time to recover."

"With A20, I've noticed that the surface recovers quicker than on previous occasions and fast recovery is critical for a pitch which is so heavily used."

A20 Ryesport is a blend of the four perennial ryegrasses Gallius, Lucius, Cadix and Vesuvius for all-round performance. It's used extensively on winter games pitches across the UK from parks to Premiership.