Cricket, that quintessentially English game that, quite frankly, the English national side aren't very good at; well, not the men at least! Every weekend thousands upon thousands of would-be Freddies and Harmies turn up at their respective clubs to do battle against their local rivals. They are generally met with a perfectly cut outfield, a nice new strip, boundary markers in place and a tea to die for!

Five or six hours later, and regardless of the result, the players head for the bar. In all that time, very few will have given a second thought to how much effort had gone in to preparing the ground, and it is doubtful that anyone will have noticed the lone figure scratching around on the square repairing the damage from the day. There is, after all, cricket banter to be had.

Fortunately, cricket, or to be more precise, a cricket club, gets into the soul of some members and it is these folk who work tirelessly behind the scenes to ensure its survival.

Eddie Giles, Head Groundsman at Stourport Cricket Club, a few miles south of Kidderminster, is one such person. He has served his club for over thirty years as a player, treasurer and, now, groundsman. He is one of a breed of volunteer groundsmen involved in grass roots cricket which, without his like, would be in terminal decline. Eddie takes up the story.

"I have been involved with Stouport Cricket Club for over thirty years. First as a player then, as my day job was in machinery repairs, I started tinkering with all the club's old machines, getting them into some sort of working order.

I got into groundsmanship by cutting the outfield twice a week. The square was maintained by my older brother so I had the easier job! I would take my two year old son with me and sit him between my legs on the tractor - within ten minutes he would be fast asleep.

Health & Safety would have a fit these days! As the years went by, and my family started to grow up, my father took over the cutting of the outfield and I took on the club captaincy but, all the time, still keeping the machines running.

When my son reached sixteen he took on the outfield cutting and my brother decided the time was right to call it a day - he had been doing it for twelve years - so I took it on.

Even though I had worked alonside my brother, I had no experience of actually preparing wickets, so I had quite a steep learning curve. I knew that the bounce was low and the top surface wasn't holding together, and was sure that this was not how it should be.

So, I phoned Roy Maclaren, the then Head Groundsman at Worcestershire County Cricket Club, for some advice. He was really helpful and came to take a look at the square. His core samples showed that there was a layer of thatch and a root break one inch down.

I spent the whole of that winter spiking the square, with a spiker I borrowed from a local club. I went on all the groundsmanship courses and joined the Worcestershire Association of Groundsmen (WAG). Roy chaired these meetings and we all found his extensive knowledge invaluable. Even though my square has improved I still keep asking questions and learning things at the WAG meetings.

As I got older I took on the treasurer's role at the club. Their policy is that they trust my judgement and, if money has to be spent to keep the ground in good order, the money is there. As I repair and maintain the equipment, I usually source used machines and overhaul them, so that the cost is kept down to a minimum.

On the main square we have thirteen senior strips and one junior. We also have a new netting area with two strips and a new artificial playing strip.


I had planned to extend the square by two strips at the end of last season but the weather, and a let down on delivery of loam, got in the way. The weather also got in the way of a number of our fixtures so, this winter, I built some roll on roll off covers.

When I took over the head groundsman's job, I set myself five years to try and get the square playing with true bounce and the top to stay together.

By asking questions of other groundsman, reading magazine and website articles I think I have achieved this. My plans now are to keep improving the ground.

Our end of season renovations used to be carried out by Dennis Jones of Kidderminster Cricket Club, a local stalwart who helped out many local clubs. Since he sadly passed away I have, for the past five years, been doing the job myself.

I used to borrow a SISIS Hydromain and seeder from Tom Langford at Ombersly Cricket Club and, in return, he would borrow my SISIS Scarifier. Tom has now retired and moved away so I have now bought a seeder and small tractor.

I cut the grass down, scarify the square in several directions, using the Graden off of the ECB trailer, and brush and clean using our SISIS Rotorake fitted with brushes.

The square is then watered, overseeded with Avoncrop ryegrass mixture (three passes) and topdressed with Banbury loam (3-4 bags a strip). All materials are bought in bulk through WAG to keep costs down.

The square is protected through the winter months with a temporary fence.

It is spiked three - four times between November and January using a solid tine vertical punch aerator along with an occasional roll with the sarrrel roller.

I aerate the outfield monthly when conditions allow (we are on the Severn flood plain) using a Sisis slit tine spiker.

I apply two bags of fertiliser to the square about every six weeks. I spray the square, and a large area around the square, with a worm and leatherjacket killer twice a year.

Do I get recognition for the work I do? In general, I would say yes. Of course, you will always get some who do not realise the work that goes into getting a good pitch to play on."

Eddie's story is not untypical of grass roots cricket clubs. The club has got into his soul.

He, along with other club members, are striving to get the club facilities up to ECB Club Mark status, which will release much-needed funding for further improvements.

The club run three senior sides and have a healthy youth membership of 120 who regularly train and play at the ground. They share their clubhouse with Stourport Rugby Club, and are currently putting together a joint bid to replace the clubhouse and changing room facilities.

The combination of Eddie's skills as an engineer, and the fact that he does all the work voluntarily, reduces the annual maintenance bill dramatically. With the club only ever having to pay for materials, hiring of the Graden from the ECB trailer (which is stored at the club) and the annual regrinding of the cylinder blades, the total cost comes to around £2000.

Over the years Eddie has acquired a fair amount of equipment, most of it second hand. He'll spends hours searching for a bargain and even recently travelled to London to buy a drop spreader that cost the club just five pounds - and his own wallet considerably more!

During the winter months Eddie likes nothing better than building or repairing machinery and equipment. Having completed his roll on roll off pitch covers he his contemplating the refurbishment of the score board. He even makes his own tines for the spiker! 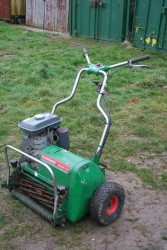 Pre-season rolling begins with an old Atco 36" mower that Eddie has adapted to carry additional ballast in the shape of three concrete blocks, gradually building up the weight. Then it's time to fire up the big Stothert & Pitt roller. That, in itself, is a work of art as Eddie is probably the only person in Worcestershire who has the nack of starting it! But, help is at hand as the club are busy raising £5,000 to put towards an ECB Grant to buy a newer roller.

The square is mown twice a week, to 12mm, with the Atco 30" mower, and the pitches are cut using an old Ransomes Greens Pro 20" mower.

Eddie does a ten-day pitch preparation routine and ensures the pitch is repaired after its last allotted game. He hopes to get at least four-five games from each prepared pitch.

Eddie is keen to continue in his role of groundsman and treasurer with the aim of seeing the new clubhouse built in the not too distant future.

The potential of the site, in terms of providing sport for the community, is outstanding for both the cricket and rugby club.

The rugby club are currently investing money to improve their first team pitch. They are employing a specialist contractor to resurface the pitch whilst, at the same time, increasing its size.

Rugby club chairman, Julian Fowler, agrees that it would be the making of the town to have a viable sports facility for the community of Stourport. The clubhouse will be the icing on the cake.

The final word goes to Eddie; "I am at the wrong age now to move on but, had I started doing this job twenty-five years ago, I think I would have liked to have made a career of it."

"My future plan is to keep fit and healthy so that, when I do retire from my day job, I can spend more time in the fresh air doing the job I love."