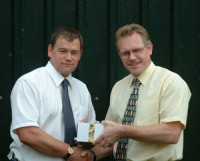 Joining in 1980 as an apprentice, with the then Atterton & Ellis, initially he was responsible for fitting and turning.

Next came university and, at the same time, he helped to construct the parts that would become Bernhard grinders.

From a position in assembly Tony rose through the ranks to his current role - where his core responsibilities include overseeing the stores. A recent major undertaking has been the complete overhaul of the store facilities.

Enjoying the opportunity given by the company to travel to exhibitions and shows, Tony counts his travels to the Grand Canyon in America as a very memorable highlight in his career.

Married with two young children, in his spare time he is highly enthusiastic as player/manager for the Clare Football Club.

Presenting a token of Bernhard's appreciation for his loyal service, Tony was wished a further successful 25 years in both grinders and football.

Photo: Tony Sheppard is presented with a gift by Peter Wood, General Manager of Bernhard and Company, in appreciation of his 25 years' loyal service.