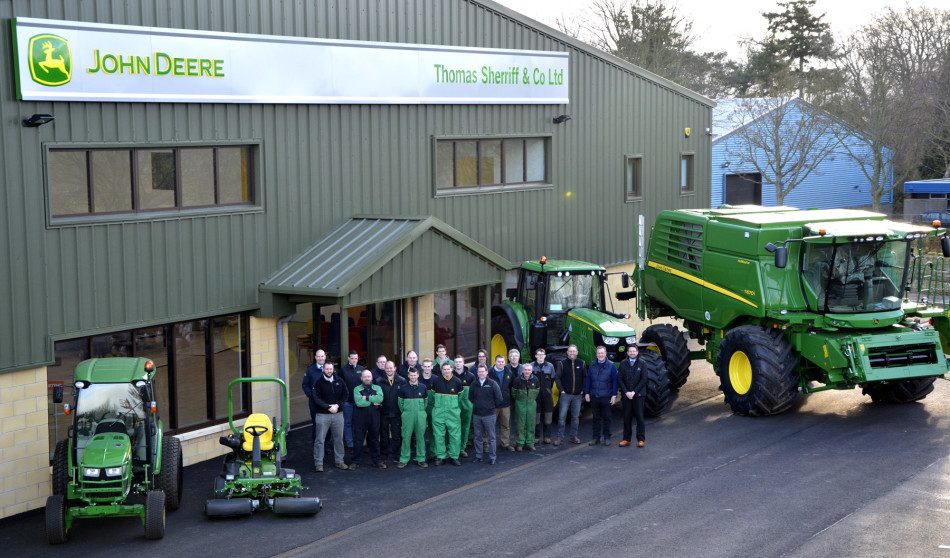 John Deere dealer Thomas Sherriff & Co, based at new premises in Haddington, East Lothian, has bought the business of W M Dodds at Jedburgh and set up a new outlet in Hexham to take over the territory previously managed by Everitt & Marshall.

These developments have extended the dealership's business area in the Lothians, Borders and Northumberland, with six outlets in total serving customers from the River Forth in Scotland down to Durham in the north-east of England, reaching out west to the Cumbrian border. The other existing outlets are based at Alnwick, Coldstream and Stow.

The majority of the W M Dodds employees have transferred to Sherriff Jedburgh, where Jimmy Laing remains as dealership manager. He has also been appointed to the Sherriff board and has taken on the role of after sales director.

Sherriff Hexham opened for business in November at Tyne Mills Industrial Estate, just off the A69 close to the town. The dealership team there is headed by Stewart Wheeler, who has 30-plus years of experience working in the area with John Deere products.

Meanwhile, the Sherriff premises at Tweedside Industrial Estate in Berwick upon Tweed were closed at the beginning of December, but with a full commitment to retaining all of the staff from that outlet. The Berwick technicians become field based, primarily controlled from the Coldstream office, where Eddie Stewart has taken on the role of service manager from Bill Wood, who now becomes the company warranty manager.

Finally, the new Sherriff head office site at Backburn in Haddington, which replaces the existing facility at West Barns in Dunbar, will allow both the dealership's agricultural and turf divisions to operate under the same roof for the first time. John Harrison becomes a home-based mobile technician and continues as the Dunbar customers' first point of contact for service.

"As part of our overall expansion and restructuring plans, the development at Sherriff Haddington has seen a significant investment of almost £2 million," says dealership managing director Colin Weatherhead. "This ensures that we can maintain the highest level of support to our customers in both the important business sectors of agricultural and professional turf equipment sales and service.

"We are also delighted to confirm that all our major suppliers, in addition to John Deere, fully support our expansion and plans for the new, extended trading area. We look forward to meeting customers old and new throughout the area over the coming months."