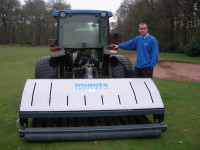 Dunham Forest Golf & Country Club is situated in the North West of England and gets more than its fair share of rain. Surface water is a problem that all greenkeepers face to lesser and greater degrees, depending on the location and design of the course.

For Course Manager Chris Gibson, controlling the effects of surface water on his 18-hole Championship course is an on-going difficulty which had been partially addressed with the recent installation of a pipe drainage scheme on a number of fairways as well as regular verti-draining. Unfortunately this has resulted in only limited success, with water still collecting between trench lines on the fairways and rough areas. A permanent solution was eventually found in the acquisition of the Imants Shockwave linear decompactor from Campey Turf Care Systems.

The Shockwave is designed to remove surface water and revitalise heavy wear areas. The PTO-driven rotary decompactor features a no-chains direct drive design, maintenance-free 'sealed for life' bearings and no shearbolts for easy maintenance. Working widths are from 1.55m to 2.2m with working depths of 120mm to 380mm, depending on the model and blades range from 18 at 12mm thickness to the 24 at 15mm on the heavy-duty Shockwave 220.

"Several other well-known clubs had recommended the Imants Shockwave, so we requested a demonstration," said Chris. "We completed four diagonal runs with 2.10m machine during an extremely wet June and were impressed with results." Despite further heavy rainfall, Chris and his staff observed that the treated area drained well and remained dry, with minimal impact on the playing surface so play could be resumed soon after treatment.

"We have used the Shockwave throughout the winter and it has surprised us with its ability to cope with the undulations on the course without leaving marks and with little surface disturbance generally," he continued. "It is also apparent that the Shockwave works in conjunction with the pipe drainage scheme. In my opinion it is the perfect surface drainage method to accompany existing sub-surface systems."

To arrange a demonstration, contact Campey Turf Care Systems on 01260 224568 or visit www.campeyturfcare.com for more information.