Only one football ground in the whole country has its nets on display at the National Football Museum. Neville Johnson looks at the relatively short history of a non-league club whose name is in the record books a number of times and whose groundsman, Jamie Honeyman, spends three hours each day travelling to and from a job he loves. 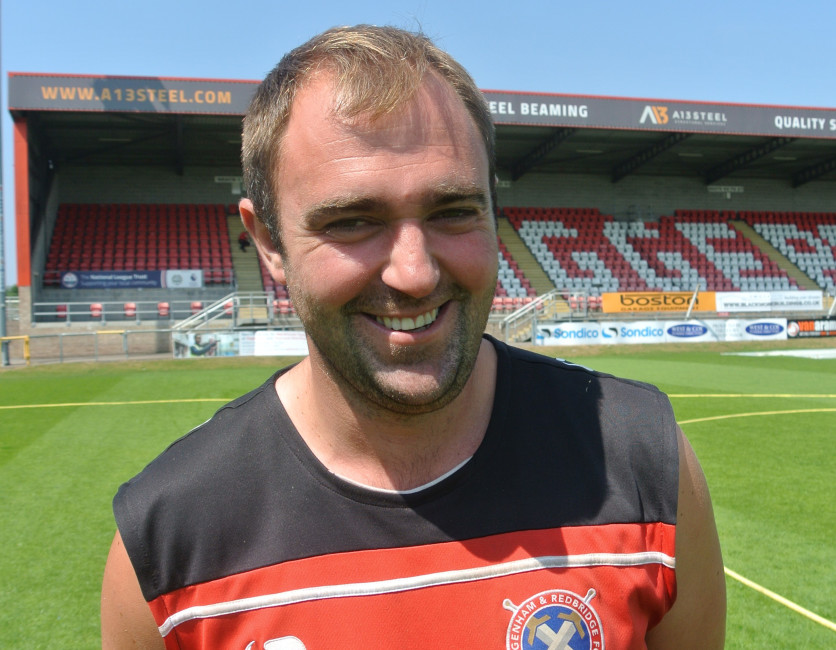 It's the hottest, driest summer since 1976. Groundsman at Dagenham and Redbridge FC's Chigwell Construction Stadium, Jamie Honeyman, has been here since 7.00am painstakingly moving his off-mains travelling sprinklers to see that the whole pitch area is well watered.

Despite the unhelpful conditions to a surface only just reseeded after end of season refurbishment, it looks immaculate and ready for the first pre-season action less than a fortnight away. It's a game against east London neighbours West Ham, which gives Jamie an added reason to impress because the Premiership club's head groundsman Dougie Robertson has been a big influence on his career.

Dougie and his team are always just a phone call away if he needs advice or help, he tells me, as he takes a break in the shade of the main stand at what was previously known as the Victoria Road Stadium. Its capacity is just over 6,000 with seating for 2,200 fans. There's room for expansion and that might come with on-the-field success.

Jamie came to the Vanarama National League club in January last year after spells as an apprentice at Fulham, then posts at AFC Wimbledon and as a senior groundsman at Barnet.

He actually started off as a greenkeeper, which he was for eleven years, with success in NVQ Level 2 in Sports Turf at Hadlow College whilst working at Bearsted Golf Club not far from his home in Kent.

He had always had an interest in football pitch upkeep though, and his switch four years ago is proving to be a good career move for him. Coming runner-up in the 2017 lower league Groundsman of the Year awards is a notable notch on his CV in such short time. Looking at the condition of the Victoria Road pitch it is easy to see why he caught the eye. 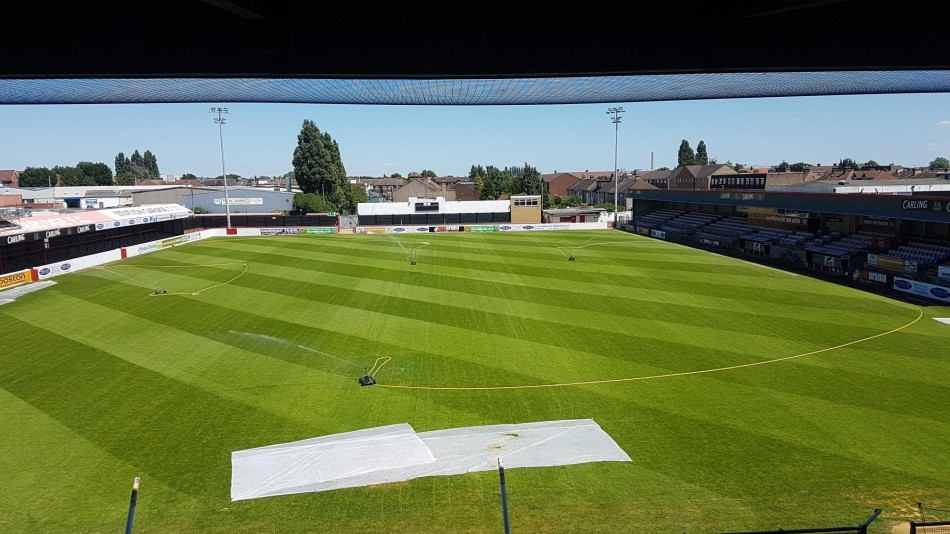 There may be a 'right club at the right time' thing going for Jamie Honeyman too. He's rightly ambitious, and the Daggers are determined to get back into the Football League where they feel they belong.

The appointment by the club of former England Under-21 coach Peter Taylor in June as its new manager has to be a huge indication of just how determined they are to achieve this. He has vast experience of Football League and non-league management, and even has a claim to full international leadership as stand-in coach to the England team in 2000 for a game against Italy, when he gave David Beckham his first taste of captaincy.

Dagenham and Redbridge is a relatively new club, coming first on to the scene in 1992 when the two individually named clubs merged in an effort to combat dwindling gates.

Football club history in the area goes back to 1861, and Redbridge was an amalgamation of Ilford, Leytonstone and Walthamstow Avenue, three of the biggest names in the amateur game. Seven FA Amateur Cups and twenty Isthmian League titles are just some of the spoils the two arms of the club could boast before they joined forces.

At the end of the 2006-2007 season, the club took the then Conference League title, putting it into the Football League for the first time. It maintained its Division Two status for two seasons and, at the end of its third at that level, a dramatic 3-2 play-off victory over Rotherham at Wembley saw it claim a place in Division One.

This proved to be a short-lived highpoint thus far for the club however, because a year later it was relegated back into Division Two, where it remained for five seasons until further relegation in 2016 took it down the fifth level of professional football in England, the National League. 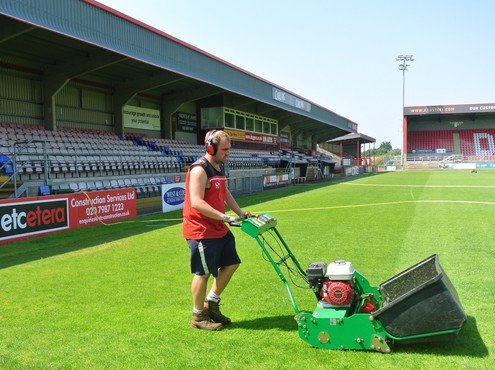 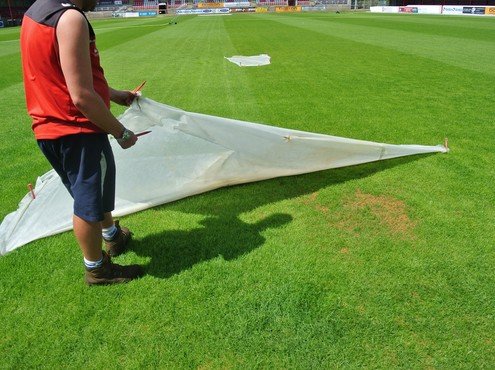 In recent times, the Dagenham and Redbridge club has notched up an impressive list of record statistics. It has had an uncanny habit of chalking up noteworthy scorelines.

Its 6-0 win over Morecambe in May 2010 is the highest first leg scoreline in the history of all Football League play-offs. It shares - with Brentford - the highest full-time League Cup score of 6-6 in August 2014. Unfortunately, the club lost the match to the Championship side after a penalty shoot-out, but this record tally is forever marked by having the goal nets used for the match on display at the National Football Museum in Manchester. Its 14-13 penalty shoot-out victory over Leyton Orient in a Football League Trophy tie in September 2011 tops, with a Liverpool-Middlesbrough League Cup tie in 2014, the number of consecutive successful penalties in professional football worldwide. Oh, and in October 2001, Tony Roberts was the first goalkeeper to score a goal from open play in the history of the FA Cup.

Quite a lot has happened in the club's short history and you sense it might just be on the rise again.

Jamie Honeyman's important task of keeping the Chigwell Construction Stadium playing surface in top condition and fit for the higher echelons is by and large a solo effort, though he does have a trainee assistant for a couple of days a week to help with main pitch duties.

As much as anything it's his daily travelling routine that is so admirable. It reads: drive from his home in Upchurch in Kent to Rainham station; catch a train - often as early as 5.15am - to Stratford International, then the DLR service to West Ham for a District Line train to Dagenham East, a 10-minute walk away from the ground. If all goes well it's about a 90-minute trip, and he has to do it all again in reverse each night to get home.

He loves what he does, and accepts that the travelling is a part of it. His plan, along with his fiancée, is to move nearer to London, to cut the time and cost of daily travelling. 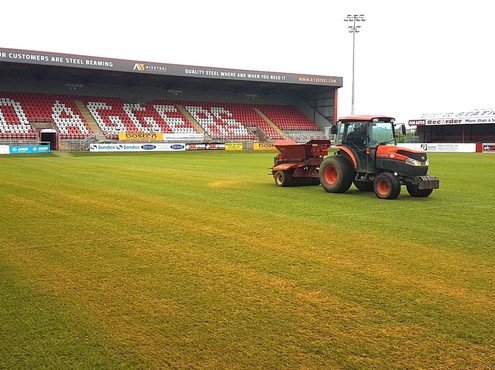 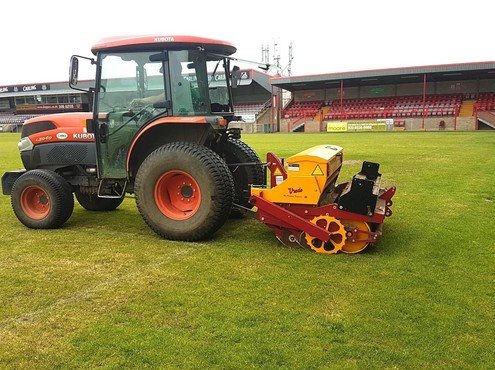 Close season renovation work on the stadium pitch, carried out by contractor Steve Tingley, began in late May with scarification, followed in early June by topdressing and levelling, and then drill seeding. A year ago, the surface was Koro'd, and Jamie says that it is an exercise that he will likely call upon every other summer.

The perennial ryegrass mix has taken well, and uniformly, though Jamie has used germination sheets for top-up seeding of the goalmouths. Cover here seems to be coming on well, too.

Repeat cutting at 32mm, using his Dennis G860, has produced a very impressive mid-summer surface. He will drop cutting height to 30mm or even 28mm as the playing season gets underway.

There's been a football pitch on the site since 1917 and the 112 by 72 yard playing area drains very well naturally, but even though the stadium stands are far from high-rise Jamie says that shade does cause problems as the days shorten. He does have to deal with a muddy surface along the south side touchline and for a few metres across the pitch in wet or cold conditions, and manages this more than adequately using his Sisis Quadraplay's slitter attachment. There is a strip of artificial turf the length of the pitch to combat assistant referee wear and tear. 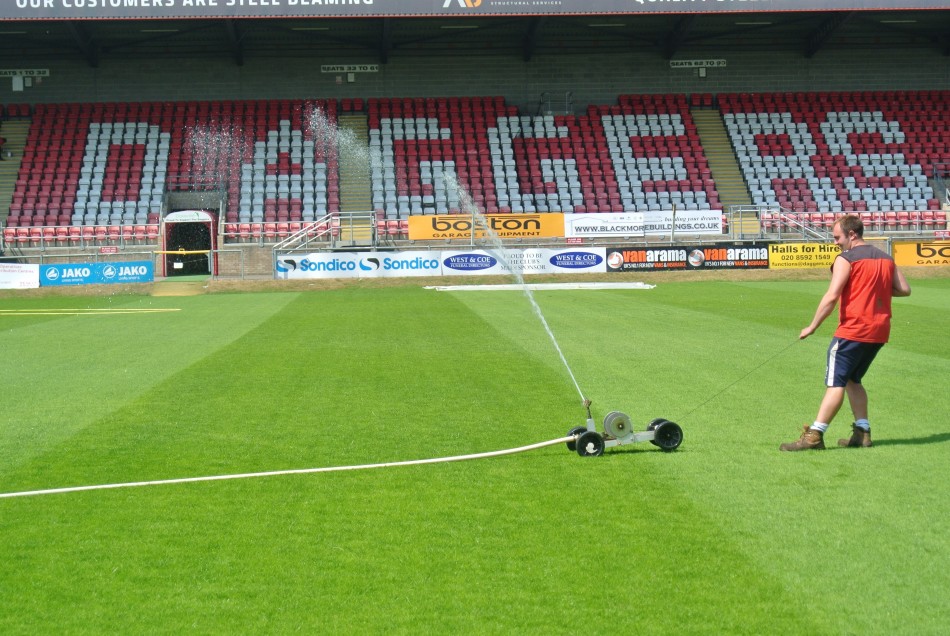 Jamie runs things with a modest budget, and, of course, limited manpower. The results speak volumes for his skill and dedication. Recognition for what he has achieved at the Victoria Road Ground by coming runner-up in the 2017 award was great for him, and great for the club.

He is generous in his thanks for those who have helped him along the way, particularly mentioning Greg Bolton, head groundsman at Fulham's Craven Cottage when he was an apprentice there, and going back to his greenkeeping days, Gary Williams at Bearsted Golf Club and Lee Sayers at the Mid-Kent Course, who taught him how to cut straight lines. This particular skill has helped him make Dagenham and Redbridge's pitch so consistently inviting.

It's the other kind of success, on the pitch - and in particular promotion back into the Football League - that Jamie hopes will help bring him a bigger pitch care armoury. Auto irrigation, grow lighting and a more intensive fertiliser programme are on his wish list, as is a Verti-Drain.

Maybe, if the new season brings in the points, and the Daggers can mount a promotion challenge, he will allow himself to start dreaming. He is ambitious professionally too, aiming to get NVQ Level 3 and a spray licence under his belt sometime soon.

Football has been on a special high all over England this summer, and Jamie is hoping Daggers' 2018-2019 season is a special one too. He couldn't wait for it to kick-off.