0 Shrewsbury School bowled over by Dennis 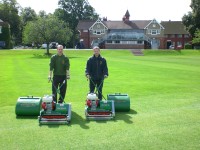 Sport plays a vital part in life at Shrewsbury School, an all boys boarding school in Shopshire's county town. Previous winners of the schools' FA trophy with their football team, cricket is also a major sporting interest, with pupils enjoying access to a new purpose-built indoor cricket centre.

Cricket writer Sir Neville Cardus describes the facilities as: "The most beautiful playing fields in the world, spreading and mingling with the pasture land of Shropshire."

The school fields up to 10 sides at all levels and age groups; the culmination of the 1st XI season is the Silk Trophy, competed for by Shrewsbury, Eton, Oundle and an overseas touring side at the end of each summer term.

Coaching is provided by teaching staff, the full time cricket professional, visiting English coaches, and a visiting Australian coach who spends his winter based at Shrewsbury.

Former students have been selected for major youth tournaments, including James Taylor who made the England U19 squad this winter.

Anthony Hough has been head groundsman at the school for the past five years, and in 2007 he began investigating new mowing systems for the cricket pitch.

"I previously used mowers which just cut the grass," he explains, "But wanted to try a machine which could do more."

The interchangeable cassettes on the Dennis FT510 fitted the bill, and Shrewsbury School now has two of the mowers, capable of brushing, verticutting and scarifying as well as cutting to a high standard. Adjustment, cleaning and maintenance is also made easier due to the removable cassettes.

Featuring fully variable drive to give the operator total control, the independent roller and cutter drive give a variable clip rate for the 51cm (20in) cut mower.

"We can now be more productive with our time and the overall finish is of a much better quality, so we are in a win-win situation!" Anthony says.

Having a convenient verticutter at his fingertips has enabled him to streamline pitch preparation as he explains: "When preparing a strip, you have to thin the grass out. We used to do this by hand, but now we just pop the verticutting attachment on the Dennis and away we go. It saves us so much time and gives a much better finish."

Anthony has found an extra task for the brush too: "We have three or four matches a week on one square, so the ground gets pretty dusty between matches. We don't have time to go through the whole process after every match so we use the brush attachment to get rid of the debris."

With a team of six groundsmen and four gardeners, Anthony was keen to have their input into the decision as they were going to be handling the mowers on a day to day basis, so the whole team was involved in the demonstration.

"We tried the Dennis mower alongside another on the market which also has the cassette system and Dennis definitely had the superior machine. The quality of the finish is superb," he says.

Since their purchase, the mowers have continued to find favour with the groundstaff at Shrewsbury School, as Anthony explains: "Another brilliant feature is the quietness of the FT510, it is lovely to use! The ergonomics are also very good - using the mowers a lot, they need to be comfortable. All of the guys operating them find them a pleasure to work with."

He concludes: "We have found Dennis to be an excellent brand of machinery, so we will be having a demonstration of a larger mower from the company this year for other grounds work."