by Editor
in Football and Industry News
on 20 Apr 2016

Maxwell Amenity's Richard Barnett and Managing Director Dave Saltman have been named as winners of the Football League, Sky Bet League One Groundsman of the Season Award for 2015/16 for their work at Shrewsbury Town Football Club.

Richard, who has worked at Shrewsbury for twelve years, has seen the benefits of a partnership with local company Maxwell Amenity dramatically improve the playing surface at the club's Greehous Meadow stadium. Richard had previously been employed by Shrewsbury Town but joined Maxwell Amenity as an employee in June 2015.

The partnership ensured the club undertook a pitch renovation with ALS Contracts and provided Shrewsbury Town access to Maxwell's product ranges and agronomic expertise, with Maxwell's MD Dave Saltman taking a personal interest in overseeing the work between both organisations.

The League One club's pitch was highly commended and received many plaudits for its appearance and performance during the Manchester United home FA Cup fixture on the 22nd of February. 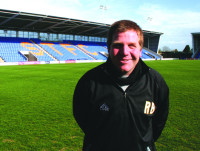 Richard puts the award down to the correct renovation, maintenance and agronomy programme.

"Following a PWS soil analysis at the end of last season, we worked with ALS to devise a tailored agronomy programme to give the pitch exactly what it needs. We have, in previous years, used a range of industry products, but the transformation of the pitch since using the Maxwell Amenity products has been outstanding. The surface is as good coming out of the winter as it was at the start of the season."

Brian Caldwell, Shrewsbury Town's CEO, has been impressed with the improvements to the playing surface.

"We are absolutely delighted that Dave, Richard and the team have won this award on behalf of the Football Club, there is no doubt the quality of the surface provided for the players on match day is second to none", said Brian.

"We have had compliments from all opposing teams throughout the season which reflects well not just on Maxwell Amenity but also Shrewsbury Town FC."

Dave Saltman, Managing Director of Maxwell Amenity Ltd, is proud that the pitch has come out top in League 1.

"In June last year we took on the contract for Shrewsbury Town's stadium and training pitches and embarked on a programme of nutrition and balanced biology to turn a poor stadium surface around", said Dave.

"In ten months, we now have a pitch that has responded well to our hard work and endeavour and to be nominated and then win this award is the icing on the cake."

"The award is great for my company (Maxwell Amenity Ltd) but also testament to the hard work and long hours that my contracts team, particularly Richard Barnett and Sam Ridgway have put in to get the surface to the quality that we all strive for."

"We would like to pass on our congratulations to winners, nominees and indeed all groundstaff who work so hard and apply a tremendous amount of knowledge and science to their role to achieve the excellent pitches we see footballers perform on today."

Throughout the season Dave documented much of the work undertaken at Shrewsbury and this can be read here in a series of detailed articles that appeared on Pitchcare.