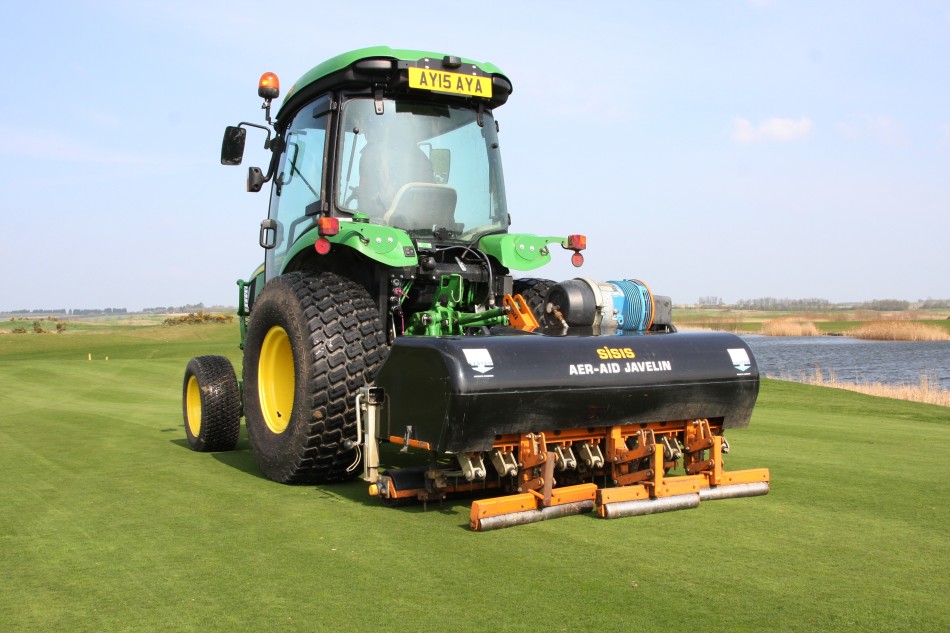 Rob Duff, course manager and head greenkeeper at St Ives (Hunts) Golf Course, has praised the SISIS Javelin Aer-Aid 1500 for helping him to combat a recurring thatch issue on the greens at the stunning course in Cambridgeshire.

With a history dating back to 1923, St Ives Golf Course entered a new and exciting era when it purchased a 230-acre site off the Needingworth Road in 2007. Transformation of the land began under the watchful eye of architect Cameron Sinclair and three years later St Ives boasted a stunning 18 hole Championship Links Course.

Featuring undulating fairways, strategically placed bunkers, excellent putting surfaces and sculptured surrounds; no two holes are the same and the course provides a test for golfers of all abilities. The club is making a bold statement, which includes taking an environmentally friendly approach to the way it maintains the course. Take for example the fact that they don't use any mains water - instead the water is totally recycled.

Tasked with keeping the course to its exceptionally high standards is Rob Duff who occupies the dual role of course manager and head greenkeeper. Having been part of the greenkeeping team at St Ives for a number of years, Rob was rewarded for his hard work when he was promoted to his current position in 2015. Upon landing the top position, Rob revealed his first management decision.

"We had a problem with thatch in our greens because of the nature of the grass. It consists of velvet bent, which is naturally thatch grass and in some places we had approximately 3 inches of thick thatch. Therefore I decided that an aggressive solution was needed and this is why I starting using the SISIS Aer-Aid."

The Javelin Aer-Aid machine is a specially designed tractor mounted vertical action aerator. Not only does it aerate with a vertical action but it also injects air into the root zone at a fast working rate, creating thousands of fissures. The cam trigger mechanism ensures that the air is always expelled at the bottom of the tine penetration, enabling treatment to be targeted precisely and consistently.

10mm diameter 'tipped' tines are spaced at 75mm (3ins) with depth of penetration, infinitely variable, to a maximum of 127mm (5ins). These air injection tines are specially designed to use the maximum air available from the compressor and produces clean, fresh, air at a constant rate of 88 litres per minute, while surface disturbance is kept to a minimum.

"To start with we used the Aer-Aid twice a month and now we normally use it monthly from March until the start of November. Since using the machine, we have significantly eased compaction and the main accomplishment has been the reduction in thatch from 3 inches to being practically non-existent.

"It's always going to be an on-going battle because of the grass on the greens, so it is important that we continue to use the Aer-Aid as a preventative. It has been really good at getting the air into the surface and creating chambers for the roots. Root development has massively improved since we've been using it on a regular basis as has the density of the sward.

"I've been impressed with its versatility; I can use it as a spiker, I can change the depths of the tines, I can use solid tines or pencil tines, I can hollow core with it and I can inject air into the profile. It can do pretty much whatever you want it to do.

"It's a very robust machine, as all SISIS products are, and the back-up I receive is excellent. A quality product combined with first-class back-up is all you can ask for."