Clive Brown, a volunteer groundsman, has praised the SISIS Auto Rotorake Mk. 5 after it helped him pick up an award for the best ground in the Lincolnshire Cricket Premier League. 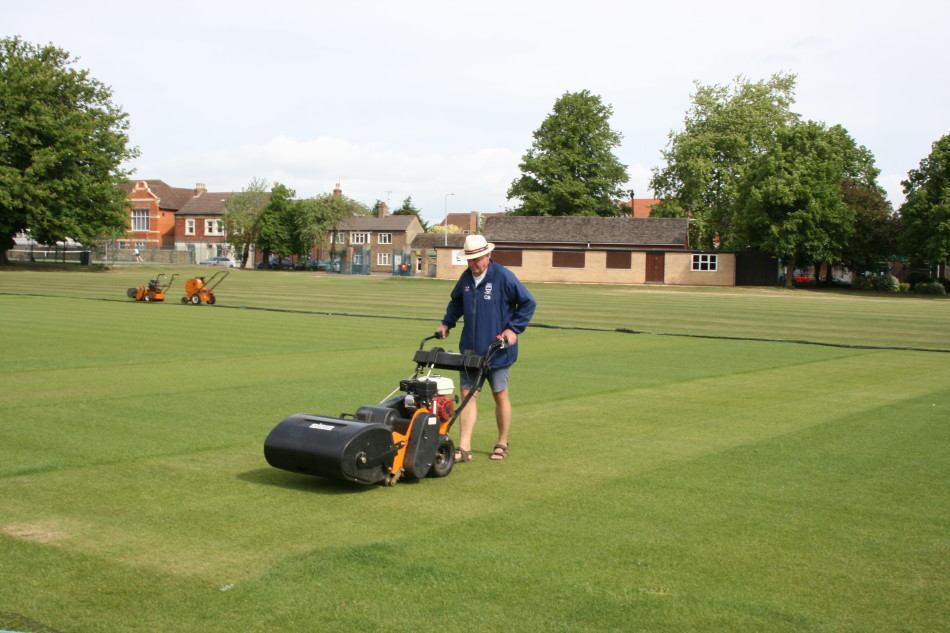 "In terms of loyalty, I like to think that I'm old school," said Clive. "It has always been Bourne for me - I've never wanted to play for anyone else and we've been through thick and thin together."

Clive started playing for his beloved Bourne Cricket Club, who play their cricket on the Abbey Lawn, when he was just 12 years old and continued do so until the age of 41. During his playing career Clive supported the club by becoming a committee member and he also managed / maintained the square for four years. However, when he retired from employment Clive wanted to further extend his support for the club.

It was at this point that he returned to the club and took on the grounds maintenance role once again. He now spends approximately 30 hours a week at the ground and receives help from his assistant Ian Greenfield. The two of them have been working tirelessly on the square for the past five years and were recently rewarded for their hard work.

"When I took on the grounds maintenance role, I set myself a target of achieving the best ground in the Lincolnshire Premier League - which is judged by the umpires. They have a set criteria to follow in terms of the pace, / bounce and other factors which determines its overall playability.

"In my first year we ended up finishing fourth and then gradually we climbed higher each year. In 2018 we were runners up and last year I'm pleased to say that we won it.

"It was extremely rewarding for both of us to be honest."

After previously using a SISIS Auto Rotorake Mk.4, Clive upgraded to a Mk.5 and claims that it has played an integral role in helping him to keep the square in an incredible condition all year round.

"I needed a machine that could assist with our heavy work load and because the Mk.4 was over 20 years old and as you can imagine, any machinery that old will of course lose some power. We did look at a wide range of machinery, but I was quite keen to stick with SISIS because the Mk.4 served us so well - it was incredibly reliable and did a great job every time.

"My mind was made up after speaking to Keith Exton (former Head Groundsman of Glamorgan CCC) who highly recommended it."

The SISIS Auto Rotorake Mk.5 is a powerful self-propelled heavy duty scarifier designed for the removal and control of thatch on fine turf. It features a contra-rotating reel with specially designed tipped blades for a clean, consistent cut and maximum thatch removal. A variety of maintenance tasks can also be carried out due to a selection of seven different interchangeable reels.

Clive purchased the verticutting reel, the scarifying reel, and the brush to accompany his Auto Rotorake Mk.5 and believes that it covers all bases.

"These three reels give us a good chance to maintain the square in the conditions that we expect during a season," he said. "We normally start using it in February and continue to use it regularly throughout the year. It is great at cleaning out any build-up of thatch and the brush will be used prior to cutting, scarifying or verticutting.

"I will also use it to create the seed drill for when I am seeding.

"Since I have had the Mk.5, I've been absolutely delighted with it. It delivers exactly what I want, it is comfortable to use and has plenty of power to undertake any of our key maintenance tasks."