An advocate of both natural and synthetic maintenance equipment from SISIS, AIan has held a strong relationship with the company since his time as head groundsman at Ipswich Football Club. 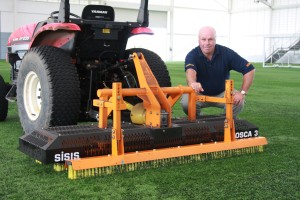 "I acted on the recent FIFA synthetic surface maintenance trial reports, where the Osca performed very well," said Alan. I wasn't surprised as I used one at Ipswich and it performs really well. Ball roll is a difficult parameter to keep in check and the Osca's oscillating brushing action brings something different to our maintenance programme and it's something that actually makes a real difference."

Synthetic sports surfaces require a good maintenance programme in place from the start. Failure to regularly remove dirt, leaf debris and other detritus from the surface can lead to contamination of the infill. The Desso I-DNA synthetic pitches at St George's Park were installed to the FIFA 2 star standard. Alan says that it's important to maintain them to a high standard with the level of use they receive on a weekly basis.

"With the level of activity on our pitches from both a tournament and also community use, it's imperative that our synthetic surfaces are maintained on a regular basis and to a high standard. The Osca has been added to our extensive range of maintenance equipment and we use it weekly. The key is going slowly enough to allow for a deep penetration, rather than trying to rush the process, which disperses the infill evenly, preventing excess material being left on the surface whilst reducing compaction."

The Osca has a 1.8 meter working width which, when in operation, the two oscillating brushes stand the carpet fibres up and redistributes the infill evenly, minimising compaction on the surface and improving its performance - giving consistent playing characteristics whilst preventing pile damage caused by reduced infill levels. To complement the final result an additional brush can be fitted to the rear of the unit.

Used regularly it will keep the infill mobile, preventing surface compaction and loss of porosity. A contributory factor to the reduction of compaction is that the Osca's working width will use few passes than other more conventional drag brushes to complete a pitch. Its aggressive brushing action agitates the upper infill level of the surface from side to side as well as brushing forward, helping reduce surface compaction and encourage the fibres to stand up straight which reduces the risk of contamination, drainage problems and leaves a consistent playing surface across the whole pitch.

Alan sees synthetic pitch maintenance as just as important as maintenance on natural turf and feels the amount of maintenance required is vastly underestimated to keep a pitch in tip top condition. "I think it goes back to its introduction. I see synthetic turf as no threat. With the advances in both the turf itself and the maintenance equipment over the past ten years, it's easy to say they are here to stay. We spend as much time maintaining our synthetic pitches as we do our natural ones. I believe we have the capability to produce as good synthetic surfaces as we do natural grass ones. Success will come as a result of good procurement of equipment and using it correctly. I personally believe our success at St George's is down to working with the Osca and its brushes - each one working to compliment the other.

"There is no other machine like the Osca, which sets it apart and makes it that little bit special. It's allowed us to keep ball roll below ten meters which let me tell you isn't easy when you consider we have around 40 hours of use on our synthetic pitches each week. I can't recommend the Osca highly enough and would be happy to show anyone how we use ours to great effect."

A storage frame is supplied as standard. Twin implement extension arms are available as an option enabling any 1.8M implements from the mounted frame options to be used.