by Lucy Nicholls
in Machinery & Mechanics, Aeration, and Bowls
on 26 Apr 2021

0 SISIS Supaturfman to the rescue at Maldon

Greenkeeper Mark Piper claims that the SISIS Supaturfman has made a remarkable difference to the green at Maldon Bowling Club in Essex. 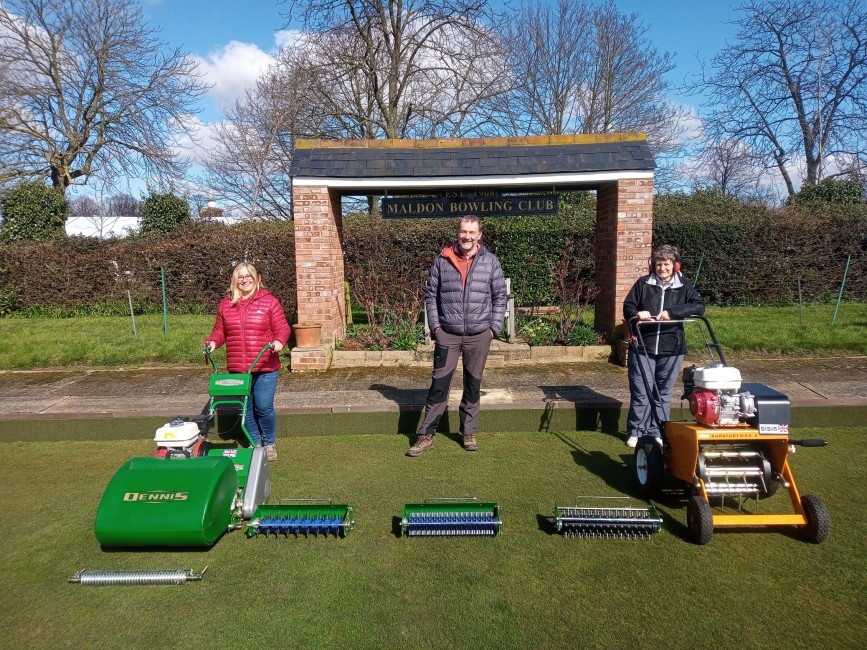 Maldon, one of the most respectable bowling clubs in Essex, was founded in 1908.

Historically, the green itself was maintained by the local Council for several years, but it is now looked after by a small group of dedicated club members. It was the right decision according to Mark Piper, the greenkeeper who oversees the team of volunteers.

"It was time for us to start caring for the green because it was suffering," said Mark. "Unfortunately, the Council couldn't dedicate enough time and it was affecting the playability of the green. As a club we came to this decision and not only has it made sense financially, but it has also improved the quality of the green."

Mark took on the responsibility at the start of the year and identified which task required immediate attention.

"The green was suffering quite badly from moss," he said. "This was because it was receiving no aeration at all throughout the winter."

After researching various aeration machines, Mark came across the SISIS Supaturfman and decided to call the company after being suitably impressed.

"I really liked the sound of the machine, but I wasn't too sure if we could afford it. After speaking to Dennis and SISIS, they pointed us in the correct direction so we could obtain a funding package. I was obviously delighted, and it was part of an exceptionally good service from Dennis and SISIS."

Mark received the necessary funding from SUEZ Communities Trust, which enabled him to purchase the SISIS Supaturfman. This independently powered heavy-duty aerator is ideal for the maintenance of bowling greens. Just as Mark recognised, aeration is important for improving drainage, reducing turf compacting, thatch build up and for generally increasing the health of lawns.

Furthermore, it has a maximum working depth of 10cm (4 inches) and a choice of interchangeable tines to provide excellent lawn care when aeration is needed.

"In just a short amount of time, the Supaturfman has made a huge difference to the green," said Mark. "It is extremely easy to use, and will be used throughout the season for aeration. When I attach the slitter - not only is it quicker than tining, but it also provides aeration with the added benefit of keeping the Poa Annua down - which we normally get a lot of in spring. I would say that I use the machine a couple of times a month, alternating between the solid tines and the slitter every two weeks.

"As the season approaches, I am planning on using the pencil tines once a month and we also bought the hollow tines should we need to do coring in the autumn."

For those all-important autumn renovations, Mark also purchased the SISIS Truspred - a versatile hand operated spreader and top dresser for the accurate, even application of grass seed or top-dressing material.

With his new SISIS equipment, Mark now feels that the green is currently in its best ever condition.

"All of the members can see the difference already," he said. "I'm looking forward to using the Supaturfman for the autumn renovations and keeping the green aerated over winter - I am confident that this will raise the standards of the green even more."