by Siân Workman
in Industry News, Pitchcare News, and People
on 12 Feb 2017 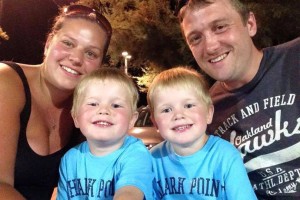 Zack Barrett is a five year old twin boy who has been diagnosed with a rare, aggressive form of brain tumour known as 'Diffuse Pontine Glioma'. When Zack was diagnosed, the family were told that he only had months to live without treatment, and possibly 18 months with radiotherapy.

Initially, the family wanted to raise money to create happy memories, so they could make the most of the time they have left together.

However, now Zack's family are looking into different treatments and trials. Unfortunately, these trials are very expensive. So we are appealing to everyone to help in any way they can big or small as these treatments will be in excess of £100,000 and could be much more.

You may be wondering why we are getting involved. Zack's grandfather, Jason Wood, is a former groundsman and a friend to our managing director Dave Saltman and, as any parent would be, Dave was keen to get involved. 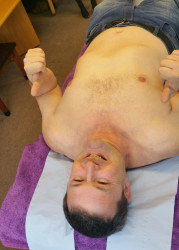 So we arranged a 'Wax-Off for Zack' with six 'willing' volunteers, including Dave.

Waxing took place on Thursday 9th February with lots of promotion on both Twitter and Facebook, both before and after the event.

Our six nervous, volunteers stepped up to offer either their chest or legs to be waxed. We collected donations on our Just Giving page and extra funds were raised on the door from spectators willing to pay to view the pain. Our Customer Services Assistant Nicky, a previously trained beautician, offered up her skills to conduct the waxing throughout the day - a tiring and entertaining task to say the least.

Our first (and possibly hairiest!) volunteer was Jamie Harvey. Despite the removal of his chest rug he stayed upbeat throughout, making Nicky laugh and barely flinching at all, noting that the collar bone was the most sensitive. A little bit of blood, a lot of red skin and over an hour later Jamie was able to see his tattoos properly for the first time in a while! After enduring the taunting from his warehouse colleagues he was keen to get back to his bacon sandwich and to work.

Our second and youngest volunteer was Trade Store Assistant, Daniel McDougall. A good even coverage of leg hair was quickly removed with exceptionally unusual noises from Danny - noises that Nicky struggled to keep a straight face through. He provided much entertainment for the spectators from our Sales and Accounting departments and some hilarious video content for our Social Media accounts!

Maxwell Amenity Managing Director Dave Saltman took his volunteering very seriously. The little chest hair he had was holding on for dear life, but Nicky persevered and, with no reaction or acknowledgment of pain, Dave was finished within half hour. He did, however, hang around to torture Regional Technical Sales Manager Ian Somerville, who was up next.

Ian was our fourth volunteer of the day, arriving with plasters to protect his modesty - and his nipples! He really tested Nicky's skills with his constant fidgeting and yelps of pain, but soon had the smooth torso he signed up for. Nicky found a new assistant in Dave Saltman, who more than relished his chance to get involved and giggled his way through pulling strips off Ian's stomach.

Our fifth volunteer - or, in this case, we will call him our victim - was Sales & Marketing Director Dan Hughes. Dan was certainly hairier than most expected, with a thick sward of chest hair that was a particular challenge for Nicky. After several failed attempts to separate Dan from his follicular forest, and an emergency run for more industrial wax later, the torture began. Possibly the toughest one of the day, Dan powered through the pain and the blood to leave with a smooth torso, ready for his upcoming holiday tanning.

Last but not least, we had Senior Sales Coordinator Ed Smith. Notoriously laid back and polite, Ed surprised the waxing staff with a list of softly spoken profanities and subsequent apologies. His elephant shaped chest hair coverage took only half an hour to get rid of leaving him ready and primed for any men's fitness photo shoots that may be in his future (apply within).

Modesty, and 'grown men crying' only allows us to post a small selection of pictures

A long day of hairy wax strips, belly button spillage and pink skin resulted in six silky smooth men, over £600 in donations, a lot of laughs and, most importantly, a bit more hope for Zack and his family.

There is still time to donate whatever you are able to spare: https://www.justgiving.com/crowdfunding/wax-off-for-zack