The US authorities have charged 16 additional Fifa officials with fraud and money laundering offences, bringing the total number of individuals and entities charged to date up to 41 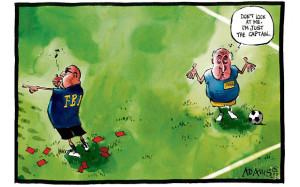 Washington's Department of Justice (DoJ) released the names of the officials - all from the CONCACAF and CONMEBOL confederations - following the arrest of their respective presidents Alfredo Hawit and Juan Angel Napout yesterday morning (3 December).

They make up part of the 27 indicted defendants alleged to have "engaged in a number of schemes designed to solicit and receive well over US$200m (£132m, €184m) in bribes and kickbacks".

Fifa said it was would "fully co-operate" with the authorities through their investigations.

According to the DoJ, the new charges brings the total number of individuals and entities charged up to 41 since the investigation was opened in May, with 12 individuals and two sports marketing companies agreeing to pay US$190m (£126m, €175m) in forfeiture after being convicted.

The "superseding 92-count" indictment, including those of the 16 new defendants, allege "various criminal activities including fraud, bribery and money laundering" from 1991 through to the present day.

The new allegations refer specifically to a series of bribery schemes in connection with Fifa World Cup Qualifiers and international friendly matches involving six Central American member associations; a bribery scheme relating to the sale of broadcasting rights to the Copa Libertadores; and a scheme by an Argentine sports marketing company to obtain various rights by paying bribes to three Central American football officials.

In addition, the DoJ revealed that eight of the defendants had pleaded guilty, agreeing to forfeit more than US$40m (£26m, €37m).

Attorney general Lynch said the DoJ was "committed to ending the rampant corruption we have alleged amidst the leadership of international soccer".

"The message from this announcement should be clear to every culpable individual who remains in the shadows, hoping to evade our investigation: You will not wait us out. You will not escape our focus," she added.

For the orginal article, visit sportsmanagement.co.uk.