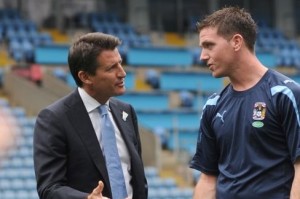 The decision of Coventry City's award-winning groundsman John Ledwidge to leave the club and become an Arena Coventry Limited employee has added an intriguing new twist to the war between the Sky Blues and their landlords.

Ledwidge has insisted it's an amicable development, saying: "As a City fan I just want to say how amazing it has been to work for the club I support. I've worked with some amazing people and I leave a fantastic team dedicated to doing a first class job for the club."

But the obvious question that arises is why do ACL require a full-time groundsman when, if the Sky Blues stick to their threat to move out, nobody will be playing on pitch for the next three years?

ACL spokesman said: "We're really pleased that John has agreed to join us. He's already worked alongside us for several years so this was a natural move for both John and the ACL team.

"The pitch is a key asset and feature of the Ricoh Arena and we have set money aside to ensure it is in prime condition come the start of the football season in August.

"When that time arrives we hope very much that the Sky Blues will be playing on the turf John's going to be in charge of maintaining in the weeks and months ahead, here at their rightful home at the Ricoh Arena in the City of Coventry."

Ledwidge, who cut his teeth as a schoolboy at Highfield Road and the club's Ryton training ground, spent three years at Aston Villa before being appointed as City's head groundsman four years ago.

See the rest of the article on the following link:-Coventry Telegraph