0 Slittin’ on the dock of the bay

Annually, Glamorgan County Cricket Club head to the tourist-heavy northern shore of Wales and hang their hats at grassroots club Colwyn Bay. This year, they made the trip for a Specsavers County Championship match against Sussex with an unusual result; a quick finish with just one wicket separating the teams. And this remains possible thanks to persistent but low-tech aeration. 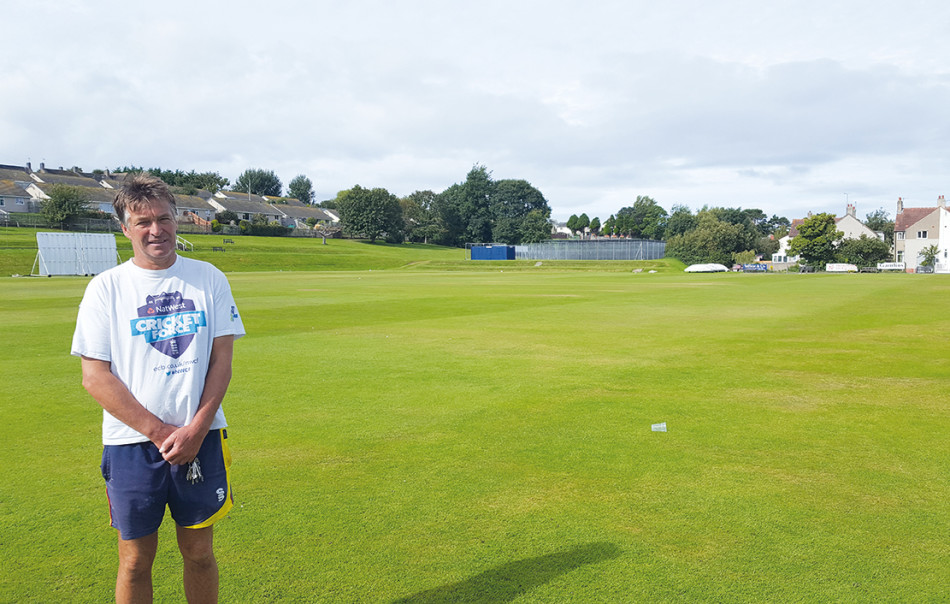 The Glamorgan vs Sussex match had as many ups and downs as the mountains surrounding Colwyn Bay, and both first innings had ended abruptly.

But, if a cricketer's basest desire is to win, the teams proved desirous. As with every international match of late, a draw felt unlikely from day one.

At times, Sussex looked a class above, but this was interspersed with sparkles from a gutsy bunch of Glamorgan youngsters.

As the match ebbed and flowed, it soon became clear that it was not going to peter out into a draw, especially as the 'home' side had only scored 182 in their second innings, setting Sussex 209 to win ... and the match was only in the third day.

Runs on the board, as the old adage goes, found Sussex losing wickets in clusters and, at 179-9, the game was surely Glamorgan's. However, twenty-three year old all-rounder Ollie Robinson guided the tail close to the target, before a flurry of runs at the end saw the visitors over the line.

The square was marked 'very good' by the pitch liaison officer before the match, and positive reports were received from the players too. 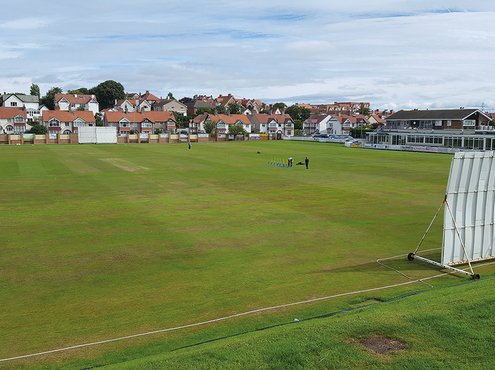 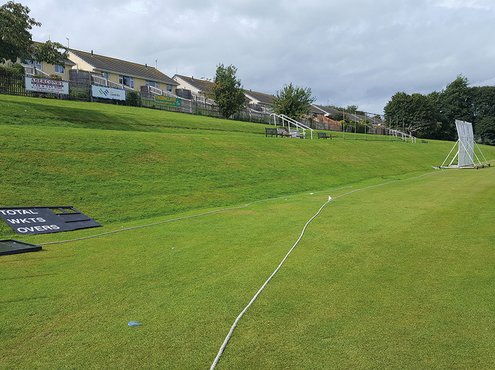 It was the location of the county's first ever individual triple-hundred in 2000, made by Steve James - against Sussex. This innings also resulted in Glamorgan highest team first class total, 718-3.

Colwyn was also the finishing location for Glamorgan's successful 2004 Pro40 campaign, then known as the 'Totesport League'.

It is the furthest afield of Glamorgan's so-called home grounds, being 180 miles from their SSE SWALEC base of operations in Cardiff. The irony of that Pro40 win was that the losing team, Lancashire, had travelled a shorter distance than the home side.

This year, the crowd averaged a little over 1,000 per day for the three days it lasted, although Glamorgan receive the proceeds from ticket sales.

Robin Sexton, a groundsman from Glamorgan travels to Colwyn a couple of weeks before the event to help the preparations of Colwyn's Grounds Manager/Bar Manager David (Dave) Wallace, 57.

His groundcare background spans sixteen years, many portions of which were spent with Bangor and Conwy Cricket Clubs on a part-time voluntary basis.

After a while, a vacancy arose to take it up as a career with Colwyn, and he jumped at the opportunity. A staff restructuring around eighteen months ago resulted in his position becoming a hybrid between grounds and management.

Of Glamorgan's decision to use the pitch, he said: "This, as an outground, is not officially a home of Glamorgan's as such."

"However, they portray themselves as, and are seen as, the 'county of Wales'. So, it's important for them to play in the north."

"In previous years, they would have four, five, or even six outgrounds. Now they only play home matches at the SWALEC, Swansea, and here. So, it's more important than ever that they maintain one in the north."

During the summer, his role reverts to its old patterns and he describes the grounds work then as full-time. Robin's work in the days leading up to the county match relieves this responsibility somewhat, but Dave ensures its readiness for his arrival. 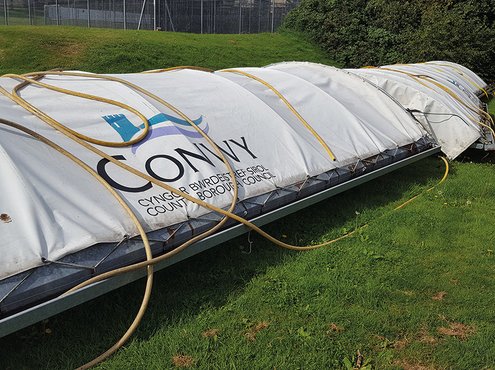 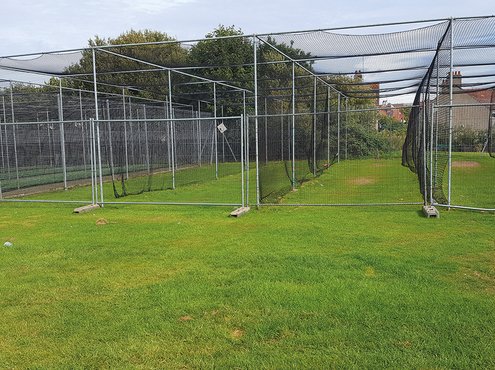 In mid-autumn, an external contractor renovates, and his grounds responsibilities after that will mainly consist of rolling, spiking and feeding whilst the turf lies in wait for the new season. During this time, he can focus on his other role.

In summer, for local matches, i.e. those involving Colwyn Bay Cricket Club's XIs, the outfield is 12mm with a 6-8mm pitch, all cut with a Paladin hand mower.

Aeration is mainly a spiking job throughout the finer seasons too, and they also own a Dennis Verti-cutter to take care of healthy tillering and thatch levels.

He overseeds just after the renovation and, if any patches refuse to cooperate, he reseeds in November, with the assistance of germination sheets.

His seed of choice is Limagrain MM50, whilst for loam he uses Binder's Ongar.

A foot below the turf is blue clay, but between there and the pitch dressing is silty soil. The square suffered from a layering problem, but this is diminishing.

This is the case with regular aeration and the introduction of a perforated drainage system over wood chippings and pea gravel, which is based simply on the renovation of an old, foot-wide clay pipe system, to which they added a new outlet near the scorebox.

The River Conwy previously had a tributary which flowed across the ground currently occupied by the club, as well as a nearby golf course, and the entire adjoining town of Rhos-on-Sea.

For years, the river bed troubled the basements and low-lying rooms in the area's houses with damp. This has only been aided by the passage of time.

The drainage at the cricket club has steadily improved over the years too, to the point where the pitch now drains relatively efficiently for a clay-based surface - with most of the thanks surely going to Dave and his predecessors, and their tenacious spiking and slitting regimes. 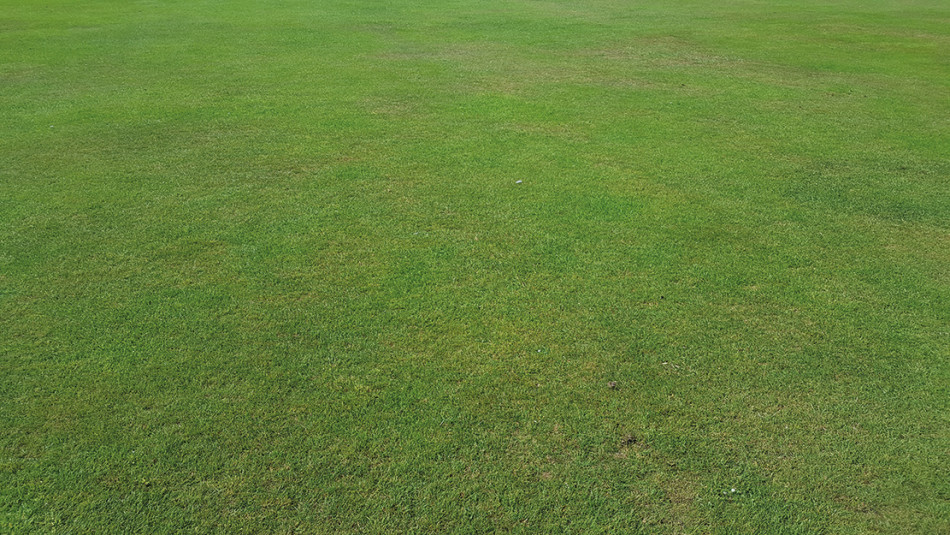 He doesn't perform any sort of core aeration, or anything that is designed to cause a major disturbance, because a grassroots budget won't allow for such machines.

However, the old ways have worked for him, given enough time and effort. It goes to prove that, even though compaction can be resilient - no matter what's done to counteract it - traditional methods used aggressively can be effective when this isn't an issue.

The ground still floods perhaps once per winter, but this tends to be several months before the season, so although extremely heavy rains to which Wales is prone can prove problematic, this is no longer the case when the red ball time of year comes around.

When asked about pests and diseases, Dave simply said: "Kids."

"I know what you mean really. Leatherjackets occasionally. We had to treat for them just the once, and foxes have been here in the past, but they seem to have taken care of themselves."

"We also sometimes get wading birds, which can be a bit of an issue. But that balances itself out, because their long beaks quite help us out."

"We also get some red thread in the winter. Whenever that arrives, I immediately give it a feed, because that's like the grass telling me that's what it needs."

The bar and the hospitality sales are the backbone of the club's business, and it supports the continuing grounds work and facilitation of cricket matches.

As well as taking the money from ticket sales, Glamorgan don't pay rent to the facility. However, the plan is run as a three-way joint venture with the two clubs and Conwy County Council, who do help Colwyn out financially on top of their food and drinks sales.

The pitch is handily bordered on the southern edge by a two-tiered bank, upon which Stephen Walburn, 68, the dedicated Secretary, laid out 750 patio chairs in time for the Glamorgan fixture.

Stephen told us: "We had to completely rebuild the boundary wall, because it was levelled by gale-force winds in the winter of 2014-15."

"That cost us about £40,000, which was a heck of a chunk out of our reserves. And I made some wooden panelling that lines the walls for the length of the field. That took me a few months."

"We're also planning to refurbish our nets area. We got assistance from the ECB and local authority originally, but we need to replace it ourselves. We've got four grass lanes and three artificial."

"We have 800-odd members, and the life members are granted via length of service and age. We're also hoping to get another scoreboard at some point within the next five years." 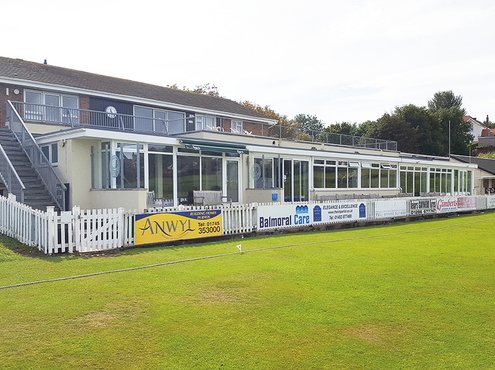 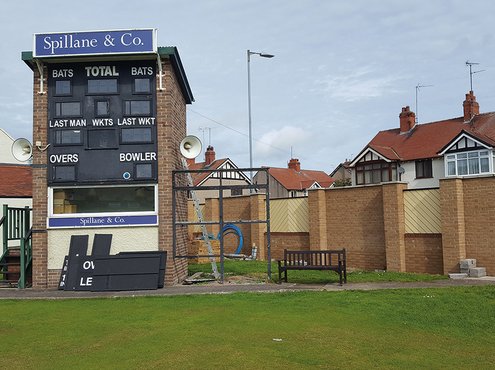 Upon walking around the entrance to the clubhouse, one comes across walls covered in dates and facts about the club's history. Some of them read as follows:

The pavilion was built in 1960, and was extended in May 1996. At some point, the old pavilion was converted into a hospitality suite, and houses the club's secondary bar.

The electronic scoreboard was installed in 1992, and the scorebox itself was donated to the club by Reginald Boase, a local timber merchant, forty years earlier in July 1952.

On the 5th-6th July 1984, the club hosted a two-day match involving the West Indies 1st XI, and, between 13th-15th July 2008, held the second Test of the deaf cricketers' Ashes series.

They also denote that the club won the Abercolwyn branch of the Campaign for Real Ale's Club of the Year award for three years running 2009-2011 (although this is an award for their ability to drink, rather than to fine turf).

Through another door from the entrance hall is a large snooker room holding two tables. Upstairs consists of the two dressing rooms and an umpires room, all of which open out onto the pavilion terrace overlooking the pitch.

As we conducted our interviews with the staff at Colwyn, ever-present was a 77-year-old man called Bill Lloyd, who claimed to have been a member of the club for "101 years".

In 1977, Bill made club history and earned himself a long-standing commemorative wall-hanging in the clubhouse by taking all ten wickets in a match for Colwyn, at a cost of only 93 runs.

With a vocal tone treading a fine line between sarcasm and pride, Bill said: "I wasn't a quicky or a spinny. I was a medium-pacer. They were scared of me. I could swing it around corners."

The chief mascot at the ground is not club legend Bill, but Dave's black and white cat. It wanders onto the pitch because its house, and therefore groundsman Dave's, adjoins the western edge by the scorebox.

She was, during Pitchcare's visit, the only pest on the surface, although we suspect Dave doesn't feel that way about her. 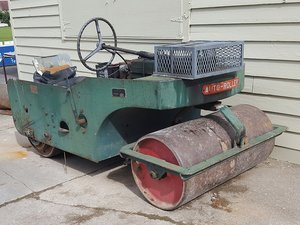 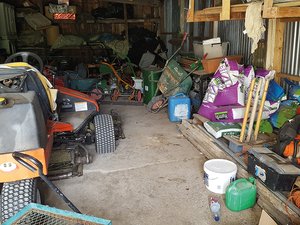 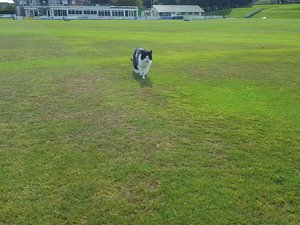