Everyone associated with Somerset County Cricket Club is mourning the sad loss of John Harris, who died last week at the age of 83. 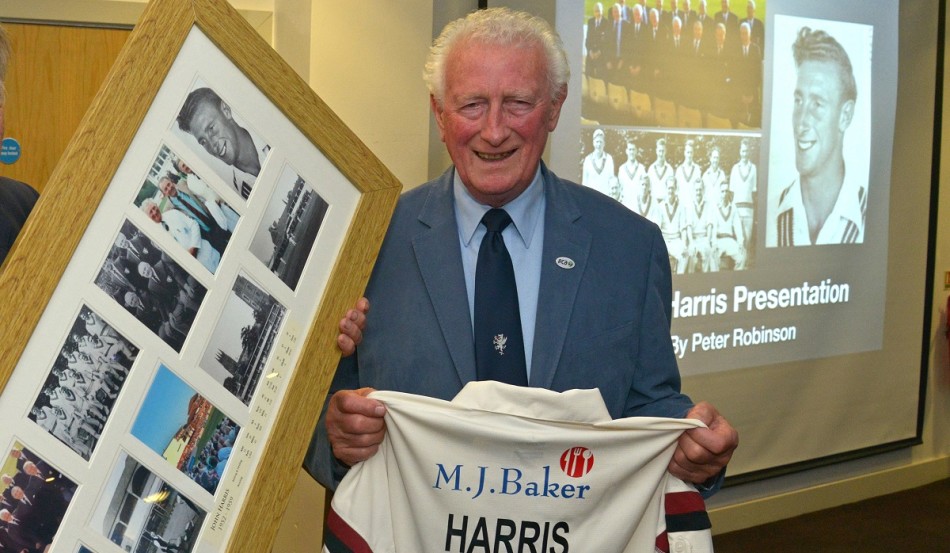 John was born in Taunton on February 13th 1936 and spent much of his early life with his grandfather Harry Ferdinando, who at that time was Somerset's Head Groundsman. Therefore he grew up with cricket coursing through his veins.

He went to live in south-east London when he was 12 years old and it was while he was there that he started to make his mark on the cricket scene. He was invited to Taunton for a two week trial and during this time he was coached by Arthur Wellard, who encouraged John to change his bowling style from off spin to fast medium, which resulted in him being taken onto the staff at the age of 15.

The following season a last minute injury to Jim Redman led to John being drafted into the side for the match against Glamorgan at Swansea, making him the youngest ever player to appear for the County at the age of 16. On his debut he opened the bowling and then contributed 18 to a ninth wicket partnership of 48 runs that he shared with Bertie Buse.

In 1954 John went off to do his National Service, during which he was based in York and played his club cricket in that area.

On his return, John's cricket was mainly with the Second XI, but in 1959 he enjoyed his best season for Somerset. That year he played in seven First Class matches and claimed 12 wickets, which included his career best of three for 29 against Worcestershire at the Imperial Ground in Bristol.

At the end of April 1960 John left the County to take up an appointment as groundsman and cricket coach at Framlingham College. During that time he played minor counties cricket for Suffolk. He then moved to Canterbury and became Head Groundsman at St Edmunds School and a cricket coach at Kent College.

In 1966 John returned to the West Country when he joined Sidmouth Cricket Club where he had a major involvement. At one stage during the 1970s John was captain, groundsman, opening bat, chief wicket-taker and even worked behind the bar.

In 1972 John had an outstanding season for Sidmouth, scoring 2356 runs and claiming over 100 wickets, the first time that the 'double' had been achieved in the club's long history. On the strength of his impressive performances he appeared for Devon in 1975.

John was also a good footballer, and during the winters he regularly appeared in goal for Sidmouth AFC.

After leaving Sidmouth John became Head Groundsman at the County Ground in Exeter for several years, during which time he started to umpire at Minor Counties level before going onto the First Class list in 1983.

John became one of the most respected umpires on the circuit and for a period in the 1990s he was Chairman of the First Class Umpires Association. During the same period he was inspector of grounds for the Devon Cricket League.

In 2000 John retired from the First Class list having officiated in nearly 600 First Class or List A matches.

Since his retirement, John has devoted his time to running Drum Kennels at Sidbury in Devon with his wife Morag, in addition to which he organized the Somerset Former Players Association before handing over to David Gurr, and remained interested in the local cricket scene.

Ken Palmer, who played alongside John on a number occasions in the 1950s, said: "John was in charge of the young professionals when I first joined the Club and he was a great help to me. John had a nice action and I opened the bowling with him for Somerset when he got his career best against Worcestershire.

"For several years John was the Chairman of the First Class Umpires and over the years we umpired together in a lot of games. I always enjoyed his company and got to know him very well."

The date of the funeral is Wednesday April 17th at Sidmouth Parish Church at 12 noon.

The wake will be at Sidmouth Cricket Club following the church service.

For the full article visit: www.somersetcountycc.co.uk