When Europe's top senior golf professionals finished the Son Gual Mallorca Senior Open in May, almost to a man they eulogised about the quality of the course.

The man charged with the day-to-day responsibility of maintaining the 18-hole Thomas Himmel-designed course, hailed as the best on the island, is Welshman Gareth Anwell, who moved to the sunshine paradise to take on the role of head greenkeeper three years ago.

The 32-year-old former Barenbrug greenkeeper of the year has an international team of personnel working under him.

He explained: "We've got a total of 26 greenkeepers, which includes five Brits, 12 South Americans, four mainland Spanish and five Mallorquines, one of whom is my deputy greenkeeper, Toni Alberti, who holds a doctorate in chemistry.

This expertise, combined with the best equipment possible, ensures Son Gual is kept in pristine condition. The fleet of equipment, worth around €2m, is the largest in Europe for an 18-hole course. Most of the fleet is made up of John Deere equipment, but there are also the very best Toro models included.

"We have seven triple mowers - all used for scarifying, brushing, top-dressing; 18 hand mowers are used for the tees, greens and approaches. We have six hectares of bent grass to maintain which is a mammoth task in itself. 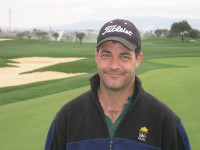 "Joe Devenney, an ex-military mechanic, is our unsung hero here keeping all the equipment in tip-top condition."

The teeing areas are some of the largest - if not the largest - in Europe with a massive 30,000sqm for Anwell and his team to maintain. And it's quite common for visitors to say they're better than most of the greens on the courses they play at regularly.

The reason for this is simple: owner Adam Pamer, a successful German businessman, wanted the best course on the island - and he wasn't prepared to accept second best.

Anwell, who is currently studying to be an A1 assessor with Elmwood College, to be able to qualify greenkeepers at SVQ level two, said: "Mr Pamer wants the best of everything and is very supportive. We can discuss all aspects of the course and the work involved. 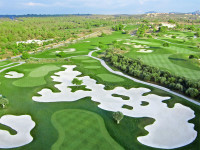 "Representatives from one national association were here recently - I won't name them to avoid embarrassment - and admitted the greens here were superior to those at their two flagship courses.

"The greens then came in for further special praise from Europe's Ryder Cup-winning captain, Ian Woosnam, at the Senior Open. "

Indeed, the 1991 Masters champion said: "It's a bit like Augusta. There are a lot of slopes on the greens. You've got to get the ball on the right side of the hole - if you don't you'll be struggling. Miss it on the wrong side and you're dead.

"You've got to know how far you're hitting the ball to ensure you get in the right position."

His view must have been echoed by European Tour officials who, upon inspecting the course, wanted just one change: slow the greens down.
Anwell explained: "Son Gual presents a very high standard of play every day so for the tournament, when it came, the guys from the Senior Tour didn't make any specifications for the course.

"They were happy with the greens - they actually asked us to slow them down a little bit. But the heights of cut and the quality of fairways … they were just fine with everything.

"They congratulated us on presenting one of the best courses they'd played on during the schedule and said it was great to come to a course where they didn't need to specify anything - the course was ready to play in a tournament straight away.

"For the tournament the speed of the greens on the Stimpmeter was between 10 and 10.5 - normally the greens are about 11, which is why they asked us to choke them back a little.

The greens here have very big inclinations on them so they obviously didn't want the putts to be too tough for the seniors. It can make the greens almost impossible to putt on which is why, I would imagine, Ian Woosnam made the point comparing them to Augusta. We could make them just scary.

"We did nothing special because on a daily basis we try to prepare the very best course we can here."

That he and his team succeed in doing that is down in small measure to Pamer's €2m investment in a water purification plant, which means the course is largely self-sufficient in terms of water usage - a crucial element for any course on the sun-drenched island.

Anwell explained: "The water plant is a specialised system. Spain is at the forefront of this technology. I went to a turf conference in the States and one of the 'gurus' there said he was quite shocked at how advanced the reverse osmosis systems are in Spain.

"You have to use recycled water here. It's the criteria now. And water is the most important thing for a golf course in Mallorca because the temperature's up around 35 to 38 degrees on a daily basis through the summer and we've got rye grass - an English type of grass - so we have to keep it moist.

"It's a very scientific process: high-pressure, a lot of filtration, a lot of chemicals just to treat the water to prepare it so it can go through the membranes to the final process of the whole system. The quality of the water that comes out of the osmosis though is drinkable - better than the drinking water you can get here on the island.

"The plant produces around 45 cubic metres per hour on two lines, so a total of about 90 … at tops 100 cubed an hour. So that's about 2,400 in 24 hours; in the middle of summer we use 3,000 cubic metres of water on the golf course so we bring in some of the water neat and make a mixture.

"To be honest the pure water would also damage the golf course because it would actually leach a lot of the good minerals out of the course. It's a very difficult balancing act - trial and error in a way. A lot of things have been written about it but every golf course is different and you have to do a very stringent fertilising programme to match it and keep testing the soils."

From the reverse osmosis process the water is transferred to the course via a Rainbird Cirrus irrigation system and a staggering 1,795 sprinkler heads.

Yet there's still work to be done to bring the seemingly immaculate Son Gual course up to both Pamer and Anwell's exacting standards.

Last winter the club carried out 13,000m of sand slitting in the fairways and will be undertaking another 13,000m this winter to complete the course.

"That's just helping to move the water through the transition during the summer when we're watering quite a lot," advised Anwell. "We're using more salt so we're trying to get the salt to move through the profile a lot faster so it doesn't cause any damage to the grass.

"Because buggies can drive everywhere on the golf course, in the winter time we want to be completely dry so they don't cause any damage and, of course, we want the fairways to be enjoyable to play after one of the infrequent but heavy Mediterranean thunderstorms.

"The approaches weren't built with any drainage so we've installed a herring-bone drainage system on nine of the holes last year and we've got the other nine to do this winter. For the winter after we're looking at improving the rough.

"It's a lot of work but it does produce a fantastic finish."

And if it's not the general appearance of the course that turns heads at Son Gual it's often the unusual sight of the 1,000 olive trees or the vineyard that sits alongside the fourth, fifth, 13th and 15th fairways.

Anwell said: "We have one guy full-time who just prunes and maintains the trees. We had 1,000 olive trees planted on the course and they have to be tended regularly and when we have to harvest the olives he's also in charge of that.

"We also have one guy full-time working on the grapes so we can get a good crop for the wine. Next year will be the first proper batch so hopefully I can get a bottle …"

And chances are anybody who's experienced the beauty of Golf Son Gual will be only too happy to raise a glass to Gareth Anwell and his team.