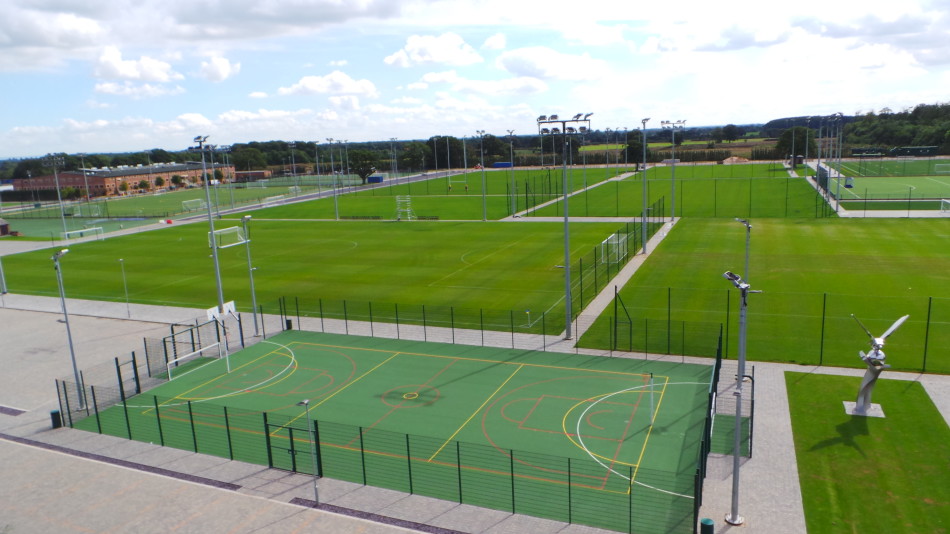 Souters Sports have been commended by Queen Ethelburga's Collegiate in York after the company completed a multi-million pound project which involved a total re-development of the school's existing playing fields and transforming them into professional sports pitches.

Queen Ethelburga's, set in over 100 acres of manicured country park in the Vale of York, is ranked as the North of England's academically most successful, independent co-educational day and boarding school. The school caters for girls and boys from 3 months to 19 years old, offering day, weekly and full boarding places. Founded in 1912, the school boasts exceptional academic success and 2016 saw the school's best ever year for A-level results with over 98% of Year 13 going on to the UK's best universities.

Standards are incredibly high at Queen Ethelburga's, which is highlighted by the school's recent decision to invest over £80m in new resources and facilities. When the school announced that it was looking for a total re-development of the existing playing fields, it was imperative that they selected the best company to embark on the new multi-million pound project.

A project of this magnitude enticed sports turf contractors from all over the country and a rigorous tender process ensued. Souters Sports were part of the process from the very beginning and soon found themselves in the final two. However, there could only be one winner and Amy Martin, CEO of Queen Ethelburga's based at Thorpe Underwood Estate, gave her reasons as to why Souters Sports won the contract.

"When you know that you want a project completed to the highest possible standard, you actually start looking at every detail of the tender process. Souters' presentation was immaculate - it was well presented, well put together and covered every piece of information we were after. They were the most professional company that we met with and they were ready to grab the project with both hands and that was what we were looking for."

The mammoth project commenced in late March 2015 - the site was set-up and earth works began to cultivate and the re-levelling of the existing areas was carried out. The works progressed quickly on the initial project which included:

In a matter of weeks the Souters' team had installed the drainage and irrigation systems and preparation of the footpaths had begun. However, the team soon faced somewhat of a huge curve ball after the installation of a huge LED floodlighting scheme was added to the project.

Ground investigations identified that over 50% of the site was made up of sand which posed problems for the sizes of bases and installation as it was key to ensuring stability for wind loading of the columns once installed. The sizes of the holes that had to be excavated meant that significant impact and damage was sustained to the already completed works.

Nonetheless, the Souters' team rose to the challenge and soon overcame the issue.

"When we decided that we would add in floodlighting we changed the goal posts massively," says Amy. "They (Souters Sports) have a great can-do attitude - and as a team they just started looking to solve the problem instantly. In fact they actually adapted their way of working to suit us, which I don't think you find in many contractors these days."

Going above and beyond the call of duty, Souters' were tasked with other additional work throughout the project which included the supply and installation of a six bay cricket practice net facility; two single multi-games areas for football basketball and netball; one larger multi-games area for netball, tennis and basketball; an upgrade of the existing hockey pitch irrigation system which included a full remote control system; the installation of perimeter fencing for the wet hockey pitch and the artificial hockey pitch; the installation of ball-stop netting systems to all the natural turf and synthetic pitches; redevelopment of a recreational pitch for general play including drainage and natural turf surface; redevelopment of the existing back field which included re-levelling, drainage installation and natural turf surface to allow a further football pitch and two rugby pitches; installation of drainage lift pumps to recycle water from the drainage system and reservoir back into the irrigation system; and additional paving and reinforced vehicle crossing points.

Within 18 months the project was completed and Queen Ethelburga's Collegiate now boasts arguably one of the finest sporting facilities in Europe.

"It truly is an amazing facility, says Amy "The kids love it, the England FA Ladies under 18's love it, the Bath rugby team love it and even the Brownlee brothers who cut the ribbon to officially open it said it was fantastic. It's all big names and sports teams that are saying how good the facility is and that speaks far more highly than myself saying how great it is."

"Overall, I would highly recommend Souters Sports because I'm incredibly happy with the work they carried out. Right from the start they were very good - they are just an excellent and highly professional firm."