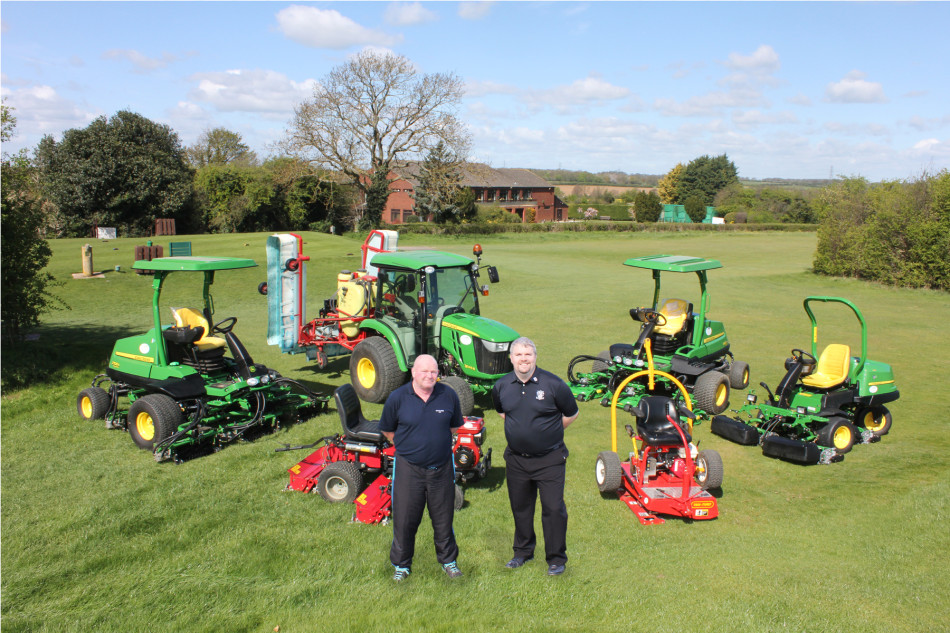 The new 2500E hybrid electric greens mower followed its triplex predecessors the 2500, 2500A and 2500B models in a package agreed with general manager Richard Martin and course manager Tom Hooper. It was joined by a John Deere 8800A rough mower, 7700A fairway mower and 3045R compact tractor, plus a Tru-Turf greens roller and a Saxon LM180 triple mower.

Richard Martin had been in his role for just over a year when he realised that the club had to try and find a way of limiting the amount of time the greens staff were having to spend fixing old, worn out equipment. He and Tom Hooper worked together with Tuckwell to identify the machines required to maintain the course to a higher standard, as well as a finance deal that the club would be comfortable with.

"The club committee pretty much backed us straight away once we proved we had got our facts and figures correct and that the finances were manageable," says Richard. "The leasing solution was the first time we had tried a different approach to buying machinery - it would have been bought outright before.

"The John Deere finance deal gave us six new machines, which put us back where we wanted to be in terms of the course maintenance fleet. With the speed of change in new technology, you can fall behind very quickly in terms of its benefits. With this new deal we decided that leasing would be the better option, and it enabled us to make an immediate improvement to the course presentation.

"The cost of maintenance and repair was a big issue before, with some of the older machines 10 or more years old. The new rough mower replaced two old machines, so now we can manage both the rough and semi-rough much more quickly and easily, as it's so easy to change the height of cut.

"The 2500E is the club's first hybrid electric mower - we had problems in the past with hydraulic leaks on the greens, so that's been taken out of the equation now. The TechControl system on the new A Model mowers is a very nice feature too - it enables Tom to be in control of setting the mowing and turning circle speeds, for more consistent results across both courses. The Quick Adjust cutting units on the cylinder mowers also save a lot of time when changing cutting heights.

"Overall I really believe this has been a great statement of intent by the club," says Richard. "We wanted to improve the quality of the course presentation, the club recognised that and did something about it, and we are now reaping the benefits."