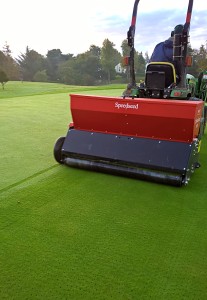 Prior to purchasing the Redexim Speed Seed, overseeding was a timely exercise for Steve and his team of 9 greenkeepers as it was all done by hand. "We'd firstly go out with a sarel roller or aerator to open up the surfaces and then follow that up with applying the seed mix in a cyclone spreader - all of which was a rather time consuming process" explains Steve. To make the task more efficient Steve began hiring a seeder, a Speed Seed as it happened, which he'd used for a number of previous seasons. "We got to know the kit and were really impressed with the build quality and both the ease of use and adjustment it offered. For us it offered robustness combined with value for money so when the time was right we decided to purchase one for ourselves."

The Speed Seed 1600 works by delivering the seed into dimples relatively close to the surface, created by a spiked sarel roller. It is ideal for situations where drill holes need to be avoided. "It's combined the two tasks into one, reducing the time investment which has given us the opportunity to regularly overseed a bent/fescue mix on our greens."

For the last 12-18 months a key focus for Steve has been to reduce thatch levels on the greens, thus improving the efficiency of any overseeding work. "We've upped the amount of aeration and sand applied to dilute the thatch. We've actually used the Speed Seed a couple of times without any seed, putting the weight forward, and using it as a quicker method of sarel rolling. It all helps us to get extra air in the greens. In both of its guises, we've been very impressed with the results we're achieving with the Speed Seed - it's been a win win for us."