by Kerry Haywood
in Multi-sports venues
on 25 May 2018

To the untrained eye, a fence is just a fence. But, when it comes to enclosing sports areas, it can keep balls in play, reduce maintenance, provide safety and security, deter vandalism and graffiti and even be an integral part of the field of play. Kerry Haywood went to visit a recent project at Paddington Recreation Ground to view fencing for a multitude of needs. 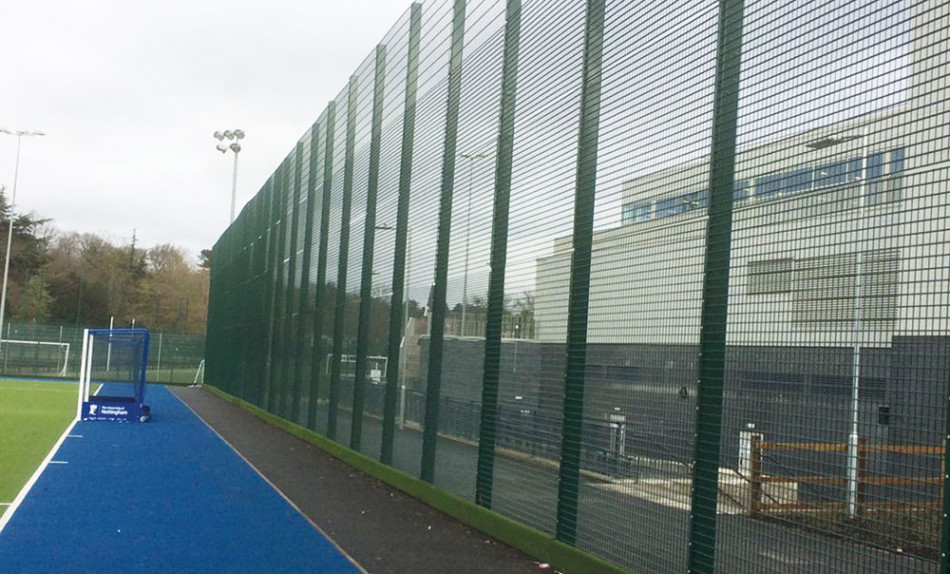 To be honest, it came as quite a surprise to hear all of the considerations and factors that go into the design for the most appropriate fencing solution for different sporting applications.

Perhaps I shouldn't be surprised when I think of the intricacies we often explore on chemicals for turf managers, equipment maintenance or irrigation systems.

The issues of both safety and security are ever more critical for commercial or council bosses in these days and increased propensity for parents or residents to sue, and governing bodies and authorities being seen to do everything in their power to protect children and vulnerable adults.

When thinking about perimeter installations and the benefits from well-specified fencing, railings and gates, firstly, you need to consider what sports will be played on your surface as well as the surrounding areas. For instance, nearby busy roads, railway tracks, canals or rivers and utility stations can all pose risks and potential death traps when balls inevitably escape the field of play. Five metre high fencing will obviously keep more balls within the sports area than three metre and minimise the risk of children running out of the enclosed area to follow a ball, potentially on to a busy main road.

Many specifiers are also using netting above a fencing line - and even as a full canopy roof - to keep balls in. But, even these are imperfect as they deteriorate quickly, require a lot of maintenance and provide a roof or pockets above the fencing where balls can get trapped. And which 14-year-old with a brand new football isn't going to climb up to retrieve their ball?

But net roofs are not designed to take a person's weight and the surface beneath is very hard. Protruding wires at the top of a fence line are perfect snag hazards for a ring as people jump up to dislodge a ball; sadly there are too many instances of fingers being wrenched off in this way - an injury horribly known as degloving!

Secondly, you need to think what is the environment like?; 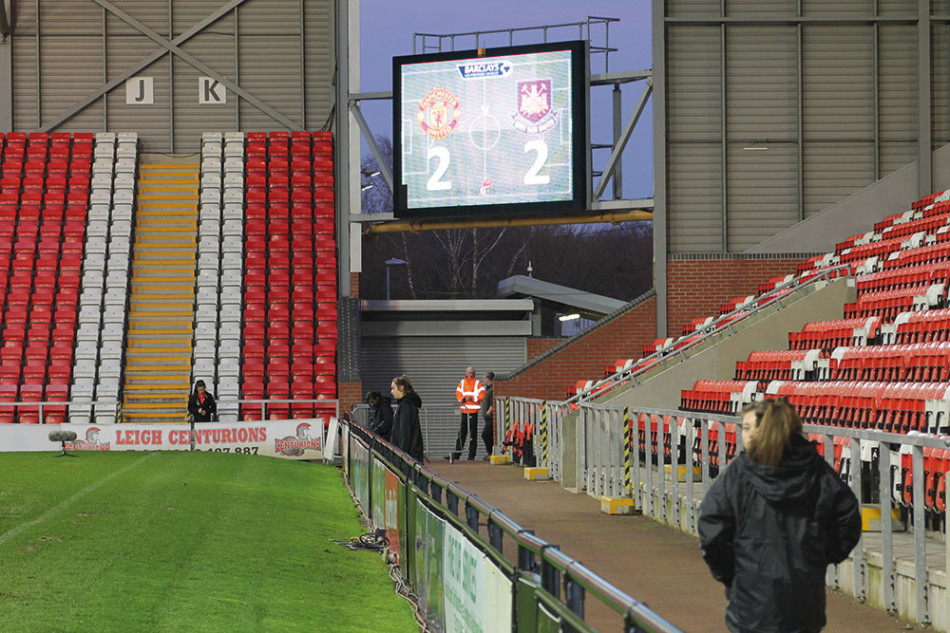 Depending on the answers to these questions, how are you going to restrict access to appropriate players and keep everyone safe, and feeling safe, when inevitable clashes occur?

Also for consideration is what your needs and requirements will be three or five years down the line; if you are planning to rent out the space to provide an income stream, the more you can plan and specify usage at the outset and the more costs you can recoup as it evolves, the better.

Five-a-side football, basketball and netball, tennis and hockey, all require different markings and run-off areas around the pitch or court - and appropriate goal areas. In the majority of cases, these can be incorporated into the perimeter fencing with good planning. So, think about the orientation of play; you might want capacity for a full-sized football pitch, with smaller five-a-side variants running at right angles to that.

A single orientation of play might allow you to reduce side fences to just 1.2m high to reduce cost and create a less caged-in field of play that is more open and inviting. This may not be possible if the plan is for multiple sports use.

You also need to consider the ambient atmosphere. For instance, a pitch near to the sea, where salty air can reduce the life of fencing to a tenth of its normal, would benefit from a special dual-layer ipond coating for the mesh developed by marine technologists.

Many readers may be responsible for stadia, in which case, different challenges come into play. First off may be spectator rigid mesh handrails to a height of 1.1m or as stipulated by governing body regulations.

Secondly will be perimeter security fencing, linking through-visibility and keeping those who haven't paid out.

And, sadly - in this fearful age of apparently random acts of terrorism and lone wolf attacks as we saw in attacks in recent years on the Stade de France and Manchester Arena - protection against terrorist attacks must be considered, including those using a vehicle as a weapon: the latest deadly terrorist attack method of choice.

You also need to be aware of complying with disability discrimination laws. All gates should be 1.2m wide rather than 800mm and typically should open outwards, unless this risks them opening straight onto a ramp or stairway.

Position access gates at opposite corners of the field of play and perhaps colour them differently from the rest of the fencing so they are obvious even in the dark as an escape route for a solitary younger child feeling vulnerable if older teenagers arrive to play.

Fencing for a multitude of needs

Paddington Recreation Ground in Westminster, London, is a fantastic example where multiple types of fencing, railings and gates have been integrated. The use of creative solutions for specific challenges and issues were addressed by Mo Ali, sales manager for sports systems at Zaun Limited.

There were many different sporting applications to consider when looking at this large project, including the following;

Football pitch. The recreation ground includes a sand-dressed football pitch for a variety of sports. The 106 x 64m pitch is surrounded by Duo8 sports fencing for a robust playing area, with rubber inserts between the panels and posts to keep 'rattle' during play to a minimum. 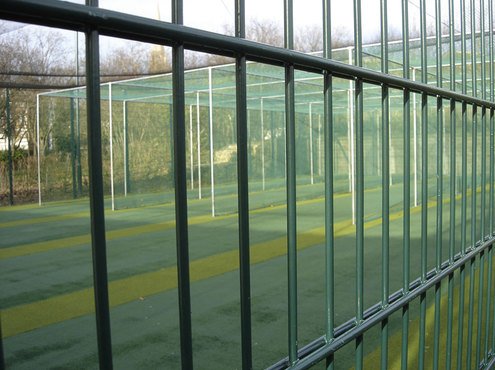 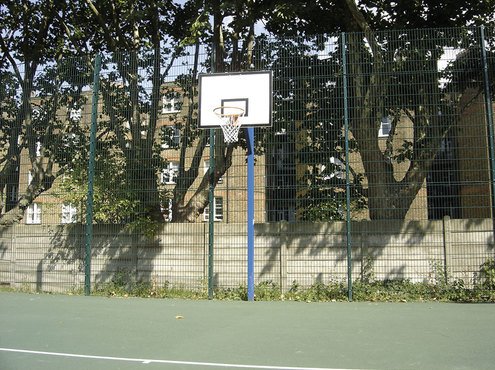 Tennis / basketball / 5-A-side MUGAs. The courts use 4m high Duo8 on the park side but, in order to maximise ball retention, use 5m high fencing on a side that backs onto a housing estate. This area further increases the options available to residents, as two of the tennis courts use Super Rebound fencing and double as 5-A-side football pitches. Integrated lighting columns are installed in the fence line and act as fence posts.

5-A-Side football Pitch. This innovative 3-in-1, 5-a-side pitch has six goal recesses, one at each end and two on each side. This enables one large game or two smaller games to be played simultaneously. The 61 x 37m pitch uses Zaun's Super Rebound system, giving an excellent rebound surface, that lasts longer than wooden boards and allows an unhindered view of the action.

Play areas. Bow top railings are the traditional perimeter for play areas as they are in keeping with their surroundings. They provide high visibility for children playing within and comply with RoSPA guidelines, such as gates which mitigate against the risk of finger traps. Gates are also fitted with self-closers that automatically draw the gates to a close so children can't wander out and dogs cannot get in. The company supplied some curved railings to encircle a round play area near some flats. 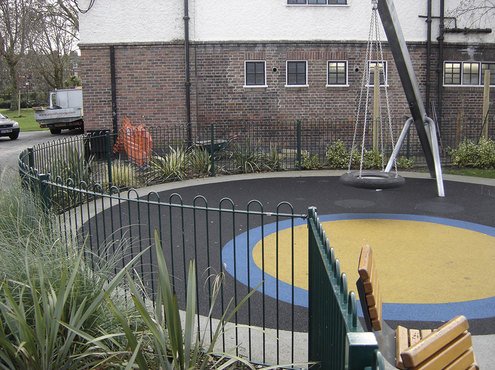 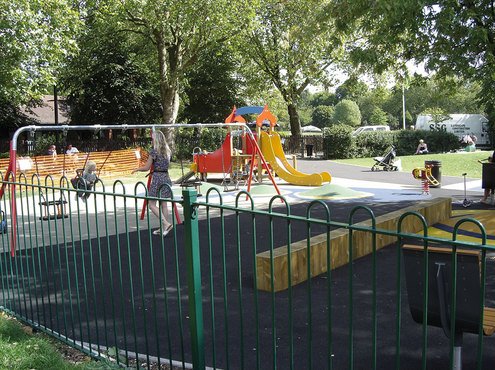 Groundsman's compound. The perimeter of the groundsman's compound in the centre of the recreation ground was secured with 3m-high Duo8 to protect their cabin and groundcare equipment and materials. This included lockable double gates to allow access to maintenance machinery.

Certainly, Mo asks groundsmen and specifiers a massive range of questions before he will make any recommendations on the most appropriate fencing solution for their sports area.

He's on a mission to better inform groundsmen, architects and specifiers on the many benefits they can reap and risks they can minimise from properly specifying what, to most, appears to be just a simple sports fence enclosure.

Firstly, there's professional pride. He says "It's vital that anything I recommend is functional, safe for users, low maintenance, good value and fits in with its environment."

Secondly, he wants to create spaces in which he would want to play and, more importantly still, that he would want his kids to play in.

No Nockers for hockey fencing

The key to successful sports equipment development is a clear understanding of the application of any system.

Founded in 1905, 'The Nockers' is one of the most successful Men's Hockey League clubs in the country, having won the title seven times between 1995 and 2006. 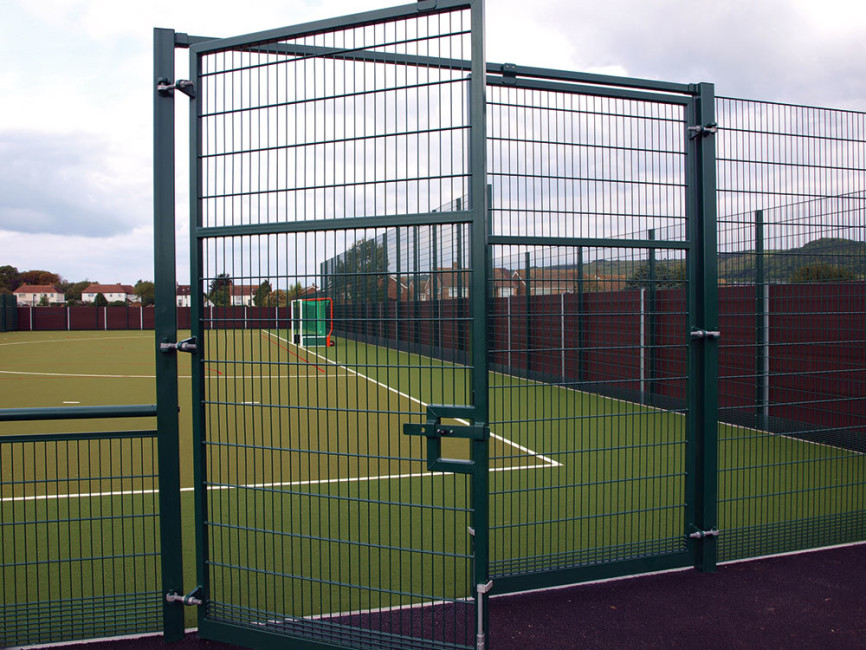 Cannock Hockey Club's Ground Committee President, Ken Bedford, wanted to address some key issues with their perimeter fencing when he looked to upgrade the club's pitches back in 2009. The club was experiencing high maintenance costs to replace nets and wooden boards damaged by constant ball impacts. He also wanted to limit the noise of the wooden boards which was affecting the experience for players and spectators alike.

He explained that a match hockey ball weighed only 5.5 ounces, but could travel at speeds in excess of 80mph in a match. This had led to the club's traditional wooden boards being effectively sacrificial under such cannonball-like impacts. They were in a constant and expensive cycle of buying and installing new wooden boards as they quickly got worn out and broken.

So, Cannock Hockey Club partnered with Zaun to develop a system at its Chase Park site to mitigate the impacts of the high impact sport and to cut maintenance bills by reducing its need and replacing only individual fence panels when necessary.

The Hockey system does away with nets and wooden boards around the ground and replaces them with twin wire mesh fencing, combining the bottom section of the fence with a rebound panel with a close mesh pattern.

The bottom 210mm of the steel fencing system uses a high density of twin horizontal 8mm wires in a close 25 x 50mm mesh pattern - or up to 400mm behind the goals - that reduces significantly the noise while withstanding a far greater number of ball impacts without damage.

The system is then topped with Super Rebound, which gives better viewing, no risk of player or spectator injury from splinters or mid rails and no solid surface for vandals to graffiti.

Fixings every 200mm and synthetic rubber EPDM inserts at each fixing virtually eliminate rattle during play. Tests under the same conditions measured the noise from ball impacts on traditional wooden hockey boards at 97dB, whilst Zaun's system rated only 68dB. A clamp bar covering the panel ends ensures a safe playing surface with no sharp edges.

I will never look at a fence in the same way again - as there's clearly so much more than meets the eye! 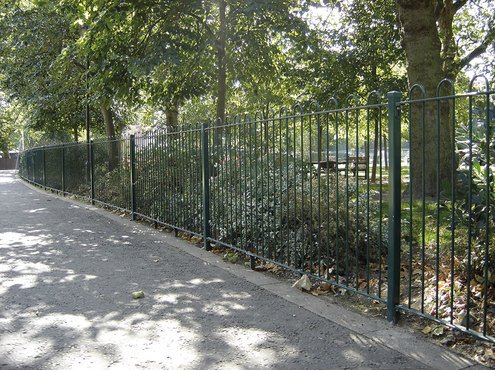 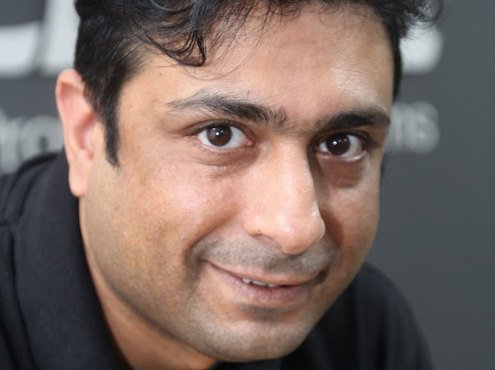