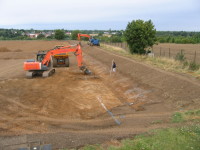 A sports field remodelling project at Hylands School in Chelmsford, Essex, has hit all targets with regard to the environment, the available budget and the provision of additional high-class sports facilities for the school's 900-plus pupils.


Comprising a full-size football pitch with a perimeter grass athletics track, the project involved the re-use of 2,700 cubic metres of soil that had been removed during the construction of a new school building.

"We were faced with two choices," explained Mr Manning, "Dispose of the surplus soil off-site at considerable cost or use it to improve a large existing undulating grassed area that was wholly unsuitable for competitive sports."

"It was not a difficult decision to go for the second option, a move which represented best value and enabled responsible re-use of the soil."

At the recommendation of surveyors, Barker Associates, the company that had designed its new building, Hylands School engaged Gordon Jaaback to draw up a scheme to upgrade the northern pitch, as it is known, into a top-class playing surface, built to Sport England specifications and within the available budget.

Tender documents were sent to five companies with MJ Abbott securing the contract due to the Wiltshire firm's competitive price and high reputation gained on previous pitch and golf course contracts using solely its own machinery and staff.

Commencing in August 2011 and following Mr Jaaback's computer-generated design, MJ Abbott used 'cut and fill' techniques to reposition some 4,500 sq m of subsoil to establish the required pitch levels before replacing the top soil to a firmed depth of 200mm, ready for seeding with top quality perennial ryegrass.

Budget restrictions meant that a comprehensive drainage system was out of the question. Instead, a central camber was formed within the pitch's surface by MJ Abbott to Gordon Jaaback's specification. This was designed to remove excess surface water following heavy rain, with run-off being captured in swales created on three sides of the pitch.

To aid optimum grass seed establishment and growth, MJ Abbott incorporated a high phosphate fertiliser into the soil prior to the sowing of grass seed coated with a natural mycorrhizal growth inoculant.

Sown in September, the grass is now becoming well established and the school is hopeful that the field will be ready for use in early summer 2012. Until then, MJ Abbott is carrying out a full pitch maintenance regime which the school expects to take over next summer. This will ensure that the surface remains both free-draining and in prime condition for the future.